What are the possible meanings of positive "any more"?

Ordinary any more [usually with negative or in questions]

she refused to listen any more

Positive any more is the use of the adverb any more in an affirmative context.

A servant being instructed how to act, will answer 'I will do it any more'

meaning: from now on

Pantyhose are so expensive anymore that I just try to get a good suntan and forget about it.

Can you always substitute it in place of either of these? Does it have any other uses? I can't answer this for myself because as a native British English speaker it sounds totally wrong to me.

The usual hypothesis advanced about the grammars of those, primarily Mid-west, speakers who say sentences like [(1)] is that they have restructured anymore into a free-wheeling lexical item with the meaning of 'nowadays'. [...] This explanation has recently been shown to be unsatisfactory by Labov (1972), who observes that all English speakers balk at items like [(3)] and [(4)].

'In Standard English a sentence of the form: 'I don't do Y anymore' presupposes that 'X used to do Y'. In these 'positive' anymore dialects a complex semantic change has taken place creating a new lexical item anymore-2, which occurs only in positive sentences. Positive sentences of the form: 'X does Y anymore' assert that 'X didn't used to do Y.' Positive anymore speakers still have the old anymore in negative sentences, i.e. as a polarity alternant of still.'

Positive anymore is a feature of the Midland American English dialect. It is the region highlighted in purple on the map below: 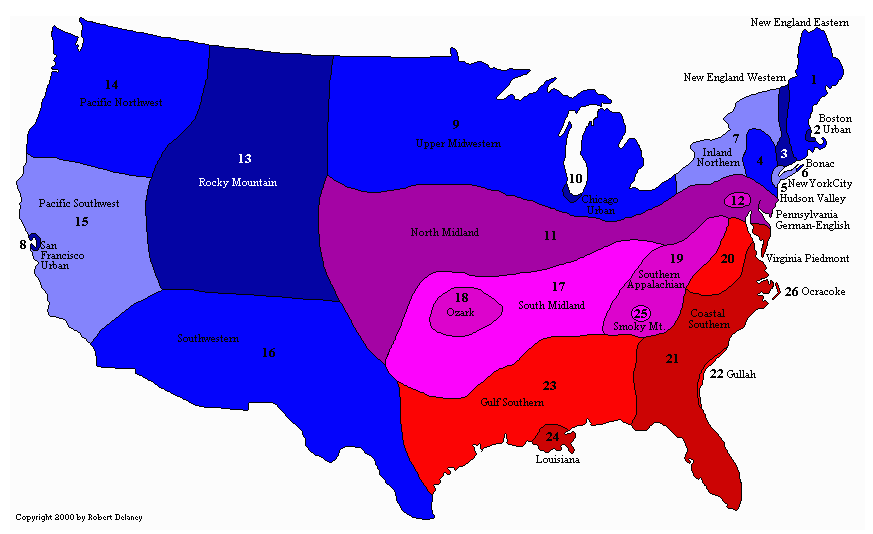 It has essentially two closely related meanings: "nowadays" and "presently". My parents, being from the Midlands, use positive anymore in this way.

Think of it like this: for any negative sentence in which you could use the word anymore, think of the logical opposite of that sentence — you can use positive anymore in that situation, e.g.:

In all forms of Standard English, the word "nowadays" (or "these days", etc.) would be substituted in place of anymore, but you can probably understand the logic.

(One is also able to position positive anymore more freely than negative anymore, like at the beginning of the sentence: "Anymore, I just listen to the radio".)

Yes I have heard any more used positively in the American Southwest - meaning, as noted above, "these days." It is a regionalism, but I don't know its geographic distribution.

Well, to answer "where is it used", according to Wikipedia, it is used more in America:

Positive anymore occurs in North American English, especially in the Midlands variety spoken in parts of Pennsylvania, Ohio, Indiana, Illinois, Kansas, and Missouri; its usage extends to Utah and some other western US states.
Positive anymore also occurs in parts of Ireland and Northern Ireland. Some linguists theorize that the North American usage derives from Irish or Scots-Irish sources.

Interesting to know that it is also a part of Pittsburgh English, of Pennsylvania:

Speaking of examples, here are some examples on how to use it:, and consequently, derive some of its meanings:

The following examples illustrate the use of positive anymore in Irish or American English speech, as recorded by lexicographers or sociolinguists.

"A servant being instructed how to act, will answer 'I will do it any more'." (Northern Ireland, c. 1898)
"Any more, the difference between a white collar worker and a blue collar worker is simply a matter of shirt preference." (Madison, Wisconsin, 1973)
"Everything we do anymore seems to have been done in a big hurry." (Kingston, Ontario, 1979)
"I'll be getting six or seven days' holiday anymore." (Belfast, Northern Ireland, 1981)[4]
"Anymore we watch videos rather than go to the movies." (Philadelphia, Pennsylvania, c. 1991)

It is possible to substitute positive anymore in place of either of these, however, as this is kind of like a slang special to scattered areas in America, it would rarely be used, and people don't usually use it that way anyway, so you might not be understood.

Not the answer you're looking for? Browse other questions tagged word-choice american-english word-usage or ask your own question.

6
What's the "opposite" of "any more"?
11
Should "anymore" be used only in a negative statement or question?
12
Using anymore in the positive
1
use of "any more"
-1
Is there an adverb meaning “now, but not in the past”?

2
What are the meanings of ' and beyond' in 'beyond' in 'Building forms and beyond'?
1
In what situation (if any) you would say "better play positive"?
0
Has the word lust got any positive meaning to it?
2
Usage, origin and the possible Hollywood influence on "terminate" meaning "to kill."
2
Is "dead" possible before any adjective?
1
Any more+comparitive+than
1
Visual conviction