What does it mean to describe someone's chin as “pugnacious”?

If one were to describe someone's chin as "pugnacious", what would that chin look like?

EDIT: In the context where I read it, it was used as a purely physical description I believe; it wasn't situation-specific. Therefore, I don't think it means simply thrust out.

What an odd way to describe a chin.

So this would be the type of chin that belongs a habitual fighter. I think it would be pushed out, assuming an aggressive stance. The jaw would be set firmly, which is also aggressive, and I imagine most strongly that it would be square.

Square-jawed seems to describe pugnacious kinds of people, but I don't have a ready link for this. I'll see if I can find some.

From Paradise pursued: the novels of Rose Macaulay

The description you found was of American portraitist, Gilbert Stuart:

For the impulsive, unreliable Stuart, who left a trail of incomplete paintings and irate clients in his wake, George Washington emerged as the savior who would rescue him from insistent creditors. "When I can net a sum sufficient to take me to America, I shall be off my native soil," he confided eagerly to a friend. "There I expect to make a fortune by Washington alone. I calculate upon making a plurality of his portraits. . . and if I should be fortunate, I will repay my English and Irish creditors." In a self-portrait daubed years earlier, Stuart presented himself as a restless soul, with tousled reddish-brown hair, keen blue eyes, a strongly marked nose, and a pugnacious chin. This harried, disheveled man was scarcely the sort to appeal to the immaculately formal George Washington.

Here's the self-portrait referred to in the passage (hardly a pugnacious chin, I think): 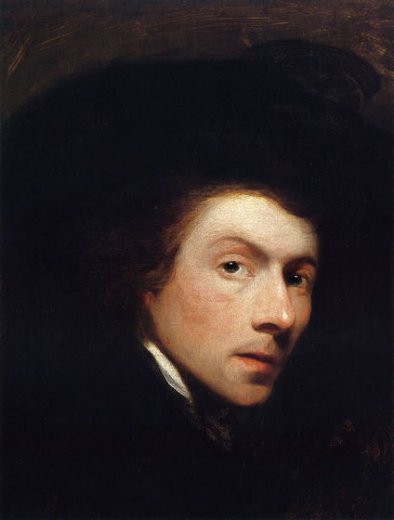 Here's a later portrait of him by Charles Willson Peale (not sure how his nose line changed so much, but the chin's a bit more pugnacious) 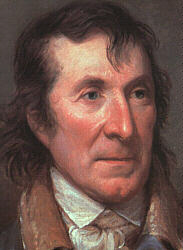 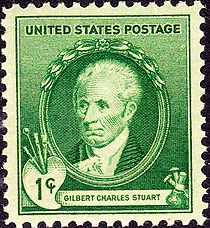 Edit:
One piece I think is missing from the other answers is why pugnacious might mean jutting or square-jawed. I found this at Etymonline:

So, I posit that a pugnacious chin is square because it is shaped like a fist.

The word pugnacious comes from the Latin pugnare ("to fight"). So in normal usage means belligerent or ready to fight.

To apply that to someone's chin is quite subjective. I would imagine it to be pushed out forward in an agressive manner.

Presumably you already know that 'pugnacious' by itself is usually used as a description of a person as aggressive, in-your-face, or looking for a fight, based on the roots that it is 'like a boxer'.

'Pugnacious', when modifying 'chin', is metaphorical. That is, it is a chin like a boxer's (whatever that is), an aggressive chin (one that sticks out), or just an overly masculine chin (Kirk Douglas? George Clooney?).

2
“Collar” meaning “grab or seize by the collar or neck”
4
What does “wipe your chin and walk away” mean?
4
Why is “positive” chosen as the opposite of “normative”, as in “positive statement”?
4
What is the blurring of pixels for fidelity called?
5
What does “GOP's 'Pocahontas' problem'” mean?
2
A word for one thing that is masquerading as two (The “Double Issue” issue)
2
“I have a theory…”. What do I really have?
0
Where is the humour in the following citation?