Origin of the name 'Knickerbocker Glory'?

A Knickerbocker Glory is a type of ice cream sundae, but I'm having trouble finding out where the name originates. Searching on the internet has given me several conflicting answers (e.g. it's named after a hotel in New York, or a man named Knickerbocker, or because it's often made with red and white stripes that look like girls' knickerbockers).

According to the Phrase Finder, though the origin remains unclear, the possible reference to the NewYork via Diedrich Knickerbocker, the mock-Dutch name invented by Washington Irving is a plausible one:

Washington Irving wrote under the pen name Deidrich Knickerbocker, when writing his A History of New-York from the Beginning of the World to the End of the Dutch Dynasty. As a result, the surname of Diedrich Knickerbocker has become a nickname for Manhattan residents in general.

It's reasonable to surmise that some "soda jerk" in Manhattan devised the subject sundae and named it after his home borough.

There is another possible source and inspiration for the tall magnificent-looking ice cream sundae that is the ‘knickerbocker glory’.

The Knickerbocker Hotel in Manhattan, first opened its doors in 1906

... and quickly became a part of the New York social scene. The $3.3 million hotel contained 556 rooms and luxurious restaurants and bars on the first three floors with seating for 2000 for after-theater dinner.

Safe to say that in its day, the sixteen-story high hotel looked particularly impressive, the terracotta and limestone façade made it an instantly recognizable landmark among New Yorkers, and it became renowned for its luxurious décor and grandeur.

However, this all ended with the advent of Prohibition, the hotel closed in 1920/1921, and was converted into a profit-making office building. An article from The New York Times said

“No hotel in the city which ever had anything approaching the popularity and patronage of the Knickerbocker was ever closed in so short a time”, [and added] "many Times Square habitués who fondly recall the pleasing sociability of the famous cafe” will blame the hotel's closing on “the ultra-dry wave now legally experienced throughout the country.”

Which suggests that its unexpected closure struck a chord in the heart of New Yorkers, the legend of its opulence lived on until 2012 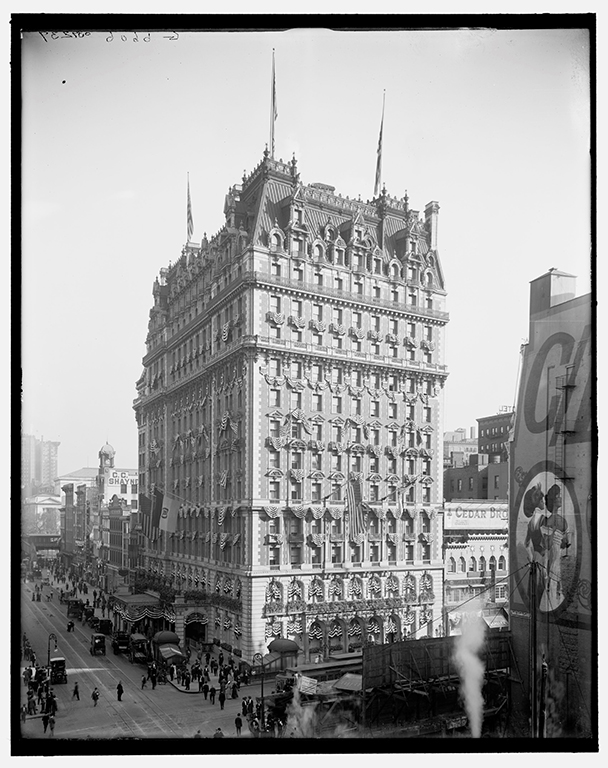 when the entire building was bought, and restored to its former glory. On 12 February, 2015, the Hotel Knickerbocker was reopened to the public.

According to one source, the ice-cream sundae first appeared in print in the 1930s

The knickerbocker glory was first described in the 1930s and contains ice cream, gelatin dessert (referred to as "jelly"), fruit and cream. Layers of these different sweet tastes are alternated in a tall glass and are topped with different kinds of syrup, nuts, whipped cream and often a cherry. Layers of meringue, fruit and even alcohol may be included but, as with an ice cream sundae, there is no precise recipe.

But in an article from The Wireless World and Radio Review, September 22nd 1926—only five years after the hotel had been converted—the dessert is clearly cited, capitalized and set off with quotation marks.

If there is anything better than a “Knickerbocker Glory” at the soda fountain for making the average American gurgle with delight, it's a genuine pat on the back. He likes it laid on thick.
The U.S. Department of Commerce knows this as well as you do, hence the trouble it has gone to in preparing an "honor roll of radiocasting stations." 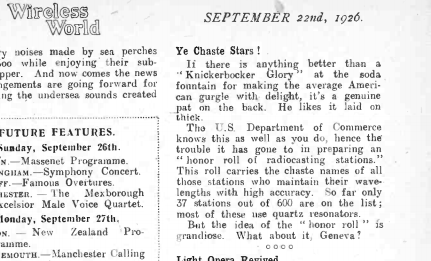 The hotel was tall, it was grand, it was missed by its habitués, and what's more it was pink and cream coloured. Was Washington Irving particularly tall, or pink and cream looking?! The highly-esteemed author, alias Diedrich Knickerbocker, died in 1859, sixty-seven years before the dessert's earliest citation. If anyone can find an earlier mention of knickerbocker glory, I'll eat my Winterbash hat! :)

As the demise of the hotel was still fresh in the minds of New Yorkers, and its physical presence a constant reminder of its brief but glorious past, what better way to commemorate it than by creating an impressive multilayered ice-cream sundae served in a tall glass. The word glory was added because the elaborate ice-cream dish was a glory to behold. It looked glorious, just like the hotel.

Alternatively, it could be that the dessert was but a variation of an ice-cream treat which already existed in NYC soda fountains by the name knickerbocker. An indication that this might be the case is found in a soft drink named knickerbocker shake in the drinks recipe book: On Uncle Sam's water wagon; 500 recipes for delicious drinks, which can be made at home, NYC, 1919. Coincidently, on the same page there's a drink called The Irvington, indubitably created in honour of Washington Irving.

Whip the white of one egg with six tablespoonfuls
of cream and add four tablespoonfuls of orange
syrup and one half glassful of cracked ice. Shake
well, pour into a tall glass, and fill up with milk.

In 1919 the infamous 18th amendment was passed by congress: the transportation, selling, and production of alcohol (liquor) within the entire US territory was prohibited. In her foreword, the author Helen Watkeys Moore justified her recipe book thus:

[…]
Whether or not the wisdom of the measure commends itself to all the people, it is fair to assume that, having become part of the basic law of the land, the American people, being law- abiding citizens, will observe it.

But this does not mean that men and women will no longer become thirsty.

It is the aim of this little book to present a collection of some hundreds of recipes, for making in the home delicious, appetizing, and wholesome drinks, free from the alcoholic taint. In addition to the well-known beverages, such as tea, coffee, milk, and lemonades, there are many familiar by name, but that the average person knows only as they are served at soda fountains.

From the Barry Popkik website, the Oxford English Dictionary contributor and editor of the Oxford Companion to American Food and Drink, lists two even older drinks. The first is in June 1903, the Practical Druggist and Review of Reviews, pg. 93, col. 1: The Knickerbocker; containing ice-cream, chocolate syrup, fresh raspberries, glacé cherries, and rose essence. The second is from The Ice Cream Trade Journal, July 1909, pg. 22, col. 2; called the Knickerbocker Sundae, the ingredients are the same as before.

Not the answer you're looking for? Browse other questions tagged etymology origin-unknown food or ask your own question.