Where is the root in these words: miniature, minimal, minimize?

Is it possible to identify one and the same root MIN in all these words: Miniature, minimal, minimize, minimum minor, minority, minus, minute ? From etymological point of view they all came from one Roman root, but what about Modern English? If we consider MIN as a common root for all these words in Modern English, how shall we treat the other components -im, -ute, -us in those words? As derivational suffixes (if yes, then for sure not in Modern English).

Even if they were derived from the same root in Latin, they came to English by different paths, migrating whatever suffixes they had into root somewhere along the way.

It turns out there are two unrelated roots:

There is the (modern) Portuguese/Galician river Minho/Miño, called Minius in Latin, probably from an unknown root in Iberian, which is assumed to be a language isolate, i.e. not at all related to surrounding languages. From this comes miniature and the modern English prefix mini-.

Then there is Proto-Indo-European *m(e)i- "small" + suffix *-nu (probably a verbal suffix):

In all these English words, only -ize and -al would seem able to produce new words in English; the rest are best considered purely Latin suffixes. English words using the Latin suffixes -tus, -or, -us, -(i)mus, and -ter were generally taken from Latin (mostly through French), not formed in English.

The modern prefix mini- seems to come from the word miniatura, but the etymology keeps going back, linguistically speaking. Read all the answer, when you reach the end, it will take you back to this first part so you'll understand why "it comes from miniatura".

Miniatura comes from the Latin word miniare, which comes from minio (we can stop here, but it still goes back. I'll mention it if you're interested).

The Minio1, in chemistry, is the mixture of 2 molecules of monoxide and 1 molecule of lead bioxide, red-orange coloured, obtained from the massicot. This substance was used in Middle Ages in the "Art of miniatura".

The miniatura was the image painted, with extreme care for detail, to decorate the first letters of manuscripts, something like this: 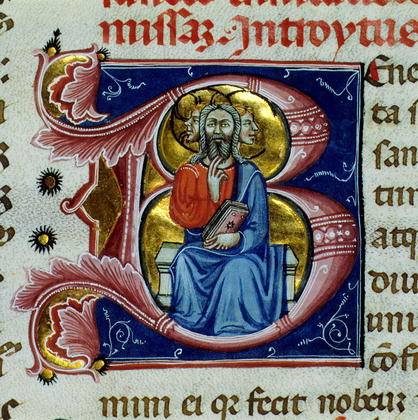 In the italian wikipedia for "miniature", it says (I'll translate it):

(1): The name comes from a river in Spain, called Minius.

Minority and minus come from the Latin word minor, which means "smaller" or "less".

Minute comes from minutus, past participle of mĭnŭĕre, "to make small, to reduce, to shrink".

We can't consider "-ute" "-im" as separated suffixes, as you proposed, because those parts come from the original word.

I couldn't find any proof that all those words relate to each other, and at this point, I could only speculate. My speculation was that "minio" for miniature was the ultimate original word, but during my research, unexpectedly, Greek came into the show and this makes me doubt about my speculation. I'm sorry I can't help you further, hope this helps though. If something comes up, I'll make sure to tell you.

Not the answer you're looking for? Browse other questions tagged morphology or ask your own question.

3
Is *-scule* in *minuscule* a suffix?
1
How to find words which are related morphologically?