What is the lost origin of 'hoodlum'?

The OED Online, in an entry "not yet fully updated (first published 1899)", gives this etymology for 'hoodlum':

The name originated in San Francisco about 1870–2, and began to excite attention elsewhere in the U.S. about 1877, by which time its origin was lost, and many fictitious stories, concocted to account for it, were current in the newspapers. See a selection of these in Manchester (New Hampshire) N. & Q. Sept. 1883.

The Online Etymology Dictionary has this to say on the subject:

hoodlum (n.)
popularized 1871, American English, (identified throughout the 1870s as "a California word") "young street rowdy, loafer," especially one involved in violence against Chinese immigrants, "young criminal, gangster;" it appears to have been in use locally from a slightly earlier date and may have begun as a specific name of a gang:

"The police have recently been investigating the proceedings of a gang of thieving boys who denominate themselves and are known to the world as the Hoodlum Gang." [San Francisco "Golden Era" newspaper, Feb. 16, 1868, p.4]

Of unknown origin, though newspapers of the day printed myriad fanciful stories concocted to account for it. A guess perhaps better than average is that it is from German dialectal (Bavarian) Huddellump "ragamuffin" [Barnhart].

"What the derivation of the word "hoodlum" is we could never satisfactorily ascertain, though several derivations have been proposed; and it would appear that the word has not been very many years in use. But, however obscure the word may be, there is nothing mysterious about the thing; ...." [Walter M. Fisher, "The Californians," London, 1876]

Can we do better than OED Online or Online Etymology Dictionary? 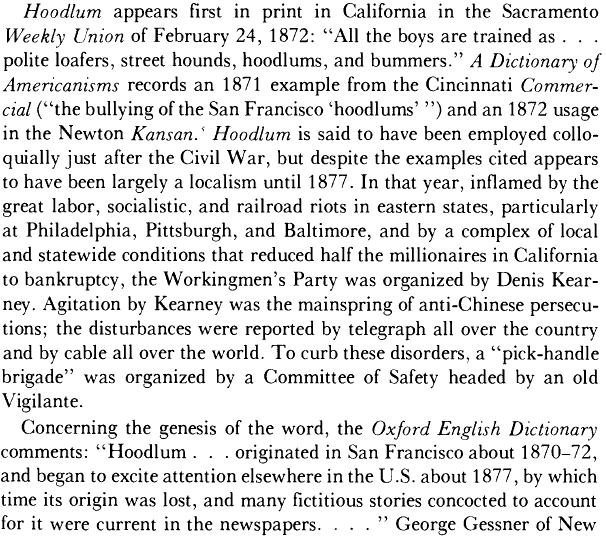 It appears the term has no clear origin, here are two other interesting assumptions:

Wiktionary suggests hoodlums may come from the expression "huddle 'em" that is "to beat them up" (the Chinese migrants):

The following source suggests it may derive from a "mispelling" of the name of the leader of the gang:

Its origin is likely to remain obscure as suggested by Word Origins And How We Know Them: Etymology for Everyone by Anatoly Liberman.

The Hoodlum Band was arrested on December 13, 1866. Refer to The Frederick Bee History Project "Hoodlum" page. From that page:

This is corroborated by the etymology for 'hoodlum' given at WordReference.com:

Hudel m.: a baker's rag for cleansing the hot oven.

(From an archived website titled "Swabian into English - Vocabulary".)

Also from "The Frederick Bee History Project" is this explanation of the popularization of the word:

Summary: On December 13, 1866, William Sullivan, William Frattiger, Christopher J. Conley, John Hamilton, and John Hudson were arrested by the Harbor Police. These boys ranged in age from 10 to 16, and identified themselves as the Hoodlum Band. The gang testified against its fence, Lazarus Moses (aka Fagin). Mr. Moses was convicted and paid his $300 fine. The first reported reference to the Hoodlum Band was in the December 14, 1866 Daily Evening Bulletin. The Hoodlum Band's numerous petty thefts and Lazarus Moses' ability to sell stolen goods popularized the word hoodlum.

The arrest of Lazarus Moses, later convicted as being a fence for the gang, was reported in the Daily Alta California, 15 December 1866 edition. The article reporting his arrest was the first verifiable mention of 'hoodlum', and refers to the name the gang called themselves, the "Hoodlum Band". Moses was a naturalized citizen from Germany, thus tempting the conclusion that the source of the gang's name was his influence.

Not the answer you're looking for? Browse other questions tagged etymology offensive-language or ask your own question.