What's the sailing ship equivalent for "Full speed ahead!"? 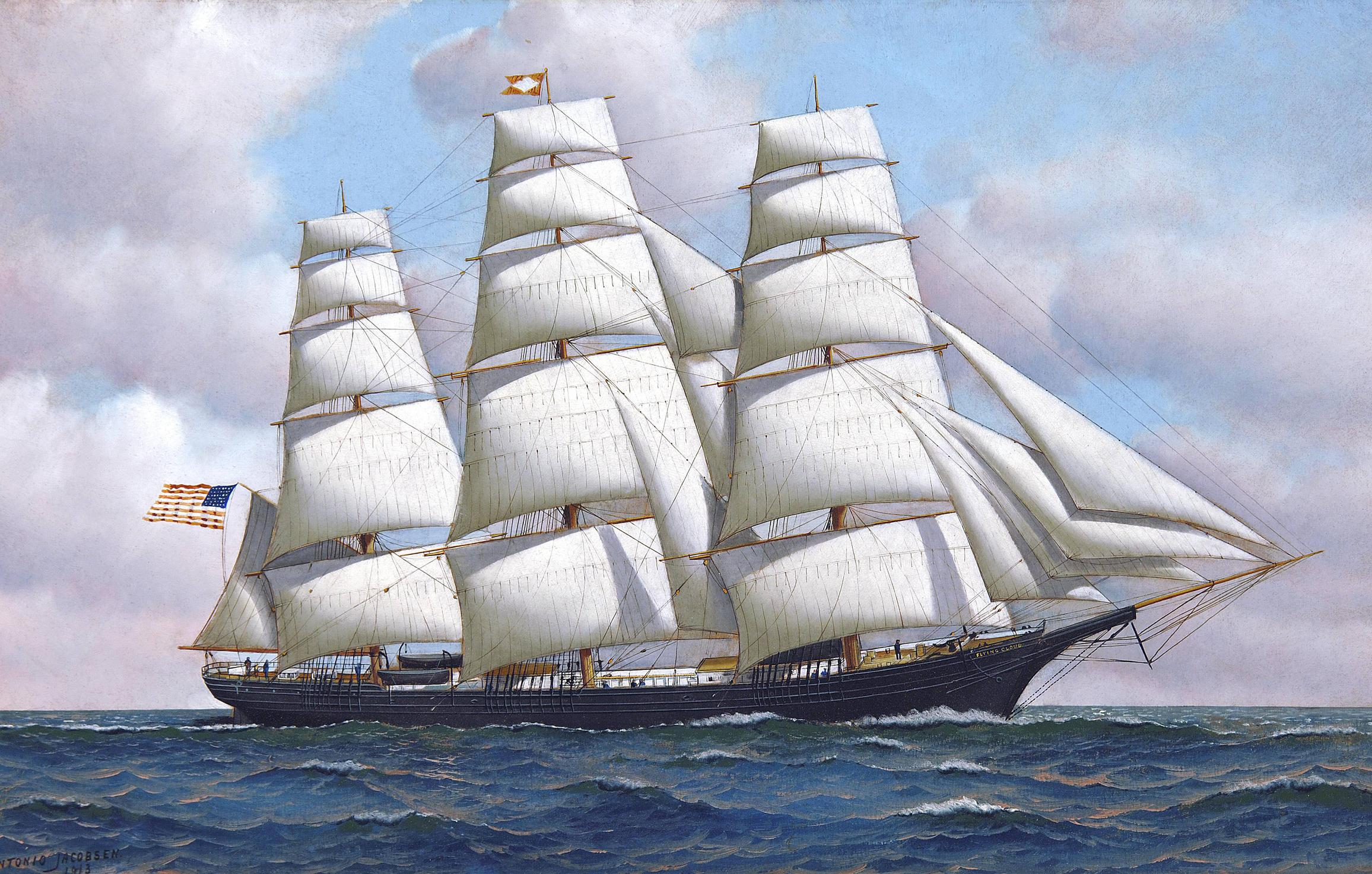 It was "full steam ahead" in the time of steamers. One of the last sophisticated sailing ships was the clipper. They were capable of crossing the Atlantic in something like 11 days. Had crews of up to 30 people. Pretty sophisticated stuff.

The storm is over, the rain has slackened. Time to pick up speed. The captain spreads his shoulders and says ... what, exactly?

phrase-requests idiom-requests
Share
Improve this question
edited May 16 '20 at 2:28

The actions which follow this order can be seen if you Google "let out reefs" to find Ch VI of 'Observations and instruction for ...Royal Navy. 1902'
These actions include letting out the ;reefs' which had shortened the sail, squaring up the 'yards,' tightening halyards, attaching sails. The ship could then be described as "under full sail."

Definition of in or under full sail "With all the sails in position or fully spread:" a galleon in full sail. (Oxford)

If they were 'running before the wind, the wind would be coming from directly behind the boat.

(Spinaker, Gull-Wing or Stud-Sails describe sails set for running before the wind)

A studding sail, studsail or stunsail (traditionally pronounced stuns'l) is a sail used to increase the sail area of a square rigged vessel or 1950s racing https://en.wikipedia.org/wiki/Studding_sail

Antonyms: in irons, three sheets to the wind, bare poles

Several other answers cover the extremeness of "All sail" or "Crowd Sail" etc.

As anyone with sailing knowledge can explain there's no single on switch for the situation you describe.

The sail to be set would be a matter of precision. The ship's officer on duty would want very specific things, and would give very specific orders.

How strong is the wind? From which direction? Does the ship need to tack and does it have enough momentum to do so? Next, what sails were reefed or furled during the storm? It would be wrong to assume that a clipper would strip down to bare masts for a storm (a ship without steerageway is the equivalent of trying to balance on a bike without forward momentum).

So an order to "Shake out", "loose", or "set" certain sails would be given.

The closest catch phrase of the sort you're describing would be an officer delegating to someone else. "Prepare to make way" or "Get us underway" might be commands given to a responsible individual who was to use their own judgement regarding what sail was called for by the conditions, then he would give orders for the specifics.

You should be able to find all of the phrases I've used here: https://en.wikipedia.org/wiki/Glossary_of_nautical_terms

As well as descriptions of the different types, levels, and categories of sails that a clipper might be equipped with.

Edit: I found a good quote regarding the subject of how much sail would be taken in during a storm. {The answer of course is "exactly as much as was needed"}

There is no single definition of the characteristics of a clipper ship, but mariner and author Alan Villiers describes them as follows:

To sailors, three things made a ship a clipper. She must be sharp-lined, built for speed. She must be tall-sparred and carry the utmost spread of canvas. And she must use that sail, day and night, fair weather and foul.

Consider, Set all sail!, Crowd sail! Ngram, and Crowd on!

: (Naut) to carry an extraordinary amount of sail, with a view to accelerate the speed of a vessel; to carry a press of sail. Webster's Revised Unabridged Dictionary

In seamanship, to crowd sail, is to carry an extraordinary force of sail, with a view to accelerate the course of a ship, as in chasing or escaping from an enemy; to carry a press of sail An American Dictionary of the English Language

crowd: to put on (sail) in excess of the usual for greater speed

The storm is over, the rain has slackened. Time to pick up speed. The captain spreads his shoulders and says ... what, exactly?

He certainly doesn't say full steam ahead ... he would deploy more sail incrementally, because that is the way it is done: raise the mainsail, raise the foresail, spinnaker out, and so on. Sailing is a sophisticated art indeed.