Is there a name for this type of heel?

They were astoundingly popular in the 18th Century. They were clunky and not at all comfortable, I'll bet, those shoes. But that's not the point. The point is, what is this type of heel called? 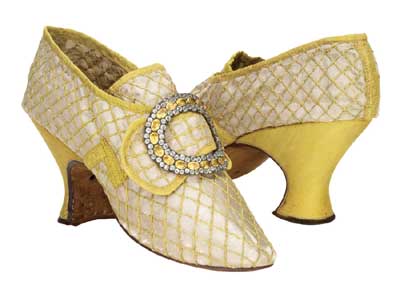 This was the ordinary form for high heels from the end of the 16th to the end of the 19th century (except during the Revolutionary/Romantic era, when heeled shoes went out of fashion); at the time they were simply called "high heels" or occasionally (by those who disparaged their use as effete and foreign) "French heels".

This basic shape, with a recurve profile and flared base, was challenged starting about the 1890s by shapes with single curves and straight profile, narrowest at the base. This shape then came to be referred to as a "French" or "Louis" or "Louis XV" heel (with no disparagement intended), contrasted with "military" heels (straight-sided at both back and breast), "Cuban" heels (straight at the breast, with a tapering curved back, like cowboy boots today), and "spike" heels (tapering at both back and breast to a very narrow base). The French heel finally disappeared in the early 1920s, in part because it was far more expensive to mass-produce.

My first answer was:

"kitten heel" is the closes we have to modern equivalent, but the only thing in common is the height of the heel, not the shape itself (which can vary)

But then I found this: Spool heels: https://en.wikipedia.org/wiki/Spool_heel

It is known as a flaired heel or a Regency heel https://janeausten.co.uk/blogs/regency-accessories/what-makes-a-historically-accurate-regency-shoe

2
What is this type of argument called?
2
Word to describe this kaleidoscope-like motion
2
There is a word for mis-characterization of a political figure
6
Is there a word or term to describe mispronouncing a word due to someone else's accent?
0
Single word for describing author, time, place and type of a document?
7
Word for “to direct attention away from”
1
Type of definition “around a central point” with vague boundaries
0
Is there an adverb for “ungodly”?
0
A name for all AA, NA, SA, … Organizations/Communities?