Why don't we say things are pervious?

Why is the word "pervious" uncommon to the point of being considered a spelling error, but "impervious" is extremely common?

For the record, it is a word, apparently. Dictionary.com defines it as:

My general sense is that these kinds of opposites (formed with in-, im-, etc.) tend to be either well balanced in usage, or the "positive" form is more common. Consider: 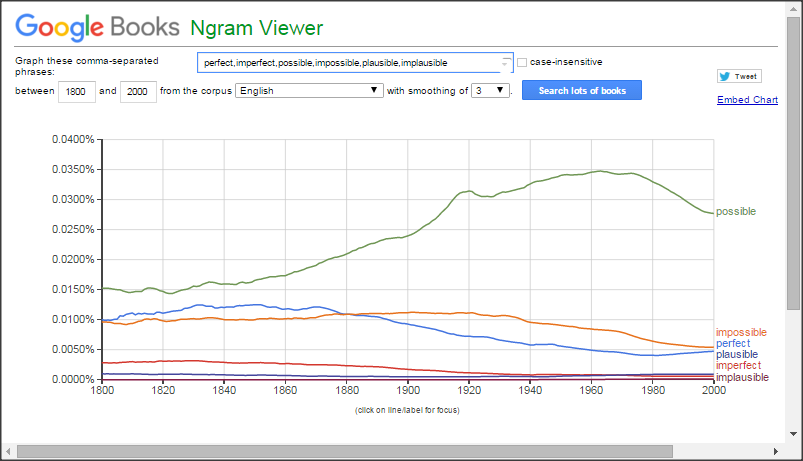 There are a few exceptions to this rule of thumb. "Insurmountable" seems more common than "surmountable," for example. This is again reinforced with an NGram: 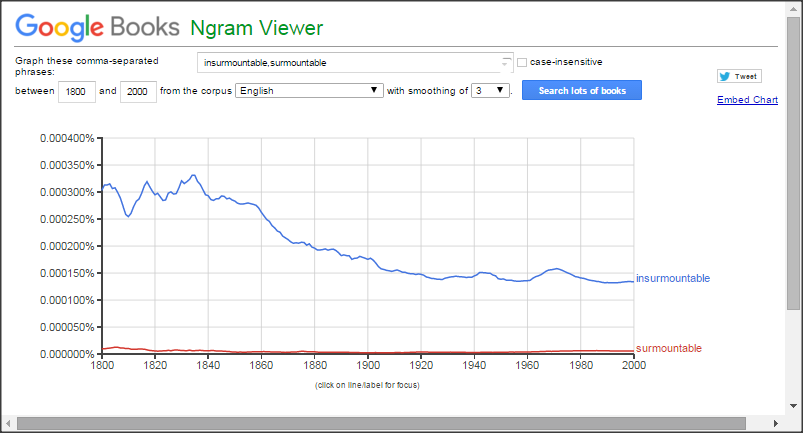 The word "pervious" seems so odd that at first I thought that the word "impervious" must have derived from some completely different source and the presence of im- was just a coincidence. But, no, the etymology clearly points to a root where the positive form "pervious" (from the Latin "pervius") is (was?) valid. 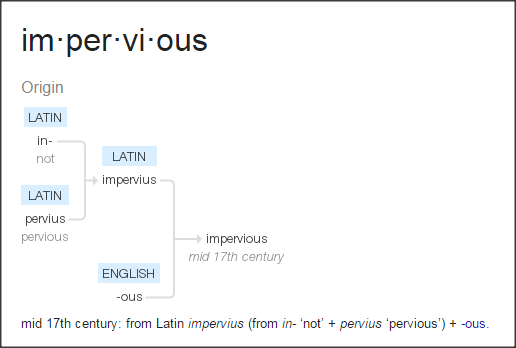 I've considered that the word is just too similar to the abbreviated form of "pervert," which obviously has a strong negative connotation. But this doesn't appear to be a well-reasoned or satisfying answer. Lots of perfectly valid words are superficially similar to words with negative connotations. (Think of a "niggling" pain, for example, although admittedly this example is more common in British English and the racial slur it's similar to is likely more common in American English.) Bottom line, I doubt that people aren't using "pervious" because it's similar to other words.

So this leaves me wondering:

Any thoughts would be much appreciated!

The pervious/impervious pair makes a nice double-foursome with penetrable/impenetrable, permeable/impermeable, and pregnable/impregnable. All four pairs involve the notion of yielding or refusing to yield to incursion or intrusion, and all register at least some matches on Google Books and its related Ngram.

But though some of these word pairs receive equal respect from dictionary makers, none enjoy truly balanced use in print (and presumably in speech). Here is how the Ngram charts for the years 1700–2005 look for each pair.

And for pregnable (blue line) versus impregnable (red line):

Of the four pairs, only permeable/impermeable shows anything close to competitive balance. But until 1900 or so, the next-most competitive pair was pervious/impervious, which is surprising in part because pervious doesn't receive as much respect from (for example) the EL&U spelling checker as penetrable does, despite the latter's prolonged weak showing against impenetrable. (All eight words appear in Merriam-Webster's Eleventh Collegiate Dictionary [2003], however, and the Eleventh Collegiate is very far from being an unabridged dictionary.

The Google Books search results behind the Ngram chart show that pervious is especially widely used in connection with soil and with concrete, asphalt, and other forms of surfacing and pavement.

With regard to why some words that have been in use for decades suddenly or gradually fall out of favor, I think language and competing word choices are so complicated that you would be unlikely to isolate the cause even in a particular instance—and as for reaching a generally applicable truth about how words rise and fall, good luck with that...

I agree with Colin Fine and Hot Licks that 'pervious' is less in need (and would likely be misunderstood). We manage without a positive form of 'bullet-proof vest'. We also don't use corrigible much: Imagine asking one's math teacher if your answer that lost you marks is 'corrigible'.

Not the answer you're looking for? Browse other questions tagged etymology antonyms history prefixes or ask your own question.

26
Is there an antonym of "ruthless"?
6
A word for words that are often seen in their negative forms

11
Why is "dog" in "underdog"?
15
What makes a word offensive?
4
Which form would be correct: cyber security, cyber-security or cybersecurity?
4
Phew! Etymology
2
The half-prefixes
2
Deciding pronunciation of new words that don't obey natural rules of a language
0
How does the original meaning of "but" ("outside") relate to its current 2021 meanings?