Why are scrambled eggs in the plural?

Scrambled eggs don't keep the form of eggs, and yet they are used in the plural. Are they countable? If so, how do you count them? One scrambled eggs and so on?

Scrambled eggs is a dish made from whites and yolks of eggs ....

From "How to Make Scrambled Eggs":

Scrambled eggs are an easy and popular dish for breakfast.

I guess it depends on how hungry you are when you're writing about scrambled eggs.

It's one egg, two eggs, no matter how you serve them. From Spoonful of Promises: Stories & Recipes from a Well-Tempered Table by T. Susan Chang:

At length, I found myself with two egg variations that Noah would eat. Inevitably, they each took a half hour to make (yep, that's thirty times the amount of time it takes to make a scrambled egg).

It doesn't matter that they don't keep the form of eggs. They were "eggs" before they were scrambled, and the term "scrambled eggs" refers to the result of scrambling (multiple) eggs. Grammatical number doesn't have to correspond to the physical form of something: the phrase "a doughnut cut into fourths" is grammatically singular even though it refers to four pieces.

[MASS NOUN] 1 (also scrambled eggs) A dish of eggs prepared by beating them with a little liquid and then cooking and stirring gently.

I don't think it has anything to do with a number of eggs put into a plate/dish of scrambled egg(s). They are just one of many kinds of food that we eat. That's why it could be classified as a mass noun.

In linguistics, a mass noun, uncountable noun, or non-count noun is a noun with the syntactic property that any quantity of it is treated as an undifferentiated unit, rather than as something with discrete subsets. Non-count nouns are distinguished from count nouns.

"Egg" is a countable noun. No matter how many eggs you put into scrambled egg(s), it becomes an uncountable noun. You have to use "a plate of" or "a dish of", "two plates of", etc. to count it. 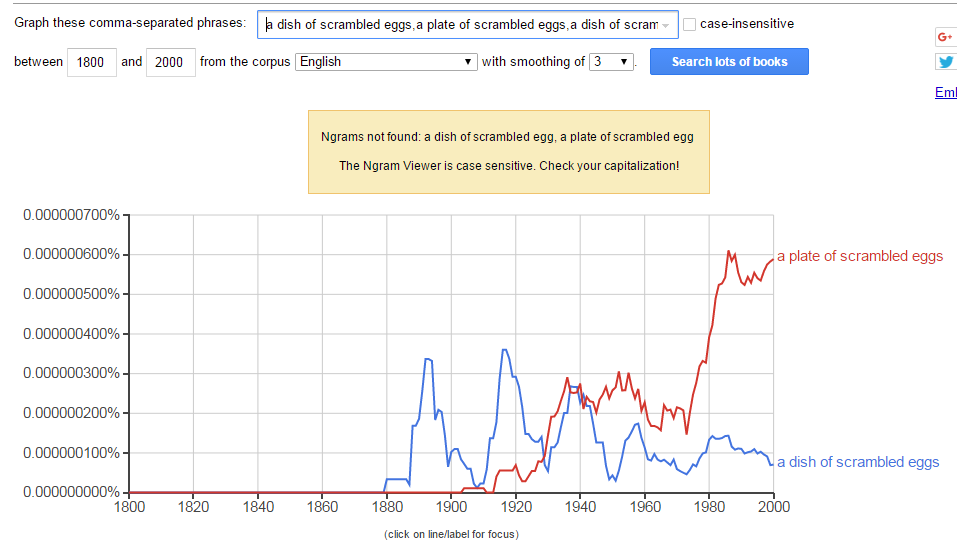 69
Why is “zero” followed by a plural noun?
7
Are these plural or singular?
12
Is 'rest' singular or plural?
2
Why use these words in plural form?
14
Fish Irregular Plural Forms
3
Is there any difference between “tuxedo” and “avocado” with regard to their plural form?