Who coined the term “dummy it”?

As defined by Grammar About.com the “dummy it” is

The use of ‘it’ as a subject (or dummy subject) in sentences about times, dates, and the weather (such as, It's raining) and in certain idioms (It's OK). Also known as ambient "it" or empty "it."

Wikipedia's “dummy pronoun” has nothing about the term's origin. The following page, Uses of It, provides examples of “Pronoun it”, “Dummy it”, and “Anticipatory it” but no mention as to who the author might be. Language Log has only one mention of “dummy it”. And Etymonline has the following for dummy:

Oxford Online Dictionaries says that the term ‘dummy’ is an object designed to resemble and serve as a substitute for the real or usual one, which is where I imagine the grammar term is derived.

Someone must have coined this handy expression. A grammarian, a linguist, a professor of English. If one looks back to the 19th century, there were grammarians who recognized that it did not always refer back to a subject, e.g.;

Not one of these authors mentions "dummy it" and yet that is exactly what they are all referring to.

The dummy metaphor for expletive it appears to have arisen about the year 1902 among vocational educators in Chicago.

The earliest use I find in Google Books is in Edwin Herbert Lewis, A Textbook of Applied English Grammar, 1902. Lewis taught English and Rhetoric at the University of Chicago from 1892-99; in 1896 he joined the faculty of the new Lewis Institute, a "polytechnic school offering training in mechanical arts, liberal arts, and domestic economy for high school and college students (University of Chicago Library)", where he spent the rest of his career and where he wrote the Textbook.

261. We have called the subject of a sentence the part naming that about which something is stated, inquired, requested, or commanded. But this is only a rough definition. Suppose we say, We found an immense fish on the shore this morning. Is the statement made about fish, or about we?
If we emphasize we, then the statement is chiefly about we. If we emphasize fish, it is chiefly about fish. But in any case we is grammatically the subject, for it is a subject-form of the pronoun, and it stands before the verb.

262. Then you will say : Why, in that case, we may be only a “dummy” subject; just a mere form. Yes, we will be only a formal subject if the speaker’s mind was full of the idea fish.

263. Suppose now we say, “It is too bad that father must go away so soon.” The sentence could be written “That father must go away so soon is too bad.” It was used merely to put the predicate is too bad in an emphatic place, at the beginning of the sentence.
When the word it is used at the beginning of a sentence merely to throw emphasis on the predicate, which is then followed by the true subject, it is called the expletive (or unnecessary) subject.

264. In another kind of sentence it is used as a formal subject, but not as an expletive.
It snows.
It is hot this morning.

In these cases the speaker uses a formal subject, it, because every English subject must have a subject. But his mind is thinking of the predicate only. He does not ask what snows—whether it is a cloud, or the sky, or the featherbed of a fairy. He does not care whether it is air or weather or temperature which is hot. The heat exists, and he takes the it way of saying it. Such a sentence is called impersonal.

There are many strikingly “modern” notions at play in this passage: Lewis’ careful distinction between expletive and impersonal uses, his hovering on the edge of a ‘transformational’ understanding of it-clefts, his insistence on defining subject morphologically and syntactically rather than notionally. His use of dummy, however, is not yet the modern use: it’s merely a passing metaphor, not resumed subsequently.

The modern use appears in the following year, in Volume II, Grammar & Punctuation, of Sherwin Cody’s The Art of of Writing and Speaking the English Language, 1903.

Peculiarities of Pronouns.
94.  Though it is an established rule that every pronoun must have its antecedent (expressed or implied), there is one case in which it would be very hard to find anything that could be regarded as an antecedent. When we say “It rains,” [“]It freezes,” “It looks like snow,” evidently it is as nearly devoid of meaning as a pronoun can be. It is merely a dummy subject thrown in to fill up the gap so we may use the verb. The same is perhaps even more true when we say “It is I,” “It is they,” etc., for here a neuter pronoun is made to be equivalent to a personal pronoun, and a singular pronoun to a plural. (The adverb there is used to fill a grammatical gap in much the same way when we say, “There is to be music to-night,” etc.)

According to Wikipedia, Cody was a writer for the Chicago Tribune when Lewis joined the Lewis Institute, at time when

correspondence education was being initiated at the University of Chicago, and he was assigned to writing a home study course English for the Tribune. In 1903 Cody produced a version of his course in pocket-sized book form as The Art of Writing and Speaking the English Language which he advertised in the business magazine The System and elsewhere.

The Art would eventually evolve into an enormously successful self-study program in business writing, marketed for 40 years under the campaign tag “Do you make these mistakes in English?”.

Given their common interest in English education outside the traditional universities, it is not surprising that Lewis and Cody were acquainted; the front matter of The Art includes this note.

The thanks of the author are due to Dr. Edwin H. Lewis, of the Lewis Institute, Chicago, and to Prof. John F. Genung, Ph. D., of Amherst College [Cody's alma mater], for suggestions made after reading the proof of this series.

Over the next 35 years the notion of dummy subject turns up repeatedly in textbooks and dictionaries. It achieves the ultimate seal of academic approval when Otto Jespersen employs the term as a gloss on his “anticipatory or preparatory it” in Analytic Syntax, 1937, pp. 73 and 91.

ADDED:
I have now found a slightly earlier use of dummy in reference not to it but to relative pronouns, in Edward T. Owen, “A Revision of the Pronouns. With Special Examination of Relatives and Relative Clauses”, Transactions of the Wisconsin Academy of Sciences, Arts, and Letters, Vol. XIII (1900), Part I, 1901, pp. 1-140. (A selection from Ch. III was previously read before the meeting of the American Philological Association in July, 1900.) Here it is clear that the ‘dummy’ from which the metaphor is drawn is a tailor’s dummy.

To illustrate more objectively the situation met by the relative, conceive a wedding ceremony and a funeral service to occur simultaneously and so near together, that a woman present may be regarded as part of the group attending each. Thus situated she may cherish the laudable wish to conform her dress to each of her two environments. She is in somewhat the predicament of a simultaneous sentence factor, which might advantageously also suit itself to each of two verbal companies. A harlequin costume, partly festal and partly funereal, is forbidden by accepted usage. Could she, however, duplicate herself in form, while remaining personally one; or could she, in theosophic parlance, project alongside of herself an astral body or fictitious self; this illusory second self she might harmonize in dress with one environment, while her real and primary self conformed to the other. That is, without repetition of her second self, her individual significance, or say her meaning, she might be in formal accordance with her two surroundings. So too of the relative pronoun it may, very figuratively, be said that it is the verbal dummy, on which we hang the drapery of inflections suitable to a second verbal environment. [emphasis mine] —p.60

Since no one seems to have adressed the second concern, I'll try. I will admit upfront that this is just my personal opinion. Take it for whatever it's worth.

I find the collocation dummy it natural to the point of self-explanatory. Dummy (adj.) derives from dumb, and the meaning extends metaphorically, in a nutshell, to "looking real but not functioning or able to be used" ([M-W]). In particular, Etymonline points out the usage of dummy in card games, such as whist or bridge, since 1736. The sense it takes in card games is actually quite close to the grammatical sense explored here: a passive padding within a particular formation.

This sense has been around for a while. It is therefore quite probable that whoever thought of using dummy in the grammatical sense, which you yourself qualify as handy, did not feel the need to further explain themselves, and it caught on (though I'd say it has a tinge of colloquiality).

Summing up, the collocation originates naturally; its meaning follows from the meaning of its parts.

The understanding of 'it' as a dummy subject goes back to some time before 1892, as attested by this from Cassell's New German Dictionary: In Two Parts: German-English--English-German (Elizabeth Weir, Cassell, 1892, 1112 pages): 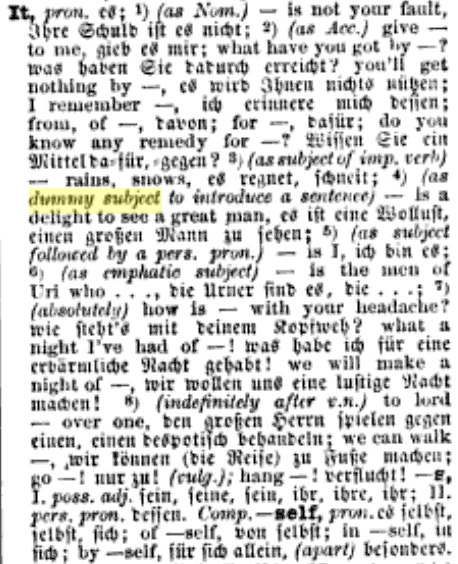 I've been unable to trace it back further, yet this attestation in a general reference is clear evidence the sense was common before the publication date of the cited work.

An earlier work (1879) suggests the sense may have arisen from an understanding of the 'editorial we': 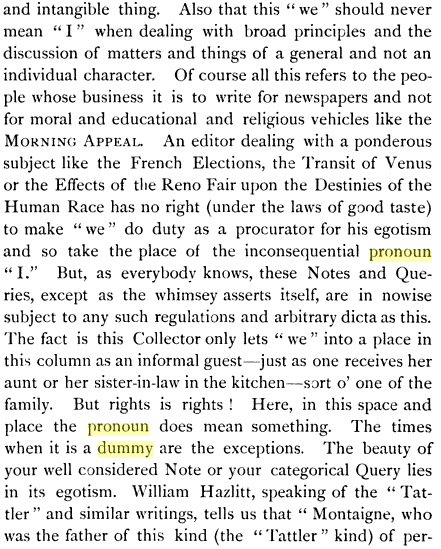 Not the answer you're looking for? Browse other questions tagged grammar etymology history or ask your own question.