Is there a noun meaning: person who accepts bribes?

What is a word meaning a person who takes bribes? Crook is too informal and encompasses too many other things.

I'm looking for a single noun that might describe such a person!

The appropriate word is venal, meaning bribable from the Latin venalis, sale. The venal politician is one whose influence is literally for sale.

Consider something as simple as bribable:

bribable: open to improper influence and especially bribery
Example: corruption in that country is so widespread that there are few public officials who are not bribable

bribable: capable of being bribed

If you need a popular word that any Anglophone understands, I suggest corrupt:

Venal or dishonest
a corrupt mayor.

I like "venal" very much (was about to post it myself), but I'm not sure how many native speakers are familiar with it. So it depends on the target audience. For what it's worth, here's an Ngram demonstrating the popularity of "venal" vs "corrupt" vs other options: 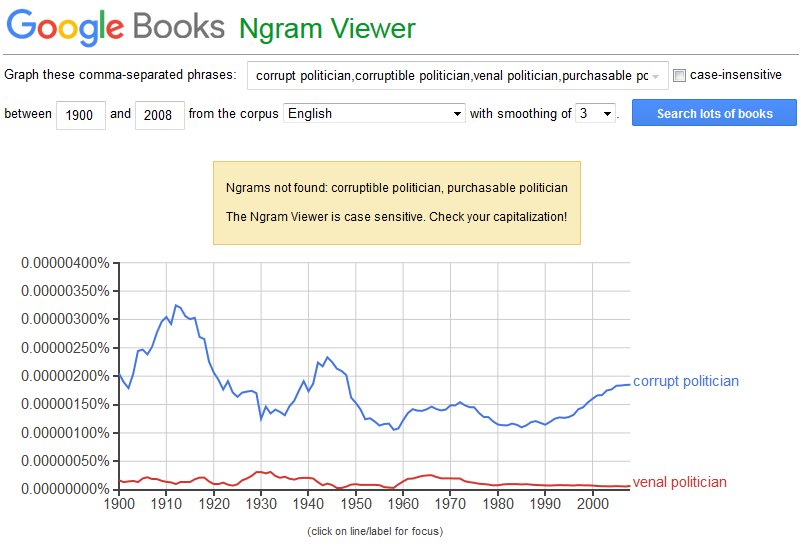 Venal is those who accepts money in exchange of secret service .It is broadly used to describe corruption .But ,I will point out here ,Bribe is broader it may be used many dimensions. Money is also form of bribe so are other services. So ,Venal can be used ,given the context should also be considered.

: undermine or corrupt, as in morals

: to pervert or corrupt by an undermining of morals, allegiance, or faith M-W

: to use corrupt practices such as bribery or blackmail

: (usually followed by with) to attempt to influence or corrupt, esp by bribery: to tamper with the jury Collins English Dictionary

4
Word meaning 'someone who has received a lot'
1
Noun Meaning "Altruistic Hobbyist"?
17
What do you call a person who keeps on going despite setbacks? (in one word, a noun)
1
A word describes the person who tends to stereotype people
4
Word to describe a person who volunteers often
3
Single noun that encompasses both writer and speaker
3
A noun for someone who is shamelessly uncouth?