When was “it” first used in weather sentences? [duplicate]

The pronoun it, which some call ‘indefinite’ or ‘impersonal’, is used for brevity because naming the subject in a sentence would be either too long or redundant, and when we are unsure what the subject is in the sentence. In the case of WEATHER verbs, we know something is the agent of the rain, the snow, the thunder, the sleet, and the storm etc. be it the the sky, cloud, rain, a god, or God; ‘it’ is therefore a placeholder for all these possible and diverse subjects.

The use of the impersonal pronoun, in its strictest sense, is referred to as a Dummy Subject, obeying the letter but not the spirit of The Rule [Thou Shalt Have A Subject In Every Finite Sentence]. One of several: this particular construction is called Weather it, to distinguish it from Distance it
John Lawler

In the original question, the OP asked: Does "it" refer to "the weather?"

A Hand-Book of the English Language: For the Use of Students of the Universities and Higher Classes of Schools. Published in London 1860, written by Robert Gordon Latham, M.A., M.D., F.R.S. (fellow of the Royal Society 1); philologist, and late professor of English at University College, London.

From the aforementioned, comes a novel explanation, one which I have never come across before: between the 10th and 15th century, grammarians believed the subject was Deus, the Latin for God. 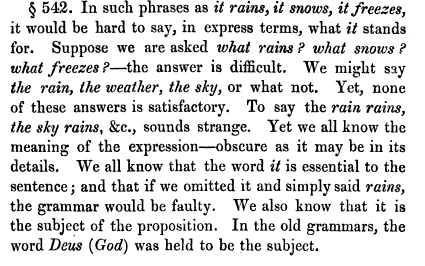 In ancient Greece, the power to command the natural weather elements such as rain and thunder, was thought to belong to another god, namely Zeus. Thus in Homer one reads

In The Communings with Himself of Marcus Aurelius Antonius Emperor of Rome; in 5.7. the author mentions an old prayer common in Athens:

Rain, Rain, O dear Zeus upon the corn-lands of the Athenians and their meads

When that I was and a little tiny boy,
With hey, ho, the wind and the rain,
A foolish thing was but a toy,
For the rain it raineth every day.

But when I came to man's estate,
With hey, ho, the wind and the rain,
'Gainst knaves and thieves men shut their gate,
For the rain, it raineth every day.

But when I came, alas! to wive,
With hey, ho, the wind and the rain,
By swaggering could I never thrive,
For the rain, it raineth every day.

But when I came unto my beds,
With hey, ho, the wind and the rain,
With toss-pots still had drunken heads,
For the rain, it raineth every day.

A great while ago the world begun,
With hey, ho, the wind and the rain.
But that's all one, our play is done,
And we'll strive to please you every day

The following extract was the earliest example I found on Google books, where the impersonal pronoun is the subject of rain.

Edward Halle, English chronicler and lawyer, educated in Eton and Cambridge, first wrote The Union of the Noble and Illustre Famelies of Lancastre and York, also called Hall's Chronicle, in 1542. Another edition was issued by Richard Grafton in 1548, the year after Hall's death, and another in 1550 (The question marks belong to me, as I was unable to decipher the letters)

In the ende of this yere the people were sore troubled with povertie for the great paymentes of money that were past, and also in wynter in the seade [??] season fell suche abundans of rayne in Septembre, Novembre and Decembre, and on the.xvi. day of Janiuer fell suche a great rayne that thereof ensued greate fluddes whiche destroied corne, fieldes, and pastures: and drouned many shepe and beastes: then was it dry tyll the .xii. day of Aprill and from thence it rayned every daie or nyght tyll the third day of June, and in May it rayned.xxx. houres continually wyth out ceasyng whiche caused great fluddes and did muche harme, so that corne sore fayled the next yere as you shall perceive hereafter.

The OED’s earliest recorded usage of "it" in connection to WEATHER verbs (to snow, to rain, to hail, to thunder etc.) is from an Old English translation, possibly written in 10th century, of Bede’s Ecclesiastical History of the English Nation, originally written in Latin, it is said to have been completed in 731.

and a fire be lit and your hall warmed,
and it should rain and snow and storm outside;

Pétur Knútsson a Senior Lecturer in English Language, at the University of Iceland, provides the following footnotes:

The “it” we use in statements about the weather, according to the OED, is part of a broader category of usages in which the pronoun is “the subject of an impersonal verb or impersonal statement, expressing action or a condition of things simply, without reference to any agent.”

These usages would include statements about the time or the season (“it was about noon” … “it was winter”); about space, distance, or time (“it was long ago” … “it’s too far”); and about other kinds of conditions (“how is it going?” … “it was awkward” … “if it weren’t for the inconvenience”).

In this case "It's" refers to an aspect of the immediate environment with which you're concerned. You could substitute "the immediate environment is" for "It's" in most of this type of construction. You can piece together the examples using weather for yourselves, but if you were standing on the lawn and said "it's covered in dogshit!" nobody would assume you were talking about the weather. Alternatively, if you were a member of The National Weather Service and said "it's raining" chances are you would be asked where, since the area which you're speaking about isn't immediately obvious. As to WHEN exactly this type of usage began, it's hard to say. Probably about the same time the apostrophe entered widespread use. Before that I imagine folks just said "it is raining" like a bunch of Coneheads.

Not the answer you're looking for? Browse other questions tagged pronouns history old-english dummy-it or ask your own question.

41
What does “it” refer to in “it's raining”?
2
Does the verb 'rain' belong to some special class of verbs since its subject is always 'it'?
2
“It's cold outside” vs. “There is cold outside”