Is there a word/phrase to describe someone who works from home?

With the rise of the Internet, more and more companies are starting to see increasing portions of their workforce able to accomplish their work from any location with an Internet connection and a phone. In some cases, this can be a part-time thing (such as someone who works one day a week from home but is at the office the rest of the time) or an occasional thing (such as someone who telecommutes when sick to avoid getting his/her colleagues sick as well. In other cases, there is no office for the worker to go to; the worker routinely works out of his/her own home. (For the purposes of this question, I'm not so much asking about someone who has built his/her own business from home (e.g. someone who makes things and sells them on Etsy), but the concept I'm looking for might include such a worker in its definition.)

I am specifically looking for a word to describe someone who works from home full time. The idea is a word (or short phrase) that means: "an individual who routinely works a full time job as part of a larger company, but who does so all or most of the time from a home office."

In particular, I wonder if there is such a word or phrase that specifically includes the word home or a derivation of that word?

There are a couple of obvious candidates that I think are specifically excluded from consideration:

someone who works from home, and communicates with their employer, customers etc using a computer, telephone etc. 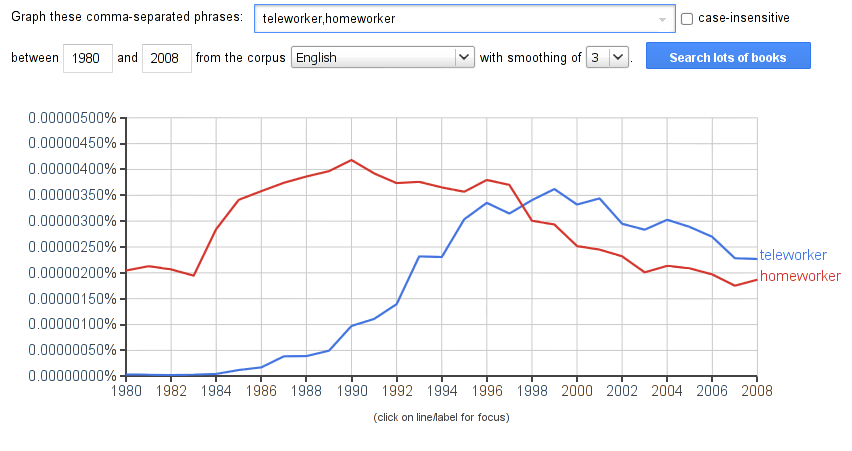 EDIT: As the dictionary definition says, the means of communication with the employer are not limited to computers. Phone, beeper and other means are possible. A teleworker seamstress with no computer is therefore also possible. Maybe she uses her Android smartphone, or a landline, why not? From a job site called Telework Recruiting:

We are looking for an experienced seamstress to become part of our London team. Candidates must be able to work from home with their own equipment.

Telecommuting, remote work,[1] or telework is a work arrangement in which employees do not commute to a central place of work. A person who telecommutes is known as a "telecommuter"

I think homeworkers or home workers is the correct term. It is quite common usage as shown in Ngram below:

I think the only valid answer is "No", there is no specific term as you define it. I think the difficulty is that in looking for a term to describe someone working full-time for a company from home you're also stepping into territory where people do exactly the same work on contract or connected directly with customers.

Note that although the question and most of the answers imply modern, computer-based work what you've described isn't modern or computerised. Before the internet jobs such as typing and dressmaking were jobs routinely carried out by people at home (historically usually women caring for children but not exclusively). Telephone work, either cold calling or responding to support calls, can also be done from any home with a phone.

Complicating this is that the definition given describes people working in cottage industries. In many of these industries they're just called "workers" because that's how all of the work is done - the central office is just a coordinating and warehousing facility. Searching this path might turn up a specialist term but I couldn't find one.

I think the terms you've excluded are all there is (adding "remote worker" as a synonym and therefore also excluded).

Edit: I like the answers by both Stefan and Elian as they're not just synonyms of the excluded terms. There is hope yet for this question.

I guess "home-based employee" (or "home-based worker") would be phrase you are looking for?

(1) Outworkers: Outworkers are contractors or employees who perform their work at home or at a place that wouldn’t normally be thought of as a business premises.

(2) Home Based Business Owners: If they are running their own business out of their home.

At my company this is simply referred to as a distance worker. It sounds like corporate crap but is what it is.

"Remote and stay-at-home" worker or "Remote worker" could be considered.

In the linked article, the writer used "remote and stay-at-home workers" first and continued with "remote workers".

Ther verb "to work remotely" is braodly used to mean "to work away from his employer workplace". The link clearly defines what "remote work" is.

Remote work is labeled many ways. We define it as work completed in an environment other than the employer workplace. This can include working from a home office for employees & contractors and/or working from any other imaginable environment (hotel, beach, in transit, etc.). Remote work is a fast growing trend in the workplace with 3 out of 5 North American workers stating they can work remotely.

6
Usage of "homework," "schoolwork," and "assignment" in AmEng for schoolwork given to students to do at home