A facility, in a rural setting, used to breed and train horses?

In English, there seems to be a specific term for all things equestrian. How is a horse breeding and training facility in a rural setting called?

In portuguese, it is caled a "Haras" (the term is current and very often used). The google translator gives me "horse farm" or "stud farm".

The word Haras exists in english (https://en.wiktionary.org/wiki/haras) but seems to be falling out of use, as this ngram shows.

Is there any more current idiom for this facility, or "horse/stud farm" is as glamorous as we get?

Google Translator is right about both "stud farm" and "horse farm". These are indeed the correct terms:

A stud farm or stud in animal husbandry is an establishment for selective breeding of livestock.

Stud is defined in this way:

a. A group of animals, especially horses, kept for breeding.

b. A male animal, such as a stallion, that is kept for breeding.

c. A stable or farm where these animals are kept.

You are correct about "haras", too. It's a bit more specific, but also archaic:

"Horse farm" seems to be the most widely used term in the US, according to this Ngram: 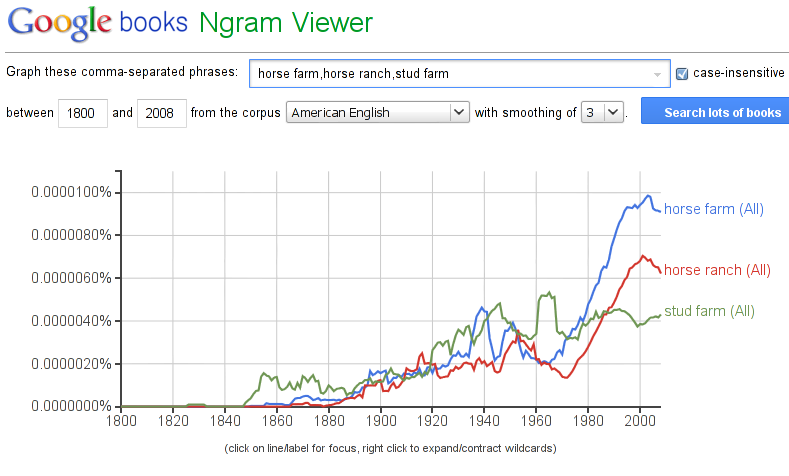 In British English, however, "stud farm" appears to be the most popular term: 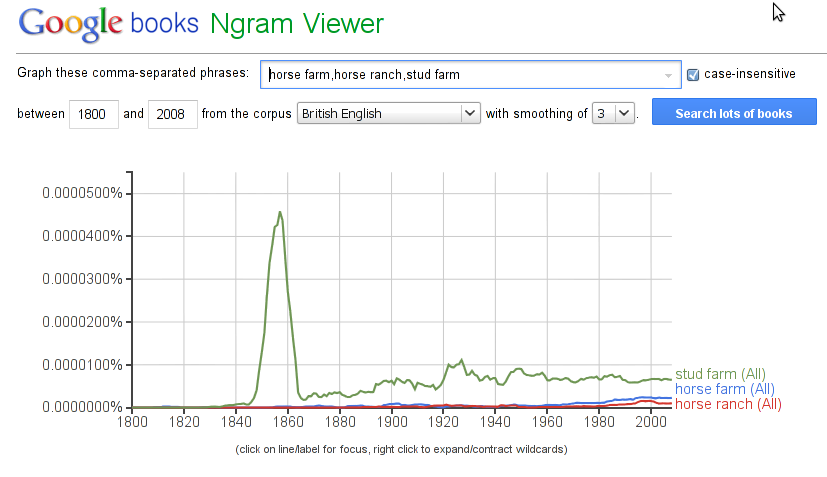 "Ranch" is broadly used as it means:

A large farm, especially in North America or Australia, where cattle or other animals are bred

I think the term you are looking for is stables with a riding-ground: 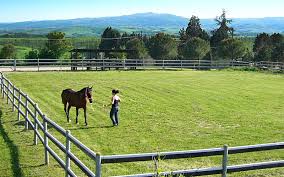 If the haras is a pretty large one, consider calling it a horse [breeding] spread

: a ranch or homestead especially in the western United States M-W

"Ranch" implies, if not denotes, work. If you are seeking a trained draft animal or a horse to herd cattle with, a ranch is the place you go. Horses are not intrinsically part of the definition, but are traditionally present. Thus, you would, if you were looking to get such a horse, specify "horse ranch".

If, on the other hand, you want a horse to race or tool about on, you hit up a trainer's stable. There are, as noted elsewhither herein, multiple sub-types of stables, but you don't need to specify further if those distinctions are not of interest. Similarly, it's accepted as a term for the entire complex and not just specifically the housing.

Re the dialects (Many USA) that I'm familiar with: Neither "horse ranch" nor "stable" will seem quaint if used as described. "Stud farm" would only seem off if used for more than a breeding ground. "Horse farm" would be clearly understood, but would sound a bit childish, and would not be taken to imply anything other than a breeding facility.

7
What's the category name of “city” and “rural”?
1
Word for a large facility that produces and distributes baked goods
0
A word for something which covers the eyelid of horses and lead them to run straight
1
so-and-so/such-and-such term used with countries and places
4
What is a single-word synonym for “train of thought” that would cover exposition to someone else and internal philosophising?
1
What do you call someone who excels at setting and disarming traps?
0
What formal phrase is used when someone started speaking and behaving in a very angry way?
2
Machinery used to change train tracks
1
Word for setting something to the side and expecting to lose it