Why "No smoking" works but "Yes smoking" doesn't?

Why can't we use Yes smoking to indicate smoking is allowed? (Although, we might use humorously but I've never heard actually.)

Unlike yes, no can also be an adverb of degree and an adjective.

Here is the etymology of the adjective no from OED:

Variant of none adj. with loss of final -n, used originally before consonants except h, which ultimately became the standard form of the negative determiner except in archaic or poetic use.

Here is an explanation of the adjective (determiner) none from OED:

In later use the form none (or nane, etc.) occurs mainly before vowels and h, and after 1600 is almost entirely supplanted by the reduced form no (nae, etc.): exceptions are the phrase none effect and before other (see sense A. 2, where its survival may be due to interpreting other as postmodifying a pronominal none).

The earliest example where no denotes that something is forbidden or unwelcome is from a1625 according to OED:

Swet. Mercy yet. Bond. No talking: puff, there goes all your pitie.

No smoking is a phrase but can be used as an attributive adjective also.

The earliest example of No smoking as a phrase is from 1837 (OED):

No smoking aloud in the cabing [sic]!

The earliest example of No smoking as an adjective is from 1944 (OED):

I wanted to smoke, but fell asleep before the No Smoking sign was switched off.

Etymonline has the following for no-smoking (adj.):

Smoking is a vice to [sic] -- and a national one, of such magnitude that railroad corporations throughout all their routes in the United States, have a special command in large letters, conspicuously placed at depots and inside of the cars -- "No smoking allowed here." ["The Sailor's Magazine," December 1840]

I've tried to answer my own question and it can be useful for other people but I would like to get some further information on this.

The original sense of the adjective no is not any. I wonder how it evolved to be used in the phrases like no smoking, no pets etc.

Also, "Yes smoking" could be a useful shortcut but didn't become a set phrase. It is related to yes not being an adjective but language evolves. It can be explained regarding evolutionary linguistics as well.

I think we will stick to "Smoking allowed" for now.

No as an adjective is used to negate the default state of affirmation. Negation and affirmation are not perfectly equal opposites: in general, a mentioned thing is presumed to exist or be true unless it is explicitly negated. This is admittedly a convention rather than an underlying natural law, but it's one that goes very deep and crosses many cultures and disciplines.

In logic, for example, the statement

is true if x itself is false, and false if x is true. The function word NOT performs the negation. To create the corresponding affirmative statement, we need no function word, and the statement is simply:

which is true if x is true, and false if x is false. Likewise, in programming, a code block that begins with

where the ! character serves the same purpose as NOT, or as the adjective form of no.

So the reason we don't use yes as an adjective is because it's not needed: its function is served by the absence of no. Now, it's true that a sign that merely says "Smoking" may not be well understood, but that's only because "No Smoking" is not a complete sentence. When we see a "No Smoking" sign, we understand that the message it's really conveying is "No smoking is allowed"--and of course we don't need any form of yes to convey the opposite message, "Smoking is allowed."

We don't see "Yes Smoking" because, where signs are concerned, the opposite of No smoking is Smoking 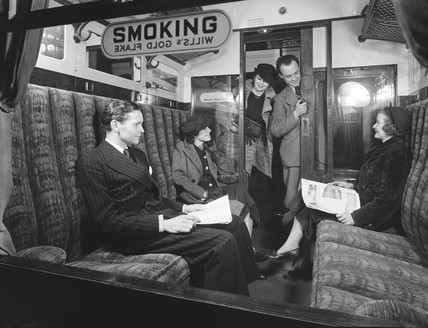 Since your question is basically "Why doesn't Yes smoking work?" it is helpful to start with yes before moving to no.

Yes is a particle or an interjection, or a noun directly referring to one of these. As such, it is almost always understood as a one-word sentence.

No can be the opposite of yes, but it also has other meanings that can't be negated to yes. No is also a determiner meaning not any and none. The antonyms of these are any and some.

No is also a determiner meaning not any and none.

He has no apples.

Does he not have any apples?

How many apples does he have? None.

Does he have any apples?

How many apples does he have? Some.

So, to negate No smoking by adding another word, you could say Some smoking, but the most normal way is to simply not negate it in the first place: Smoking.

Not the answer you're looking for? Browse other questions tagged etymology adjectives phrase-usage language-evolution or ask your own question.

2
Why is it called 'passive smoking'?
35
Indefinite articles used with plural nouns: It was AN amazing TWO DAYS
6
How does one get raunchy?
4
Origin of the term 'smartphone'
10
What’s the history of the adjective “dwarven”?
3
Is wisest here an adjective or noun?
7
When did "our" stop being used as an adjective (as in "other our dominions", "any our Subjects")?
2
Absent the doctor - a 'hanging' adjective?
13
Origin of 'bog-standard'