Term for a roof pitch viewed from inside (Image included)

I wonder what an English speaking person would call a roof pitch viewed from inside the house like seen in the image below: 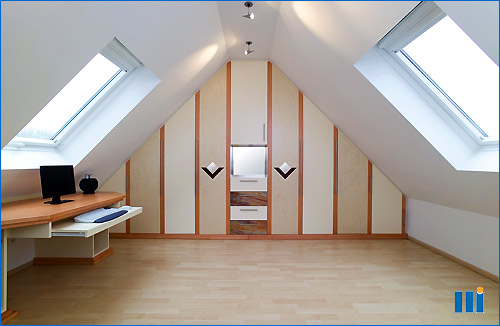 The desk is placed beneath ___

In the UK at least, the desk in the picture is in an area known as "in the eaves",

Also think about storage, as built-in space can often be included, especially in the eaves. (-- Home Owners Alliance website)

or "under the eaves":

A bed tucked behind a curtain under the eaves makes for a charming den. (-- House & Garden magazine, Dec 2012)

In my experience, it would be understood that "in the eaves" means an area with reduced ceiling height - no-one would expect to be able to stand upright there.

Historically, the eaves themselves are the external parts of a pitched roof which overhang the outside wall. By proximity, the name is now associated with the part of the inside roof space nearest to the eaves.

EDIT to clairify - this only applies to the part of the space next to the (low) wall. Your question asks about the ceiling and could refer to anywhere in that space. I'd just call that a "sloping ceiling".

That is a gable roof or pitched roof:

Seen form the inside it is called gable ceiling:

The Gable Roof: History of a Common Roof Construction Style.

I am an English (American) speaker and an architect, and these are my answers to the two questions I think you are asking:

I would not call this a gabled ceiling. In fact, I have never used or heard of the term, and if an eHow entry is the source I would be skeptical.

The desk is placed beneath the rafters.

Even thought the rafters are covered over with plasterboard you are still under the rafters.

squeeze shelves under the rafters

Cabinet under the rafters

Kids’ Rooms: Under the Rafters

Up high under the rafters, this white on white bed easily doubles as a reading nook by day.

No hay now, just a pretty bed under the rafters

The loft bedroom is a romantic getaway with a queen bed under the rafters.

It's called a "vaulted ceiling".

Vaulted means arched, but when it come to roofs and ceilings it also refers to any sort of triangular truss as well. The truss can be hollow as in your image or consist of cross members of varying degrees of complexity.

Here are some other examples of vaulted ceilings as a simple google image search which indicates how commonly the phrase is used to refer to such an arrangement.

"The desk is placed beneath a vaulted ceiling."

"The room where the desk is situated has a vaulted ceiling."

The desk is placed beneath a gambrel shaped ceiling (or put more simply, a sloping or attic ceiling).

gambrel roof: a roof with a lower steeper slope and an upper less steep one on each of its two sides M-W

My impulse would be to say "in the garret" or "under a garret window." The definition of garret window is apparently "A skylight that lies along the slope of the roof," so this seems to fit well.

The desk is located under a skylight which is:

A window set in a roof or ceiling at the same angle.

Its not important to describe the roof, since the fact that its angled is part of the description of the window.

Your desk is next to a dormer window in an upper half-storey.

Your desk sits within an upper half-storey. It also happens to be next to a skylight style window.

And just for fun, here's a discussion about story vs. storey. Apparently, as an American, I am supposed to leave the "e" out, but I learned it with an "e" and I am keeping it!

2
The term for the space beneath a “cathedral” ceiling

4
What is the word for an image hidden inside a painting?
13
A term for a particular makeshift lock (image included)
0
What type of lock is this? (image included)
17
Is there a special name for these big balloony toys in parks? (image included)
5
Word for pending project or collaboration
0
adjective describing outcome of simulation using actual as opposed to approximate inputs
8
A word/phrase for when something is very close to closed but not completely
3
What do you call a house which has a yard outside?
3
Prefix Meaning "At Most"?