Word for inlets of a mountain

Can the word inlet be used for mountains, too? I'm looking for a word that describes valleys that reach into the mountain, but don't go across it.

Here is a picture that tries to describe what I'm looking for. 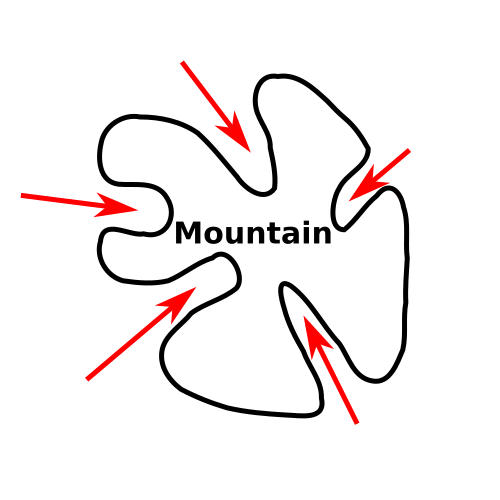 I found this picture with a coulee. Is that a good word?

I'm not specifically looking for steep valleys or canyons, but rather for soft valleys.

EDIT: Thanks a lot for the input. I think I'm going with “a valley that reaches into the mountain but doesn't cross it”. I think notch is also good, but isn't as easy to understand for non-native speakers, which are my targeted readers. Seems like notch isn't what I want either. Maybe combe?

I suggest valley or, more specifically, U-shaped valley which, I presume means open-ended. 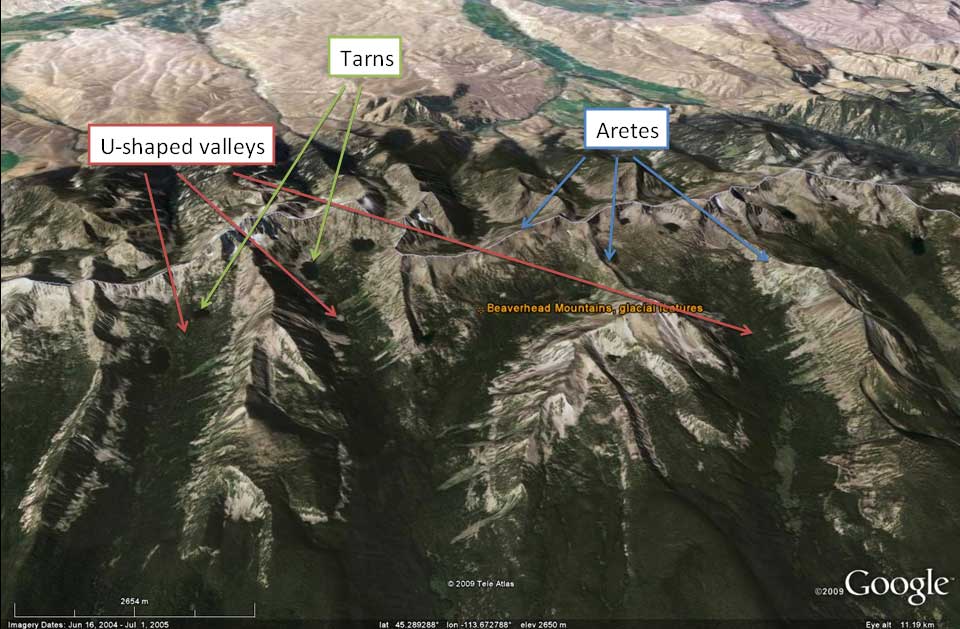 cirque A steep-walled hollow in a mountain side, shaped like an amphitheater, or bowl, with one side partially cut away. Place of origin of a mountain glacier.

gully a ravine formed by the action of water.

couloir a steep gorge or gully on the side of a mountain, especially in the Alps.

I have found a diagram that I think covers the subject pretty adequately.

A draw differs from a valley or an arroyo, in that the ground always slopes downward from a draw in only one direction, and upward in the other three.

To be more specific than valley, it's a combe. Alternative forms are "comb", "coomb" and "coombe".

It defines a short valley or deep hollow, esp in chalk areas, a valley enclosed on all but one side. 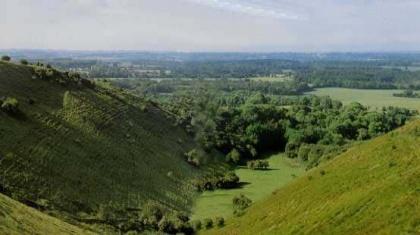 Inlet is used only for water-filled valleys, so wouldn't be appropriate. Valley is correct to describe these formations. Most valleys do not go 'all the way across' a mountain. That would be called a 'pass'

Worldwide there are lots of local words for this type of thing. One of my favourites is cwm, (pronounced "koom") originally a Welsh word but accepted in English, meaning a small bowl-shaped valley. You have already mentioned coulee, which is more general and could be applied.

Another English term for something similar, but specifically with steep sides is corrie (from the Gaelic coire). They can also be referred to as 'bowls'.

(Incidentally, the definition of cwm is evidence of the use of valley for a formation that doesn't go all the way across a mountain.)

As you can see on Bald Mountain: 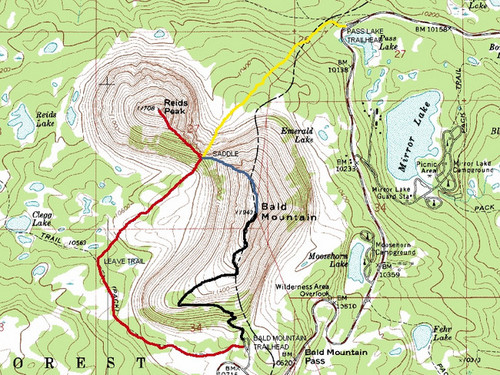 A series of notches can create a saddle.

: a deep recess or small valley in the side of a mountain M-W

I would call such a feature simply a valley. In contrast, a passage going through the mountains, across a saddle point between two or more peaks, is what I'd call a pass.

Note that even valleys formed by rivers or glaciers — which, by their nature, inevitably slope in one direction, away from the mountains — can be quite long, and surrounded by multiple distinct peaks and saddles. Thus, it's quite possible for there to be several relatively low and easily passable ways in and out of a valley — even if, typically, there's only one way out of a valley that doesn't require you to go uphill at all. If I wished to emphasize that a particular valley was completely surrounded by mountains on all sides but one, with just a single easy way in and out, I might describe it as enclosed, or as a cul-de-sac, or indeed simply as "surrounded by mountains on all sides but one".

(And no, whether the valley is "U-shaped" or "V-shaped" has nothing to do with it. Those terms just describe the cross section of the valley, glacial valleys being typically U-shaped, while river valleys are often V-shaped.)

In the southeast U.S. these are called "hollers", which I always thought was a heavily accented pronunciation of "hollows". Or maybe it's because you can shout across one holler, but not from one into another.

An example of usage might be, "I think Jim keeps his still up the holler." Or if you are hiking with a bunch of kids that keep asking how far it is until camp, the stock answer might be "just around the next holler" (of course, this never comes true).

Dale is roughly synonymous to valley, but has a softer connotation I think. See Wiktionary.org:

How about canyon? And, if it goes nowhere, box canyon.

Colloquially these are often called crags or clefts.

A lot of this is very colloquial and the differences between them if any, are very location specific. In the northwestern U.S., the word I most often heard was:

Gorge: (1) a narrow cleft with steep, rocky walls, especially one through which a stream runs. (2) a small canyon. (Source)

I suspect most of the problem is that there are a bazillion borrowed words that refer to that small space between two ridges that, themselves, lead to the peak of a single mountain. I was most entertained by the rare synonym "khor," which apparently originated in the Sudan (not usually the place to inspire images of tall mountains) as a "dry watercourse or ravine."

Depending on the mountains (and location), the inlets could be considered fjords.

Another word that could work (depending on the imagery you wish to evoke) is slope. In a general sense, that could describe any of the sides of the mountain.

Not the answer you're looking for? Browse other questions tagged single-word-requests geography image-identification or ask your own question.

7
Word for crossing the bottom of a valley

13
How to refer to the "elevated areas" of a mountain?
0
What's a synonym for the profile of a mountain?
6
What's a word for doing something eagerly despite the pain? Especially in the context of eating something hot or spicy
0
More friendly word for "enterprise"
1
A word for describing thinking of something as better
0
A word/characteristic for "all bark and no bite"?
0
Single or small number of words opposite of "soft focus", "rose-tinted glasses" etc to convey cynicism/critical thinking/realism but not "pessimistic"
0
Word for a parasite except that it has no effect on the host