Place at home where deities are kept

Normally, we would call it temple, mosque or church if it were outside. I am looking for a term for "a place at home where we keep the idols of gods and worship them". What would that be called? Is there any specific word for that? In Hindi we call it something which loosely translates to "prayer room" (Puja Ghar)

I would say "shrine" would be a good word. Even better would be the phrase "personal shrine".

any structure or place consecrated or devoted to some saint, holy person, or deity, as an altar, chapel, church, or temple.

A "personal shrine" carries the implication it is used by just one person. "Household shrine" may be a better fit.

You could use the Latin word lararium (pl. lararia), which will be familiar to some readers. But now that there are probably a lot more speakers of Hindi than Latin in western English-speaking countries, why not just use the Hindi word?

The term you are looking for is very specific to Hindu culture, in a western catholic context that would be referred to as a home altar: 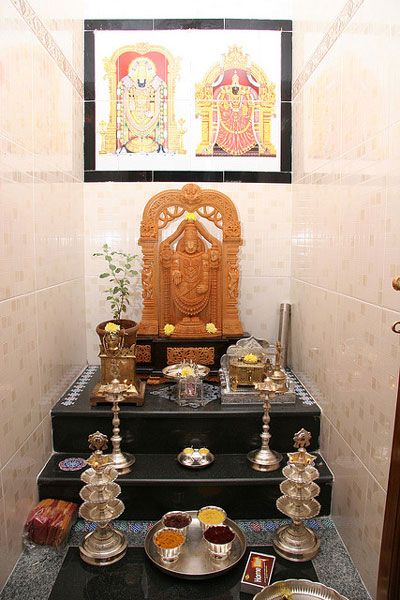 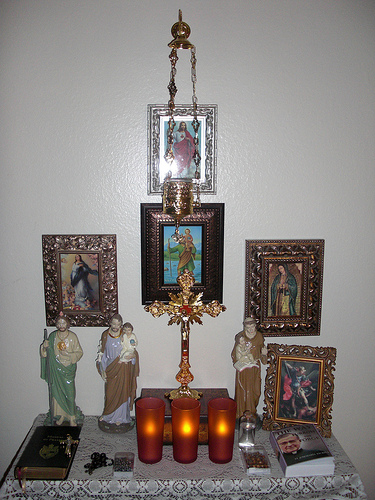 In a large (like mansion-sized) house, there are chapels, but "gods" are not kept there, unless you consider statues of Jesus on the cross as a god.

A smaller alcove, not a room, with its contents would be a shrine. The actual entablature would be an altar.

In modern Western culture there is no specific word for a designated room for gods, but the ancient Romans had a place where they kept the household gods, the lares, which was called the lararium. The lararium was a closet or shelf where the lares were placed.

If you have some extra space in your home, here’s another, more spiritual way to make use of it. Convert it into a prayer nook, a space where you can talk with God without being disturbed or distracted by the outside world.

... A prayer nook doesn’t have to be in a big space. But it should be a dedicated space – one with no other function than to bring you closer to the Creator. If you’re living in tight quarters, consider these possibilities: a walk-in closet (or half of one), an under-the-staircase space or a recessed area formed by a dormer. Basements and attics may also yield some unused areas.

Buddhist Thais have a similar room in their house devoted to the worship of Buddha images. I have heard the English terms, "image/idol room", "prayer room" and "meditation room" in this context.

The term "family alter" also comes to mind, although from the context of 19th century Protestant family worships.

Icon corner or a Red corner is a place where you keep religious symbols in eastern cultures.

In Ancient Rome they had a lararium. (Note that those deities actually resided there, contrary to Kevin's comment.)

If modern words don't suffice, a loanword from Latin is often acceptable in English.

A reliquary (also referred to as a shrine or by the French term châsse) is a container for relics. These may be the purported or actual physical remains of saints, such as bones, pieces of clothing, or some object associated with saints or other religious figures...
...Relics have long been important to Buddhists, Christians, Hindus and many other religions. In these cultures, reliquaries are often presented in shrines, churches, or temples to which the faithful make pilgrimages in order to gain blessings.

The actual word where the idols of Gods are placed inside a temple (at home or in the temple itselves)is called "Sanctum Sanctorum", or as we call it in Hindi as "Aasna of the Gods". This word is drawn from the Jewish language and absorbed in English.

0
What's the name for a place where powder is kept?
2
Generalized term for correspondence chess
2
Light bulb on a bare/poorly-executed/dangerous wire
6
What's a good word for a person, or a state, when a person is constantly waiting for life to get good, but does nothing to actually make it happen
0
Word for a place or building where martyres are kept or buried?
0
Looking for a word for an "outhouse" inside the house