Origin of the term 'smartphone'

According to the The History of the Smartphone:

Being a relatively recent expression I wonder if it is possible to accurately trace who first used it and when.

Edit: some comments suggest it is 'hard' to trace its earliest usage/usages because its origin is from a common adjective (smart) which was very likely used referring to phones before the term became common as smartphone. Though I agree with this, "smartphone" is a neologism which came into being, as many others, at one point in time and most likely some tech/telecom company used it first as a single word.

Tracing the Origin of the Term "Smartphone"

TL;DR: The OP was hoping to discover who was the brainchild behind the catchy name, smartphone; but as I hope to illustrate, smart phone with all its variants, had been around long before Ericsson's “Penelope” model in 1997. In fact the term smart has been often used in the world of advertising precisely because it encapsulates so many meanings in one short word: intelligence, style, elegance, class and modernity. Any possible contenders such as: PDA (Personal Digital Assistant); computer-phone; computer-functional phone, or multiuse-phone for this new generation of miniature computer phones were simply crushed by ‘smartphone’.

For more than half a century, the office telephone was a desktop fixture as immutably prosaic as an ashtray. There was no need to think much about it: it was the phone company's property, and its function was clearly defined, its costs predictable, its longevity assured. Today, however, the plain old business phone is taking its place among the vanishing familiar certainties whose loss makes life at once more worrisome and exhilarating. No longer simply a leased appliance, the office phone is part of today's upheaval in communications "The shrinking standard of living"
Bureau of Management Consulting, Supply and Services Canada., 1980

Protel,® Inc. of Lakeland, Florida began as a pay telephone manufacturer gaining a solid reputation for leadership when we invented line-powered, smart payphones. While it has been almost two decades since our first patent, we have continued to expand our expertise in Telemetry and Management Systems to a variety of industries…

The Smartphone III comes with an operator intercept interrupt module that detects non-connection. Data capability and rate tables are programmed in by the distributors. The rate table setting is flexible and IBM PC compatible.

A refined version of the product was marketed to consumers in 1994 by BellSouth under the name Simon Personal Communicator. The Simon was the first cellular device that can be properly referred to as a "smartphone", although it was not called that in 1994 source Wikipedia, Smartphone: forerunner

This is just one example of the really cool, new, mobile computer gadgets that are out there now. Today we'll show you the newest, and the neatest, portable computing devices on this edition of the Computer Chronicles.
Video clip

Interestingly the presenter never used the term smart but he did say neatest which is a very close synonym.

The Simon Personal Communicator was the first cellular phone to include telephone and PDA (Personal Digital Assistant) features in one device but it was not until 1997, when Ericsson called its GS 88 “Penelope” a “Smart Phone” that the term was used to describe a phone with functions and features similar to a computer. 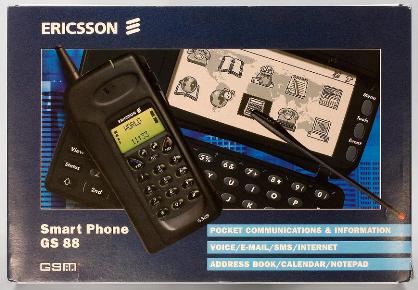 Smart is a fairly common term in computing, to refer to a system with processing power. reference.com, definition 17 says: "(of a machine, system, etc.) equipped with electronic control mechanisms and capable of automated and seemingly intelligent operation" givin examples smart copiers and smart weapons. The term smart bombs for laser-guided air-dropped munitions has been around for some decades, for example.

Similarly smart terminal is a phrase with a long history in computing, generally denoting some data-handling ability beyond the dumb terminal which could be just a screen and keyboard on the end of a wire to a mainframe.

The smartphone as we know it now started with the iPhone, i.e. a phone made by a computer company. Even the previous generation (which might be called feature phones these days) existed within an environment (telecoms firms, manufacturers) that had a history of smart products in contrast to those with fewer features.

Thus smartphone is just an example of smart x where x is a piece of hardware; it just happens to be the best-known example (not the only, smart car was mentioned in the comments). As phone is a single syllable and we already have telephone and (in the US at least) cellphone, smartphone is logically a single word rather than a phrase.

A common tool for word history is google ngrams, but here it's of little help, because (i) its corpus stops in 2008, and (ii) it only indexes books.

A few points are of interest though:

The OED traces back to 1980 but the word smart is in single quotes. I couldn't find an earlier usage in Google Books.

The word smart for this sense is from 1948 according to the OED:

The earlier ENIAC was pretty smart but the UNIVAC is even smarter.

"Space wars - the first six hours of WWIII" is a book detailing a scenario where the United States satellites are targeted by unknown actors as the opening to a wider conflict. It is a tech heavy book and throughout it the characters use devices described as mobile phones with internet connected computers in them. It is interesting to note that at no point are they called "smart phones".

It is quite jarring and a little clunky to read them being called 'communicators' or the now archaic 'PDA'.

I think what this illustrates is that there is a big difference between when a phrase or word is coined and when it becomes common in use.

The word smartphone may have dipped in use when the iphone was launched in June 2007 but it certainly wasn't in common use before then as the author seems to have been at a loss as to what to call these things that were just starting to make their presence felt in our lives.

The book was published in April 2007.

6
Who first used the term "bit rot"?
2
On the origin and usage of 'mainstream'!
8
What was the original usage of the term "haptic"?
8
From the horse jockey to the disc jockey
15
"Digital computer" in the 1940s
7
Where does "blah" meaning "idle talk" come from?
5
Does "mouse" in the computer sense come from nautical slang?
9
Usage, meaning and popularity of the term "nerd"
3
What made “gusto” popular?
12
Where did the term “tower shield” come from?