Word for the typical posture of a smartphone user

A sentence taken from a student's piece of homework.

I often happen to watch youngsters leaning simultaneously on their smartphones while they are in groups. 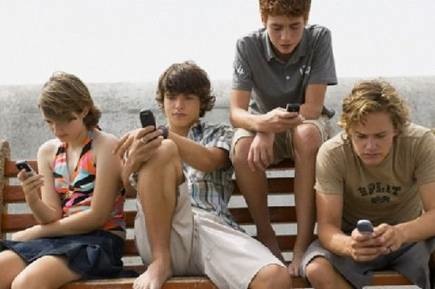 You can understand what he's saying can't you? It's also grammatical. But you don't ‘physically’ lean on a smartphone, do you?

It's a common enough phenomenon in today's society; we have all seen groups of teenagers huddled over their smartphones. But what about leaning? What preposition do I use with lean that fits with the meaning my student wanted to convey?

I suggested huddled over but is there a better or a more appropriate verb I could have suggested?

The actual physical posture, without imputing any behavior or moral characteristic to it, is "hunched". It often takes the preposition "over".

There are a bunch of kids hunched over their smartphones; I don't know if they're texting or playing a game.

While we're visiting your grandparents, I don't want to see you hunch over your phone.

Why is Jim all hunched over? I don't know - did he hurt his back?

to assume a bent or crooked posture

If you bend your head or if it bends, you move it forward and downward without moving your body downward: The three of them sat there with their heads bent over their books.

I often happen to watch youngsters bent simultaneously over their smartphones while they are in groups.

Seinfeld called it "the blackberry head-down", which could be updated to "the smartphone head-down". Although he was referring specifically to the discourteous phenomenon of someone gravitating toward their phone mid-conversation, it could still apply to someone engaged in said posture. Here's a suggestion- just call it "the phone zone". i.e. "I just walked by a bunch of teens unnoticed because they were all in the phone zone." or "He didn't really pay attention to the lecture. He was in the phone zone." "A great example of the increased isolationism in modern society is when you see a group of teens hanging out together, but they are all in the phone zone."

I would suggest the word "cradle" as in, "I often happen to watch youngsters cradling their smartphones while they are in groups."

The literal definition of "to hold or support protectively" works plus it implies the importance of the phone to the typical teen.

Why can't we simply use 'buried themselves in their smartphones' if you wan't to convey the lack of eye contact between the young people, as you've mentioned.
http://www.macmillandictionary.com/dictionary/british/bury

Sometimes people stand up straight and look at their phones, so stalking would work as well.

Not the answer you're looking for? Browse other questions tagged single-word-requests word-choice phrase-requests or ask your own question.

8
Not “schadenfreude”, but related?
13
What is the English term for those who cannot part with their smartphones anywhere or at any time?
3
Word that includes laptop, tablet, smartphone etc
0
A Word for Voucher User
9
Perception versus Reality
0
Word to name a group that sits between Junior and Senior
2
Word/Phrase for a laughter-like reaction
1
A word or multiple words to describe someone asking a question but not meaning to where the subjects know it from the start
4
Looking for a descriptive word(s)) to describe digest/summation/pocket culture