What is the origin of the idiom "with all the bells and whistles"?

No major dictionary website carries the origin of this proverb. Some blogs speculate that it comes from a locomotive usage. In the days of the steam engine, engines would be equipped with bells and whistles to let people know of their presence. Over time, this got distorted to its current meaning, of non-essential add-ons to products to entice customers.

I can imagine that this has a more agrarian origin. In cattle fairs, where cattle are bought and sold, cattle are often decorated with festoons and beads and so on, to entice potential customers and hopefully increase value as well. Does anyone have anything to substantiate this, or a better explanation of its origin?

Edit: the n-grams show that it was used first in British English in 1847, and in American English as late as 1865. This would suggest a British origin, rather than the commonly accepted American one.

The Collins dictionary has this to say about the etymology of this phrase:

Word origin: from the bells and whistles which used to decorate fairground organs

Fairground organs could be very colorful, so it's easy to see how they would serve as a basis for the idiom: 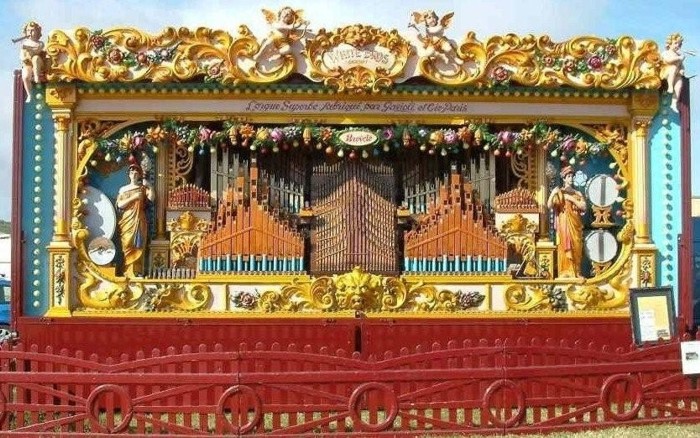 Not sure about the cattle, but you could be on the right lines with country fairs. The Oxford Dictionary of Word Origins (by Julia Cresswell), under the entry on 'Bell', states (p.44):

which makes more sense to me than putting a whistle on a cow. The Wikipedia entry for such a calliope mentions

The whistles of a calliope are tuned to a chromatic scale, although this process is difficult and must be repeated often to maintain quality sound. Since the pitch of each note is largely affected by the temperature of the steam, accurate tuning is nearly impossible; however, the off-pitch notes (particularly in the upper register) have become somewhat of a trademark of the steam calliope. A calliope may have anywhere from 25 to 67 whistles, but 32 is traditional for a steam calliope.

And the entry for fairground organ says:

The ornate case façades frequently had different instruments such as a Glockenspiel or Drums that provide visual entertainment as they played. There were often ornate human figures such as a conductor whose arm moved in time to the music or women whose arms would strike bells. The mechanics to accomplish this motion were quite intricate and provided a pleasant visual experience in addition to the music.

So while I'm reluctant to claim this as the source, these early steam-powered entertainments were certainly fitted with lots of Bs and Ws, for delightful if arguably non-essential reasons.

Here is an attestation from 1858 of the phrase "bells and whistles" in connection with the idea of fancy conveniences that mansions can be fitted out with.

I'm not sure whether this counts as a definitive source, but I recently heard a story on the radio about movie theater organs, once used for live performances during silent films, which claimed that the saying derives from these. These organs had many additional instruments attached to them to allow a range of sounds to be produced, including bells and whistles.

There are a lot of sayings that we use that come from an organ. I mean, "all the bells and whistles." That's because of these things. The phrase, "pulling out all the stops," that's from church and concert organs.

Wikipedia's article on the theatre organ also makes reference to these additional components of these organs.

Real musical instruments, not previously associated with the pipe organ, were installed in the pipe chambers to be pneumatically operated at will by the organist. Such instruments as piano, drums, cymbals, xylophone, marimba, orchestra bells, chimes, castanets, woodblock, and even tuned sleigh bells could be played from the organ keyboards. Sound effects such as train and boat whistles, car horns, sirens, bird whistles, and an imitation of ocean surf could be used to great effect at appropriate times during a silent film.

According to a 1974 US Congress report, "The Congress and Information Technology":

Within the computer industry, the phrase "all the bells and whistles" alludes to a computer with a panoply of offerings — some necessary, some merely nice to have — which gives the user greater latitude in using his machine.

The idiomatic use of the phrase "all the bells and whistles" grew out of jargon within the computer industry.

By late 1950s "bells and whistles" was being used as jargon in the computer industry.

Many have a variety of attachments and peripheral gear nicknamed the "bells and whistles."

They acknowledge the lack of input/output routines, sort, and other “bells and whistles,” but state these fall under the category of environment description and will be taken care of by the manufacturers.

The 650 with tapes, according to Combustion Engineering's Assistant Controller, Herbert Seidensticker, "has all the basic features of a large-scale computer -- it may not have all the bells and whistles, or the speed, ...

1956, Proceedings of the Automation Conference

The oldest use in the modern sense that I have found actually is in reference to an infrared pyrometer (thermometer):

What we will need for large-scale industrial use is a stripped-down model without all the 'bells and whistles'.

This was published in August 1955 in the journal Industrial and Engineering Chemistry, volume 47, issue 8, pages 7A, 9A and also in Science Digest, volume 38, page 360.

In the early 20 century, battery operated electric clocks were developed known as master clocks. A single master clock in a school or factory could run dozens of slave clocks through the building. The clocks also rang bells for lunch or break times and blew whistles for end of day. The bells and whistles where extra options that not every system had. If you got a very fancy system, you got one with "all the bells and whistles" 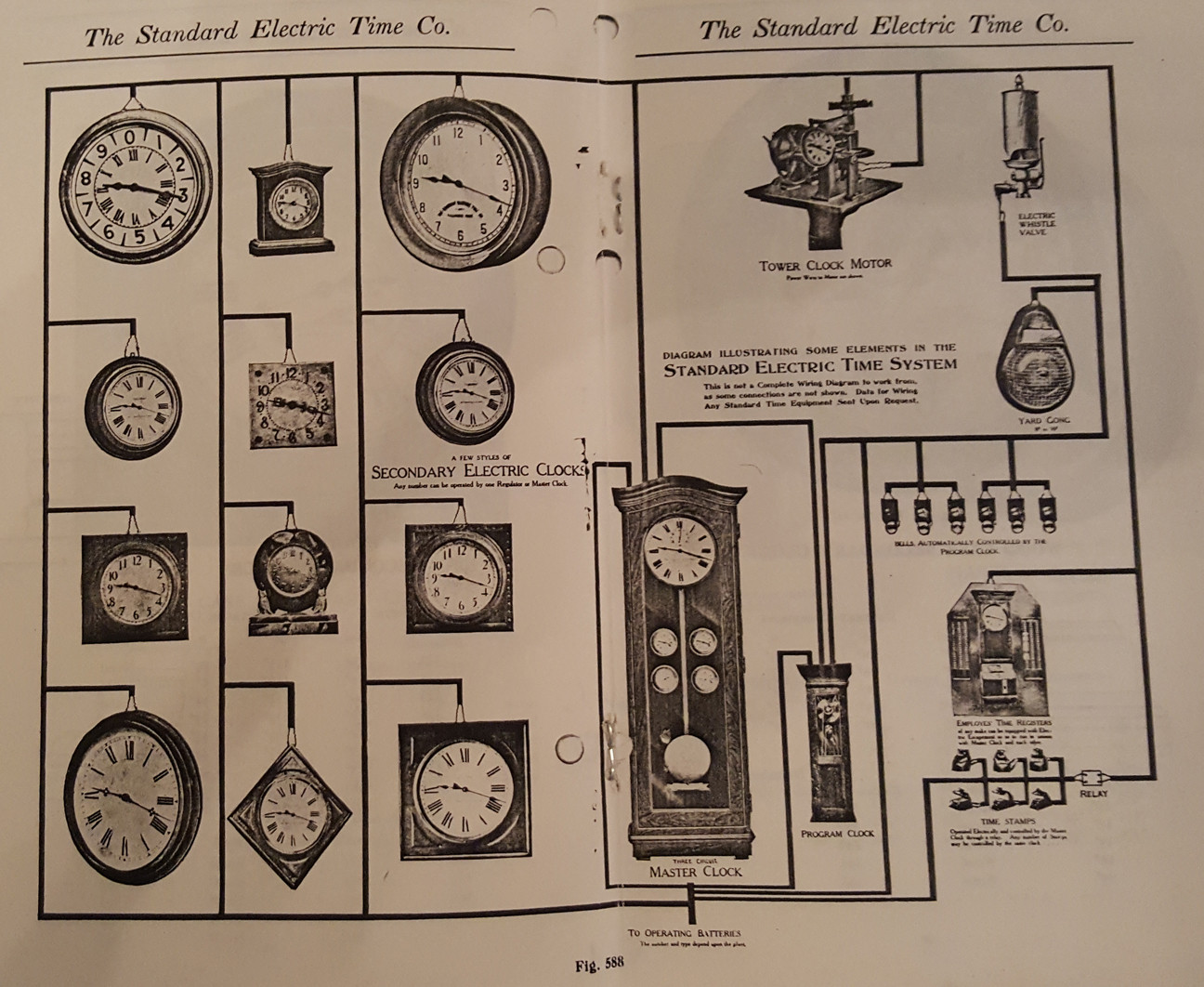 Two things are crucial to sorting this out, first the meaning of the expression and second, its idiomatic as opposed to everyday usage. The Oxford English dictionary give the following:

bells and whistles n. [as on a fairground organ] colloq. attractive additional features or trimmings, esp. in Computing.

1977 Byte July 122/2 This simple circuit..even has a few outputs that can be used to provide user defined functions, such as enabling external devices or turning on bells and whistles. 1983 Austral. Personal Computer Dec. 82/3, 1-2-3 has a full complement of the usual bells and whistles... Column widths can be varied, cells protected, screen split in two, models split, merged and printed. 1984 Sunday Times 26 Aug. 49/1 There are more than 600 microsystems on the market so it is hardly surprising that the manufacturers have taken to hanging a few bells and whistles on to their machines to get them noticed.

Rather than a fairground organ, I would think a theater organ. Thousands were made between the late nineteenth century and the onset of the talkies, and one of their features was the so-called toy counter, which featured bells, whistles, and other added on, non-essential but valued sounds. This actually fits with the definition of the idiom.

The n-grams need to be drilled down into to tell this story. An n-gram search on Whistles and bells as well as bells and whistles can be used to sort out the idiomatic from the everyday. The geeks don't get the original though. I found a usage from the 1950s by a tractor-trailer driver, indicating that the expression was popular orally long before it became popular in print.

It can also be found in the seventies in audio equipment marketing, military, and business use besides the home computer users and hackers. A search for bells and whistles using google's custom dates set for the 1970s (leaving out unix default date of 1/1/1970 gets rid of most but not all the false positives) will turn up a bunch of idiomatic uses in various fields, as will drilling down to the actual texts in the n-grams. I'd put in the link but I only get two!

I think the theater org makes the most sense, but I don't have hard proof. The data do point toward a more complex answer than "hackers" though. Maybe if I pulled out all the stops...(another theater organ idiom).

My answer to my own question:

I suddenly felt like combing the google books archive for this phrase, trying to see how this phrase has evolved. I don't know how comprehensive the archive the good folks at Google have, but this is what the archives show:

The first usage of the idiom as we know it currently is in an advertisement in the Computerworld magazine, issue of 7th Mar 1973. After this, it shows a lot in the same magazine's articles.

Bells and whistles show up in a lot of regulation handbooks for locomotives and boats right upto the 70s. In 1966, the first suggestion of the phrase meaning something more than the regulatory usage.

The bells started as a strictly utilitarian means of signaling to rouse roustabouts at a landing and to warn passengers and guests of a departure. Gradually they grew into bigger, shinier, and more mellow status symbols. Some weighed upto 1,500 pounds and had quarts of silver dollars melted in their metal.

This is from the book "River Boats of America", by Frank R Donovan.

In my opinion, the original usage dates back to the 15th century when pilgrims were often criticised for making a nuisance of themselves with their bells and whistles.