What does "Give a penny to Belisarius" mean?

There is the phrase Date Obolum Bellisario which roughly translates to "Give a penny to Belisarius". This is followed by an explanation of Belisarius:

Belisarius, a famous Roman general during the reign of Justinian, achieved notable victories over the barbarians, but in his old age incurred the envy of the emperor and for a time was imprisoned and reduced to penury.

But I've never heard the expression "Give a penny to X" before and don't understand it in this context. The context of the phrase would be around 1766.

Belisarius supposedly was condemned to life as a blind beggar (i.e., penury) by order of Justinian to have Belisarius' eyes put out. Thus, the phrase Give a penny to Belisarius was what this once great man was reduced to asking anyone who came nearby in an effort to gain sympathetic support. It would be similar to the piteous cry for a handout Alms for the poor. However, Belisarius' fate was more relevant to injustice than poverty, though both were certainly the case.

As to use of this phrase in modern times, it is so archaic that it might not be fully comprehended out of context. Of course, we use phrases that some know little if anything of the historical origin, and yet get the intention to apply a phrase of this type to unrelated matters (e.g., Remember the Maine, Don't Tread on Me, Live Free or Die, Attica).

"Give Poor Belisarius a Penny." 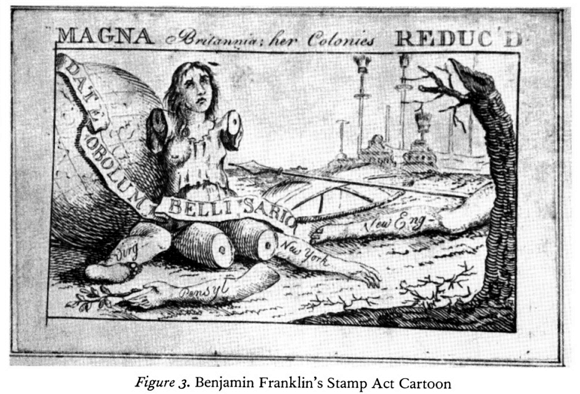 The above (c. 1766) is of (symbolic) England with the colonies cut off. It was in response to the Stamp Act (seen as unfair taxation.)

The ordaining of laws in favor of one part of the nation, to the prejudice and oppression of another, is certainly the most erroneous and mistaken policy. An equal dispensation of protection, rights, privileges, and advantages, is what every part is entitled to, and ought to enjoy; it being a matter of no moment to the state, whether a subject grows rich and flourishing on the Thames or the Ohio, in Edinburgh or Dublin. These measures never fail to create great and violent jealousies and animosities between the people favored and the people oppressed: whence a total separation of affections, interests, political obligations, and all manner of connections, necessarily ensue, by which the whole state is weakened, and perhaps ruined for ever! - Benjamin Franklin, Emblematical Representations

In other words, Great Britain (seen as rich) was taxing the colonies (considered by the colonists as much poorer) and the depiction was stirring for revolution.

It was tantamount to saying "Give poor Great Britain a penny", where GB is pictured in a much reduced state (off her globe, unable to weild her sheild, lance or olive branch, in pieces with a lance pointed at her breast) like Bellisarius was in the end.

Is it common? Not at all. But it would be familiar to those studying American History and the founding fathers.