Hit someone with both *BARRELS"

We hear a lot of idioms and phrases involving BARREL.

The Link in "thefreedictionary.com" shows a lot of idioms using "barrel" as a noun and a verb.

"Barrel" is defined in Merriam-Webster as a noun:

a round usually wooden container with curved sides and flat ends.

the amount of something in a barrel.

the part of a gun that the bullets go through when the gun is fired.

One thing very interesting to me is when you use "hit someone with both barrels", it is not very difficult to understand what it means and that the third definition is used. But, why they use "both" and "barrel" together. Why just two? Isn't it the more, the better and stronger?

Would it sound weird if someone says, "Hit someone with three/four or even five barrels"?

The reference is to a "double-barrel shotgun". Though there are firearms with more barrels, they're rare. 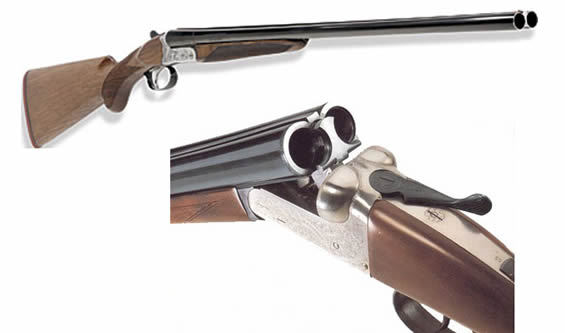 Further, the double-barrel shotgun often has two triggers, one positioned slightly behind the other, such that if one pulls hard enough both barrels will fire in quick succession, producing a devastating blast.

"Both barrels" -- because it's based on an idea of a gun that has two barrels. Like a shotgun (an often double-barreled smoothbore shoulder weapon).

with as much energy as possible

Etymology: based on the idea of shooting with a gun that has two barrels (tubes from which bullets are shot)

"Hit someone with three/four/five barrels" is certainly not an idiom. The idiom uses the word "both".

0
hit the road (meaning in context)
0
when and how I can use plural form of a noun.
3
What's the meaning of "hit somebody like a bucket of cold water"?
51
Why is "You’ve brought a knife to a gun fight" considered to be a mixed metaphor?
0
Hook someone up with vs fix someone up with something
1
Hit the spot vs hit the mark
0
What does "hit the decks running" mean?
2
Why does the word "shop" behave like a non-count noun in phrases like "set up shop"?