& What is the story behind the Ampersand? [duplicate]

Can someone explain the origin of this symbol, and deconstruct the name "ampersand"? I vaguely recall my mother's saying she learned her alphabet (early 1920s) with this symbol being the "27th letter".

The origin of the name is the modified phrase and per se and (meaning the "&" character by itself is "and").

The symbol comes from the Latin word et (meaning and), according to this link.

It's simply an abbreviation developed by scribes for the Latin word et.

Writing very common words (especially in medieval manuscripts where sentences were commonly connected by and) was tedious, and eventually shortcuts (apostrophes for missing letters, the ampersand, etc.) developed.

Can you see the et in the following? 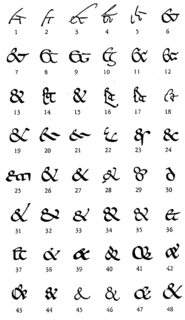 The first is from graffiti in Pompeii (so first c. AD). The seventh is from the Book of Kells (7 c.), and #13 is an 8th century Merovigian ampersand, already recognisable as the modern ampersand form.

The first recorded ampersand—a rudimentary ligature of the letters “E” and “T” from the Latin word et, meaning “and”— was scratched onto a Pompeian wall by an anonymous graffiti artist around the first century A.D. ... In time, the ampersand became a ubiquitous symbol: by the nineteenth century it was taught to schoolchildren as a twenty-seventh letter of the alphabet. Before that, however, it spent an entire millennium in competition with a rival mark. The “Tironian et” (⁊), had the twofold advantage of a head start and an impeccable pedigree.

Not the answer you're looking for? Browse other questions tagged ampersand or ask your own question.

5
Is an ampersand formal?
21
Is it ever appropriate to use a space before and after an ampersand?
2
Is there any basis or history for calling @ an ampersand?
0
How does the ampersand in most fonts resemble “et”