What's the origin of "strike a chord with..."

People use the phrase "x strikes a chord with me" to address enthusiasm or personal movement.

I know there is another question that addresses what this idiomatic phrase means, but I'm very curious as to where this came from and when? I've searched a number of English dictionaries in hopes that a definition of the idiom or simply the word chord would be affixed with the origin; I started with the Cambridge English dictionary and proceeded from there.

I also tried many fruitless Google queries. If someone could point me towards a reliable resource, I'd have no problem doing further research.

I know music is a very emotional endeavor, so I could see the connection there--considering chords are a significant component of music--but this is purely a personal inference.

Does anyone know this idiom's origin?

Literal use of 'strike a chord'

In English, literal use of "strike a chord" goes back at least to the first half of the eighteenth century. From William Holder, A Treatise of the Natural Grounds, and Principles of Harmony (1731):

To this purpose [demonstrating the unity of motions in harmoniously sounded musical strings], strike a Chord of a sounding Instrument, and at the same Time, another Chord supposed to be in all respects Equal, i.e. in Length, Matter, Thickness, and Tension. Here then, both the Strings give their Sound ; each Sound is a certain Tune ; each Tune is made by a certain Measure of Vibrations ; the same Vibrations are impressed upon, and carried every way along the Medium, in Undulations of the same Measure with them, until the Sounds arrive at the Ear.

Metaphorical use of 'strike a chord'

Metaphorical use of "strike a chord" to mean "evoke an emotional response" goes back to the early 1800s.

"No, I will not," said I, laying down several letters brought me by the post this morning—"No, I will not read one of them for a month to come : complain! and complain! forever! there is no end of it! I am now in perfect good humour with all the world, and I will not, by peeping into these letters, run the risk of striking a chord, which not being in unison with my present feelings, might put the whole machine out of tune."

From B.T., "On the Bodily Agitations which have taken Place in America," in The Christian Observer (September 1804):

Now, Sir, what is the state of a congregation where strange agitations have appeared? Expectation is on the tiptoe. Their imaginations are in restless, perturbed state, watching for some communication from the invisible world. Some fall down or cry out. Others wonder when it will be their turn to do the same, and generally wish the time to arrive. Every successive instance of agitation in the congregation strikes a chord in their heart, which works them up to a frame of mind nearer and nearer to the electric shock, the effects of which they see and hear around them. Can we wonder that this shock should at length reach them ; that they should experience real sobs, and agitation, and faintings, which so completely could their faculties as to make them an easy prey to every delusion ; ...

From Valverdi, "The Reflector," in The Literary Magazine, and American Register (August 1807):

Nor has this tendency [toward superstitious fear of midnight] been unfelt in any age, or overlooked by any observer ; all true poets, whether sacred or profane, have raised their boldest structures upon this foundation ; it has furnished them with their most sublime conceptions, and terrific descriptions. They well knew they struck a chord whose vibrations are universally extensive.

From a letter dated June 14, 1808, in Richard Fenton, A Tour in Quest of Genealogy through Several Parts of Wales, Somersetshire, and Wiltshire, in a Series of Letters to a Friend in Dublin (1811):

"... I have lived much in the world, and long enough to make me sick of it ; have suffered from the instability of fortune and the delusion of friendship ; but, profiting by my follies and my inexperience, am got into port before I was fairly wrecked, having had the resolution to retire before I had lost my relish for the enjoyment of happiness, and happiness I had to enjoy till the grave swallowed it up."The tear swelled in his eye; he had struck a chord that was too moving, and instantly changed the strain, saying, “ How thoughtless I am, gentlemen ! I should have asked you if you would have taken any thing before your dinner; I have mead of such strength as to merit the name of cordial, and in cases of extreme fatigue or lowness of spirits I have known it operate most wonderfully as a restorative ; ..."

From Letter VIII of "Letters on France and England," in The American Review of History and Politics (April 1812):

After having dwelt so long on the afflictions of the Parisians, I cannot do better, for the exhilaration of your spirits, as well as of my own, than to pass in review, some few of their favourite amusements. Even here I strike a chord sounding at intervals a harsh, and melancholy note: for I am compelled to believe,—and must write accordingly,—that these are, in themselves, but an indifferent solace, notwithstanding the passionate avidity with which they are sought.

HORACE. No, Sir .. my thoughts had taken another, but very natural turn. I never think of Matrimony, but the wretched situation of your lonely ward is before my eyes. Does she still continue in her harmless distemper?

TEMPLE. There, you have struck a chord, that vibrates to the inmost core of my bosom. Alas! she eats and sleeps of late, less than ever; and whatever she utters, is connected with the name of my poor Edgar.

An interesting crossover instance from musical chords to metaphorical chords of feeling appears in a facetious footnote to The Rovers; or, The Double Arrangement, act 1, in The Ordeal: A Critical Journal of Politicks and Literature (May 13, 1809):

The song of Rogero is a fancy of the poet's, as is the full accompaniment of the violins from the orchestra. So in the Melo-Drama, the characters are obliged to wait for the musick to strike a chord in unison with the sensation to be produced, before the passion can be exhibited. And the actor is frequently obliged to give a signal to the leader of the band, by a wink, a motion, a stamp of the foot, that he may begin ; as 'now, sir, I am to be mad, let your instruments express distraction ; now disappointed, let your violin indicate disappointment ; now I wish to wash my hands, let your musick be expressive of soap and water,' &c.

'Strike a chord' and 'heart-strings': no connection?

Although you might suppose that striking a chord in the heart (as mentioned in the 1804 reference above) might entail a connection between the "strike a chord" metaphor and "heart-strings," a term that (according to Merriam-Webster's Eleventh Collegiate Dictionary (2003) goes back to the fifteenth century:

heartstring n (15c) 1 obs : a nerve once believed to sustain the heart 2 : the deepest emotions or affections {pulled at his heartstrings}

By Samuel Johnson's time, heart-string seems to have acquired a tougher, more sinewy identification. From Samuel Johnson, A Dictionary of the English Language (1756):

HEART-STRING. s. {string and heart.} The tendons or nerves supposed to brace and sustain the heart. Spenser. Taylor.

The snapping of these strings may have been the original basis for the idea of "breaking a heart. Certainly, some early instances of heart-strings do make a connection between them and musical strings. For example, in William Shakespeare, Richard III:

King Richard. Harp not on that string, madam; that is past.

Queen Elizabeth. Harp on it still shall I, till heart-strings break.

And yet I don't find any explicit connection between "heart-strings" and "strike a chord" until L.B. Flanders, "Lines (Sorrow's Music Strains)" in Heart Histories, Spirit Longings, Etc. (1877):

Then, poet, would you strike a chord

Whose notes should penetrate the soul,

Play on the quiv'ring heart-strings where

The New York Chamber of Commerce, Monthly Bulletin (1960) embraces both expressions in the name of capitalism:

...complex and democratic participation. These are the heart strings upon which business can play to strike a chord to help mankind to reach upward to the North Star of hope within Capitalism.

'Strike a chord' in the literal sense of produce a harmonious musical sound on a stringed instrument goes back to at least. Metaphorical use of the phrase to convey the idea "evoke an emotional response" goes back to at lest 1803 and is based ion that earlier musical sense of the phrase. I could not find any early connection between "strike a chord" an "heart-string"—the latter being not metaphor but a physiological description of one component of the heart's structure.

In a piano (and other instruments with strings) when a specific note is played, the string vibrates at a specific rate. This vibration can cause other strings to vibrate as well, and the strings which are most likely to vibrate are those that have common harmonics with the original note. You can also do this by singing at a piano. This is called sympathetic vibration or sympathetic resonance.

By analogy, when a work which conveys some sort of emotion or feeling triggers your own emotions, recalling past emotions, it's said to strike a chord with you. The word resonate can also have the same meaning, as in "That poem by Taniguchi Buson really resonates with me/strikes a chord with me."

To begin to answer to the when question, I found a mention to this expression in a French translation of English texts dated 1797: 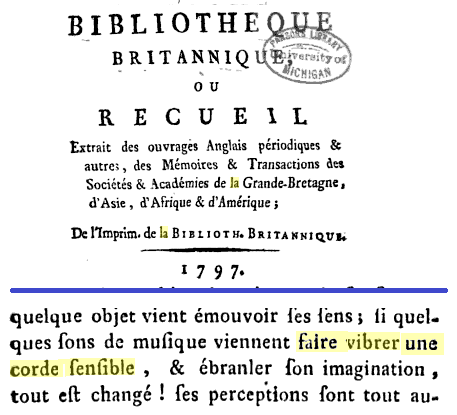 "Strike the chord" originates from the 1800's from medieval times in England with the monarchy and court entertainment in high profile.

Strike me down swiftly but is it possible that the phrase came from a mishearing of 'struck accord'? A quick googley eyed look reckons the French 'acorde' meaning 'agreement' crossed over into English around 12c. People might have been first 'striking chords' in the diplomatical sense around then?

13
What Does Strike a Chord Mean?