single word for extensive computer user, not geek nor nerd

I am looking for a word describing person who uses computer a lot, it might be a programmer, a gamer but also an accountant or any other person who works in the office and spends most of the day in front of computer screen.

Geek or nerd doesn't fit for me, because it's hard to say that 50 years old accountant who happens to spend 8 hrs/day using a computer could be called a nerd, right?

It might be informal, I need it for a game/app title.

Power User is a good one. It signifies someone who uses the computer a lot and as such knows his or her way around quite well.

Nearly all desk jobs these days involve computers, so you can use the old fashioned term for someone with a desk job, desk jockey.Merriam-Webster

You can go even more old-school, and refer to a really old computer user as a keypuncher.Wiktionary 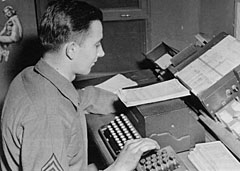 Perhaps Technophile would fit your purpose.

: someone who likes and enjoys technology and modern machines (such as computers)

: an enthusiast of technology

Maybe keyboard serf. It has a nice hint at a double entendre.

Serf conveys a slavelike condition, and in particular, someone bound to the land.

The suggestion is that office workers are often chained to their machines. It definitely has a pejorative tone (which may or may not suit the OP). The double entendre comes from its homophonetic connection to surfing the net on ones computer.

How about the term, "Pencilpusher" ?
Not specifically for computer-users, but more for suitable for someone like you described as "an accountant or any other person who works in the office and spends most of the day in front of computer screen."

pencil-pusher noun N. Amer. informal
another term for pen-pusher.
No way he was going to let those pencil pushers from accounting pity him.
DERIVED FROM
pen-pusher noun informal
a person with a clerical job involving a lot of tedious and repetitive paperwork.
DERIVATIVES
pen-pushing adjective

Or the term "Hacker" ?
This could be suitable for programmers, code-writers, computer professionals etc.

hacker |ˈhakə| noun informal
1 a person who uses computers to gain unauthorized access to data.
2 an enthusiastic and skilful computer programmer or user.
DERIVED FROM
hack |hak| verb
gain unauthorized access to data in a system or computer:
[ no obj. ]
They hacked into the bank's computer.
[ with obj. ]
Someone hacked his computer from another location.
hack |hak| noun informal
1 an act of computer hacking.
The challenge of the hack itself.
2 a piece of computer code providing a quick or inelegant solution to a particular problem:
This hack doesn't work on machines that have a firewall.
DERIVATIVES
hacking adjective, mass noun
Outlawing hacking has not stopped it.

If you're more concerned with implying the connotation of extended visual contact with computers, monitors, video-screens etc. You could make a reference to having "Square-eyes" ?

Someone who works extensively with calculations (and especially with Excel) is a "number cruncher". A derogatory term for an accountant is a "bean counter". How about a combination of the two - "bean cruncher"? Since it's for a game, to me this seems like it has opportunity for visual/audio effects. If your character is somewhat low level, beans have the double effect of being a lower income food staple.

I would use admin, superuser, technonaught, or my personal name quebit.

It's rather more biased towards programmer than, say, Accountant but what about Code Monkey ?

Not the answer you're looking for? Browse other questions tagged single-word-requests synonyms vocabulary or ask your own question.

2
What do you call someone who is obsessed with video games?
7
Word to describe sending an out of date email after spending a long time composing it
17
Is there a word for someone who is a regular computer user but not an expert?
10
Is there a word/phrase to describe someone who works from home?
72
Derogatory word, describing person (a pupil) who memorizes instead of learning?
2
Word for a computer user without administrative access/privileges
1
Is there a word for a multi-user attempt to grab something?
1
Synonym for "geek" (computer geek) with positive connotation