Etymology of 'curvy' to describe the feminine figure

A term that has been recently spreading also outside the English speaking world, especially, but not only, in the field of fashion is curvy. E.g. Curvy Convention 2015: Models on the Catwalk

The convention will be the ultimate curvy shopping experience…

Curvy is an adjective that means 'full of curves' whose usage dates back to the beginning of the 20th century (1902), according to Etymonline.

Later in the century, apparently around the 60's (see Ngram) the term started to be used to refer to women with the following meaning:

“Curvy” used to describe a slim, well-proportioned, woman; however, today it's a euphemism for women whose waist-hip ratio are more likely to suggest an overweight—or in some extreme cases—a morbidly obese woman.

In recent years, feminists and tabloids have extolled the virtues of being “curvy” and the so-called “real woman” body, arguing that women need to accept their natural contours and feel proud of their bodies, regardless of their size. On the other hand, cynics protest that the term curvy is being abused and is now a catch-all for any woman who is just the F-word (the term fat is considered so derogatory, it's become a taboo word).

I don't think it's possible to pinpoint the date or the reason for a word becoming widespread, but the following excerpt might shed some light.

Any reference to ‘fat’ is negative. Heather Smith (1989) relates how fear and hatred of ‘fat’ pervades ‘Western’ cultures. Fat bodies are defined as ‘disgusting’ or ‘diseased’ and fat women are considered to be, or represented as being, asexual, maternal, or sexually desperate. […] Most women are aware that the ‘ideal’ body is unattainable but feel compelled to attempt transformation and consequently develop a punishing self-hating relationship with their bodies.

The Illusions of "post-feminism": New Women, Old Myths (1995) By Coppock, Haydon, and Richter

The excerpt suggests (in my opinion) that the terms curvy; curvaceous; shapely; voluptuous, and plus-size were selected to boost women's self-esteem and replace the highly-derogatory term fat. In the Ngram below, note how the term curvaceous woman (blue) seems to spiral upwards after the 1990s, whereas curvaceous blonde (red) saw its maximum peak in the early 1990s.

Bear in mind that Ngrams are only an indication, and do not truly represent, in any way, shape or size (ha!) speech trends, and when they do it's several years too late. But, I confess, Ngrams are pretty to look at, so here is another chart comparing the previous terms, (minus plus-size) with the following: voluptuous women (blue line) and shapely women (red line).

When did the semantic change take place? Baxter, and Cosslett, the authors of The Vagenda: A Zero Tolerance Guide to the Media suggest this happened in the early 2000s.

What's even more perplexing about the use of term such as ‘curvy’ is the fact that by the early noughties, body fascism had become so universal that any woman who didn't look like a malnourished size zero was immediately lavished with praise for her ‘body confidence’

So it seems that the term, curvy, is still perceived to be less offensive than any of the traditional euphemisms that were in vogue before the 1980s, e.g. full-figured, big-boned, matronly, and plump.

Before the term curvy came into vogue, women who had narrow waists and whose bust and hip measurements matched were commonly described as having “hourglass figures”

a few years ago gave quite an impetus to the dress-reform movement by persuading a multitude of women of the necessity for more breathing space ; but fashion has now decreed that the hourglass figure is the ideal shape for woman. The National Dressmakers' Association, which recently held a meeting in Chicago, insisted that although a woman may have the shoulders of an athlete, she must have a waist like a wasp, and if she has not such a waist by nature, it is the duty of the dressmaker to produce it by a process akin to that by which the Chinese woman remodels her feet.

Ngrams seem to confirm this, the following expressions in the English corpus: “hourglass figure” (blue line); “she had curves” (green line); and “curvy woman” (red line) are compared across the years 1890—1940.

The origins of curvy

FROM time immemorial it has been an axiom of occidental mariners that both a good woman and a good boat possess plenty of curves in the right places. Like many another old adage it is founded on sound common sense. There are boats that are weird and there are boats that are wonderful, and it is amazingly seldom that one sees a craft that is both weird and wonderful. Conversely, the oriental sailor is a different breed of man. His women are flat and angular, and his boats are monstrous in Western eyes.

Could it be that a ship's curved prow or bow reminded sailors of a woman's curvy body? It's true that the historical pronoun for a ship in English is "she", and many sailing vessels were/are given female names, there is also evidence to suggest that in Old English, ships were gendered. In most Indo-European languages with grammatical gender, the word for "ship" is feminine. As a theory, it's plausible.

Consider also the following proverb, dated 1735, which Benjamin Franklin is credited as being its author.

A ship under sail and a big-bellied Woman
Are the handsomest two things that can be seen common.

In this case, the billowing sail of a ship is compared to a woman's large curved belly carrying an unborn child.

According to Random House Dictionary, the term curvaceous was coined sometime between 1935-1940. The first match for curvaceous blonde I found on Google Books is in 1944, the fact there are no inverted commas surrounding this description implies that readers were already familiar with this form of compliment.

Kim Kimberly, curvaceous blonde, turns in top vocals, and Massey is again spotted. On other numbers needing sax work, Drasnin is spotted with Earl Ziskin. Thruout the set Allen's piano is in there solid.

Kim Kimberly was Armide Whipple's stage name, a singer who began her career singing in the Ben Pollack band but opted to leave show business in 1946. I was curious to see whether she was indeed voluptuous or shapely like Marilyn Monroe, so I searched for her image online. 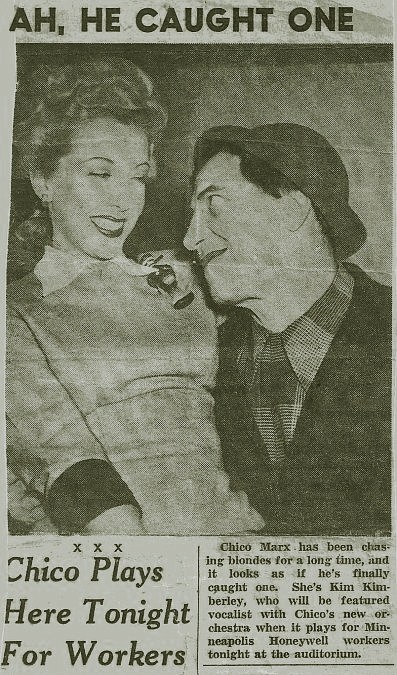 I doubt she would be classed curvaceous or curvy nowadays, she was an attractive blonde vocalist who never made it “big”.

In 1907, 1911, and in 1919 the adjective curvy described women who were more “soft”, and very slim rather than voluptuous and big-busted.

But what a figure she had! Sinuous, supple, rounded, and yet very slight. "She must have the smallest possible bones," Paul said to himself, "because it looks all curvy and soft, and yet she is as slender as a gazelle." She was tall, too, though ...

They are also very fond of sitting down. It is the graceful, curvy woman who has a bad time at her dressmaker's being fitted and fitted and fitted. Personally, I did not own a rag that hadn't cost me hours of weary standing and having pins stuck in me before a mirror. The behabited lady had transformed the glances of her sulky eyes from her boots to me with such a disagreeable ...
The Claw - Page 69 (1911)

Then the bottom dropped out of the world for Ronald; Josie, the awkward little goose he remembered, floated to the front of the stage with something of the gliding snowiness of a swan.

She was tall and slender but very curvy, and not with the curviness of a gawky little girl. Little Josie had been hollow chested and plump stomached. But this Josie was decidedly neither. She was very frail, however—as lithe as a budding willow, but terrifyingly pallid.

"Momma": And Other Unimportant People (1919) By Robert Hughes

In less than a hundred years, curvy has changed from Glyn's curvy and soft, yet slender as a gazelle description in 1907, to Urban Dictionary's stark definition in 2006

Used most commonly in teen magazines as a euphemism for "fat" or "chubby." It works brilliantly as a marketing ploy for these companies, and it keeps from damaging the self-esteem of their overweight American adolescent consumers.

Curvy, in the traditional sense, means having an ample bosom, trim waist, and round butt.

Tyra Banks, Gisele Bundchen, and Scarlett Johansson are truly curvy. They have meat in all the right places!

I found an interesting excerpt form the book, Movers and Shakers: A Chronology of Words that Shaped Our Age

This is for the word "curvaceous" which seems to be the more popular word when referring to the female form. Anyway, here's the excerpt:

The originally American colloquialism is characteristic of an era (1930s to 1950s) when large breasts and wide hips were the thing. 1936 Screen Book Magazine: The curvaceous lady [sc. Mae West] receives from Paramount just as many dollars per week for her scenario work as she receives for her acting.

I also looked up that passage taken from Screen Book Magazine to see if I could find any more info and I came across this article: http://blog.oxforddictionaries.com/2013/08/mae-west/

It certainly seems that Mae West had a big influence on this word, especially with these excerpts:

The early life jackets issued during WWII gave the wearer a puffed-up chest and feminine figure, swiftly earning them the moniker ‘Mae West’.

The Oxford Companion to Ships and the Sea also lists a type of spinnaker (a large three-cornered sail) nicknamed the ‘Mae West’ thanks to ‘the large swelling curve it took up when filled with wind’.

So although the word "curvy" didn't originate during this time, it certainly appears that Mae West had arguably the largest impact on it's increasing popularity.

4
Is the etymology of the word "pandaemonium" in any way related to that of the mythological figure Pandora?
29
Usage of "in figure" vs. "on figure"
2
Usage of "figure" and "figure out"
1
Feminine equivalent of "priapic"
6
Etymology of "Feeding the dragon"
1
"Axel Jump" in jazz and figure skating - question about etymology