What was the original usage of the term "haptic"?

Haptic is a term which is probably becoming more and more popular because of the recent introduction into the mass market of smart devices (phones, watches etc.) with heptic characteristics.

Haptic entered the English language towards the end of the 19th century but its usage has increased only in recent decades (Ngram) in technological contexts.

In what fields was the term originally used (medical, scientific or else)? that is, how come that this "greek" term was borrowed at the turn of the 19th century? Is the term now used also outside tech contexts?

The OED attributes haptic and haptics to translations of a passage in Isaac Barrow's 1683 Lectiones Mathematicae,

The first citation of haptic in the OED is from 1860, in William Whewell's edition, and the first of haptics in an earlier translation published in 1734 by John Kirby: 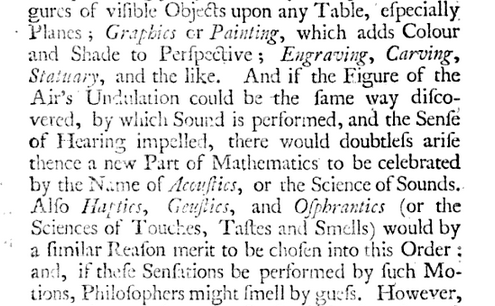 But neither term saw much light of day, and it is more probably more accurate to say that it was introduced from the world of psychology in the late 19th century, the OED's second suggestion. Specifically, it appears the 1892 Über den Hautsinn by Max Dessoir, coined as a parallel to acoustics and optics:

I take the liberty to bring forward the word haptics in proposal, which follows optics and acoustics and is derived from the verb ἁπτομαι.

I imagine Dessoir wanted a term of Greek origin, hence haptics over, say, tactilics. Haptic as an adjective is cited from 1895 onwards, with the first post-Dessoir citation given from Mind 4:407:

In haptic sensations are recognised sensations of simple pleasure, of traction and of impact.

Until the term was applied to touchscreen technology, the psychological term seems to have been the principle use, hence the International Society for Haptics.

The term was invented by Hermann Ebbinghaus around 1892 in conjunction with various papers and writings associated with the Second International Congress of Experimental Psychology in London in August of 1892.

The term is quite Greek word 'απτός' [aptos] meaning 'some or something can be touched. The word 'haptic' [απτικός] means something that can touch. That's for a Greek knowing Greek language well enough. mpapajim