Which is correct: “standing on line” or “standing in line”?

I'm curious to hear from folks in the the Northeast United States (or anyone, really) an explanation of why "standing on line" seems preferable to "standing in line" in the US northeast.

I imagine for many people that their reasons for preference will be that "It just sounds better," just as my reasons for my preference is that "standing on line" sounds too awkward to my ears. That said, I can't even create a linguistic argument for why it might be more "correct."

There is no linguistic reason why either one is correct. This is a normal example of language variation. There are possibly linguistic reasons why such variation in prepositions is fairly common, that being that the meaning of prepositions in many cases is notoriously hard to pin down (in some cases, they have no real meaning, acting instead as plain case markers).

Disclaimer: not exactly a Northeasterners. Like "not at all".

Standing in line is the most common usage, yet "on line" has been used for some time now.

Many commenters have pointed out that this seems to come up a lot in New York (and New England).
I was just watching 2001: A Space Odyssey by Stanely Kubrick and Arthur C. Clarke, released in 1968. I noticed “on line” being used and looked up and it turns out that Kubrick was born in New York.
So take of that what you will. This also is evidence that it is definitely not a new or recent phrase.

The debate raged on democraticunderground.com:

We say 'standing in line', as in 'in a line', eg. 'part of a line'.
'Waiting FOR you' is waiting for another person to arrive or accomplish something.
'Waiting ON you' happens in a restaurant.

I Stand On Line At The Bank... My Car Gets In Line At Jiffy Lube

So unless you have to walk over and stop on a line in order to wait for your turn, ... you probably are waiting, standing in line. 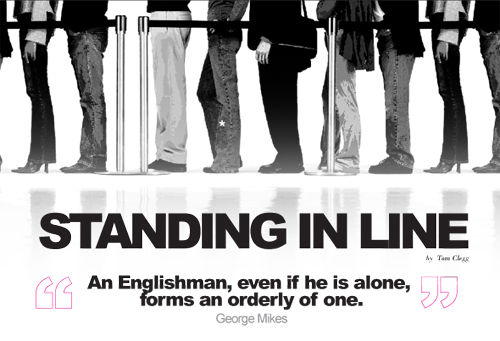 In British English it's the latter. I have never heard of the 'on line' variant used here in the UK.

Regional difference in the way 'in' is pronounced? Perhaps with a certain accent 'in' sounds close enough to 'on' to cause the confusion. They're saying 'in line' but it just sounds more line 'on line'?

Share
Improve this answer
answered Feb 15 '11 at 20:57
user5060user5060
1
Add a comment  |
Highly active question. Earn 10 reputation (not counting the association bonus) in order to answer this question. The reputation requirement helps protect this question from spam and non-answer activity.

Not the answer you're looking for? Browse other questions tagged idioms expressions dialects or ask your own question.

44
What is wrong in “Please don't pluck the flowers” and other phrases used in the Indian subcontinent?
19
“In a call” versus “on a call”
8
Is it correct to say “the 'following' customer”?

13
What pair of words can be combined with “worth every penny” as an idiom?
14
“Make sure to” vs. “Be sure to”: Is the first one correct?
2
What is the origin of the expression “legislate from the bench”?
7
Why do we say “Eastern Europe” but “East Asia”?
5
Why “a” bow and arrow?
0
Is “stew away” a valid English expression?
2
Do people “make parties” in New York?
8
What influenced people to start using “I'm good” in answer to “How are you?” and in other contexts?
11
What is the origin of the use by Texans of “them” to mean one person?