A word for an array of colours?

I'm using it in a sentence akin to "The light glinted off of the something glass" the sentence can be reworked as long as the describer works for me I don't mind.

You may use iridescent :

The obvious choice for me would be prismatic:

It obviously works well in the context of glass.

Palette was the first word to come to mind for me. As in a palette of colors a painter would use.

The light glinted off the glass palette. 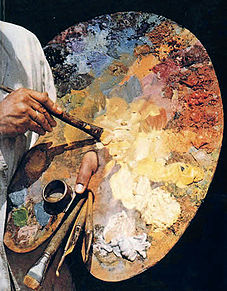 Colorful sounds so simple, is there anything against that?

Multicolored or many-colored are synonymous, see for more synonyms: https://www.google.com/search?q=define:colorful

I guess simple is important if you want the reader to understand easily.

You may also use: Variegated:

"The light glinted off the variegated glass"

The light glinted off the glass as if glimmers of dreams and imagery from a kaleidoscope.

The light glinted off the kaleidoscopic glass.

The first proposal uses no adjectives, it relies on the minds imagery to figure out the objects and light. The second proposal adjectivises the original noun. Especially in the first sentence, word kaleidoscope is last, with the ambition of adding emphasis.

a. An optical instrument, consisting of from two to four reflecting surfaces placed in a tube, at one end of which is a small compartment containing pieces of coloured glass: on looking through the tube, numerous reflections of these are seen, producing brightly-coloured symmetrical figures, which may be constantly altered by rotation of the instrument.

b. fig. A constantly changing group of bright colours or coloured objects; anything which exhibits a succession of shifting phases.

The light glinted from the opalescent surface of the glass.

or, if you don't mind padding out your word count:

The colours of the light glinting from the glass surface spanned the entire gamut of the rainbow.

Shimmer is to shine with a soft tremulous or fitful light.

If the glass is separating the light into visible bands of color, I'd use 'prismatic.'

"The light glinted off of the prismatic glass."

I've seen Nabokov use this word a lot in situations like this.

6
A single word for "to paint and/or draw"?
6
Word / phrase for a product/system that presents several unrelated functions
2
Word/phrase to call people who born in the new millennium
5
Correct word for a triangle with truncated points?
1
word for something that somebody likes to rant about frequently
0
Words or phrases for someone that is ready to escape quickly, usually due to danger