So far, so obvious

What is the meaning of "So far, so obvious"? Does it mean "Although out of expectation, it is actually true"?

A Google search indicates this phrase has most recently shown up in the TV series Sherlock:

SHERLOCK (still looking at his phone): Of course she’s not. She’s from out of town, though. Intended to stay in London for one night ... (he smiles smugly when he apparently finds the information he needed) ... before returning home to Cardiff. (He pockets his phone.)

SHERLOCK: So far, so obvious.

LESTRADE: What about the message, though?

SHERLOCK (ignoring him and looking at John): Doctor Watson, what do you think?

It's also included in the book The Liar by Stephen Fry: 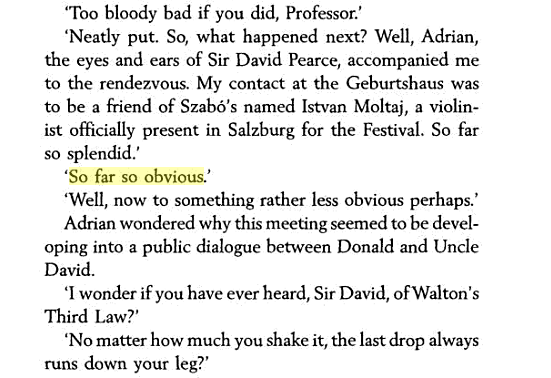 My interpretation of the usage of the phrase from the two above examples is that it is a sort of tongue-in-cheek phrase used in a manner slightly similar to "tell me something I don't know", but closer to "let's move on to what isn't completely obvious". In Sherlocks case, the phrase is targeted to himself, when Fry uses it it's one character telling it to another. Here's another example of how it's used, from Philosophy at the New Millennium by Anthony O'Hear:

It's worth nothing that all of the three above original sources are British. It's quite possible this phrase is much more common (or only used) in British English, which might be worth keeping in mind.

No, it doesn't mean "Although out of expectation, it is actually true."

Sherlock Holmes is too smart for the rest of us. Things which take real mental effort for the rest of us are ridiculously easy for him. So he can say snotty things like "So far so obvious", which means Yes yes, that was a trivial deduction for me; now let's continue.

Not the answer you're looking for? Browse other questions tagged meaning phrase-meaning or ask your own question.