Why did Servia become Serbia?

Reading contemporary histories of the First World War, I noticed that at the start the nation in the Balkans is referred to as Servia, but in numbers published after the back half of 1916, it has turned into Serbia.

Is there any particular reason for this? 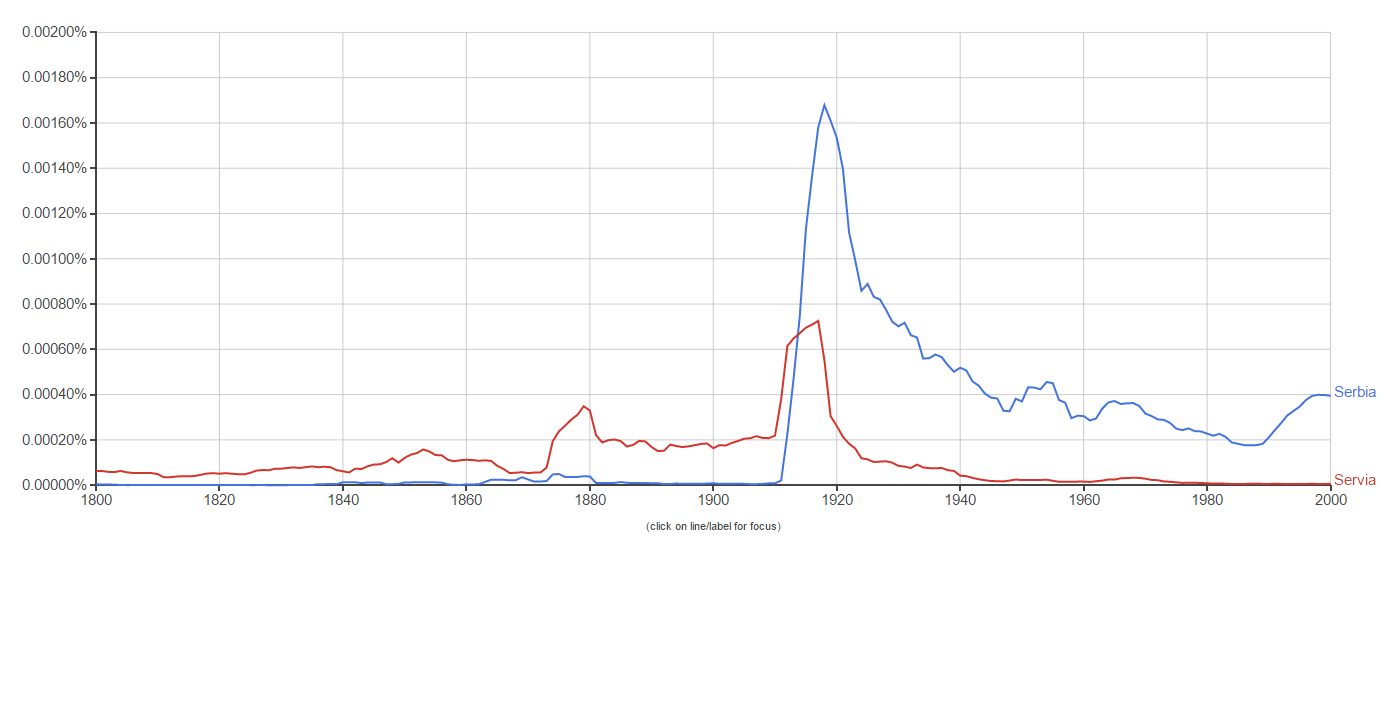 which seems to correspond to my observation.

From a not credible source:

and from another similar source :

It is called Serbia using the Cyrillic script and Servia when using the Latin script.

and finally a credible one could be find at http://paperspast.natlib.govt.nz/cgi-bin/paperspast?a=d&d=NOT19150305.2.51

Servia was the medieval Latin spelling of Serbia according to Etynomline.

Servia suggested a false connection with Latin servus 'slave', reflected in English serf and servile (whereas serve and service have more positive denotations). Similarly, Rumânia was changed to România to reflect Romanian român 'Roman' rather than rumân 'peasant, serf', although too late to affect French Roumanie (English has mostly switched from Roumania to Romania). In both cases the desire was to avoid a name that sounded like "Serf-land".

Actually the connection with Latin "servus" is from the correct medieval title of the numerous Balkan vassal statelets (Bosnia, Duklya, Zeta, Rashka...) which were generally named by the Roman Catholic Curia as "Regni Serviae" - 'Kingdoms at Service':

Servia is a Latin term imposed by the Vatican for distorting historical facts. Substitution of letters (v i b, h g j ž etc) is one of the basic methods of blurring facts to distort history. Тhe only correct name is Serbia (lat/eng) - Србија / Srbija ( српски / srpski )

Not the answer you're looking for? Browse other questions tagged historical-change toponyms or ask your own question.

27
When did "while" and "whilst" become interchangeable?
6
When did 'venereal disease' become STI?
0
When did saying "I'm offended" or "I find that offensive" become a common phrase in English?
15
Why did /x/ change to /f/ in English?
8
When did a mother giving birth become the deliverer instead of the deliveree?
9
Why did "thou" become obsolete?
9
Why has the "plague" on our houses become a "pox?"
2
When did "serie" become obsolete in English?
0
Why did "which" lose its L (it was "hwilch")?
0
Why did the vowel in "Christ" become long in moving from Old English to Middle English?