Word / phrase for a product/system that presents several unrelated functions

What's the word (or phrase) for a product/system that presents several (probably unrelated) functions? Swiss Army Knife is a good example of such products. I'm looking for something other than multipurpose. In fact, it's a multidimensional and multiple-aspect system.

The OP hasn't explained why the term multipurpose is not appropriate for their needs, it seems a perfectly appropriate expression to describe any object that has more than one function.

There are; however, viable alternatives. I suggest: multifunctional and all-purpose 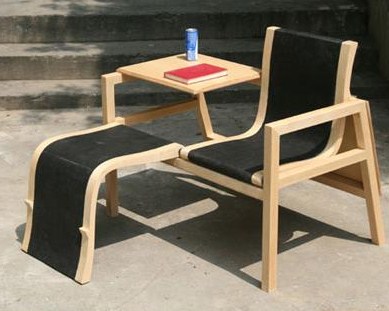 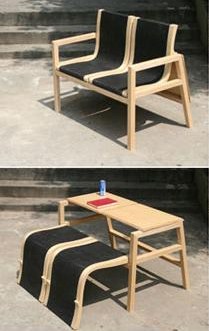 Thanks to @displayName who has pointed out that the OP needs this word for a software product. That type of clarification should be made or edited in the post, and not left in the comment section.

In today's world of increasingly integrated and multifunctional software programs, it seems particularly important to theorize and empirically examine the relationship between task and technology in the formation and influence of CSE.

Today, all-purpose software for microprocessors and other software tools determine technical progress in most fields …
source

If you want to shun multipurpose, you may consider calling your product multifaceted, to give the connotation that it has many sides, or solves a problem using multiple approaches:

Where one of the usages of facet is:

: a part or element of something
Merriam-Webster

A note about the ultimate Swiss army knife: Just because you can build it doesn't mean you should: 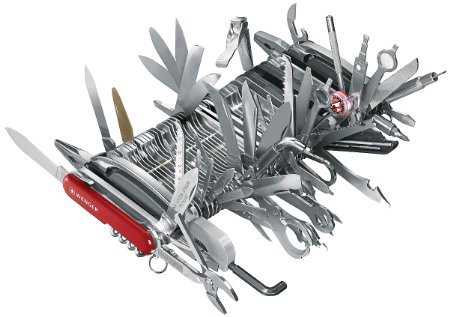 Since you have given the example of swiss-knife, I searched for the description of swiss-knife to see how do the manufacturers and users of swiss-knife actually describe it. The word they have used is multi-tool. Multi-tool is by definition a versatile hand tool that combines several individual functions in a single unit.

Here are other close synonyms:

I'm expecting you to say that "multi-tool" is not essentially a word applicable to all systems and dimensions and is, again by definition, just a manual hand tool and not an automatic device. Perhaps, if you would tell us the sentence you are trying to make then maybe we can locate a better word.

I have realized that sometimes even very simple words explain our thoughts in entirety and that's the only purpose of languages and words. For example, To describe a robot that can do thousands of unrelated things like cook food, perform scientific simulations and calculations, rescue people in emergencies, guard home, regulate air conditioning, do yard work, buy groceries, tell bed-time stories, play carom with you and what not... the manufacturers will say that they have created a smart / intelligent / next-generation robot.

Update - 1: I just saw in the question's comments that you want to describe a software with the adjective for a 'Swiss army knife'. You know, you could even just say that This software is the Swiss Army Knife for x, y, z domains, if that brings home the point you are trying to make.

Update - 2: For the sake of correctness of my answer, here is a link which confirms that 'Swiss Army Knife' can be used as an adjective and it literally means exactly what you are asking for.

Perhaps "Versatile" is the word you're looking for.

Here are some ideas to get you free-associating:

accordion -- inspired by the accordion folder

The most accurate word I can imagine for a product that does multiple things and does those things well is multifaceted.

Depending on what the product does, you can use the prefix "cross" or "trans" to describe, respectively, the possibly different areas it helps connect or the main area from which it goes beyond. For examples: cross-reporting, cross-media, trans-gaming

The adjectival phrase all-singing, all-dancing may be what you're looking for.

Amusingly, in German the phrase is "Eierlegende Wollmilchsäue", or egg-laying, woolly milk pig.

It could be as a synthesis.

the combining of the constituent elements of separate or abstract entities into a single or unified entity.

'The brain combines elements of the body's five very different senses and synthesizes them into one experience.'

The old ClarisWorks or AppleWorks was a single software application with multiple functions (word processor, spreadsheet, draw), or "integrated software package" of the genre office suite. Perhaps your application is a "your domain" suite?

Another word related to performing multiple tasks or solving multiple problems is solution, as in "the company purchased a network security solution". Such a solution might be software product(s) that acts as a firewall, scans files for viruses, monitors the network for abnormal communication (NIDS), etc. From a marketing perspective, adjectives commonly found in the names of software products that perform multiple tasks are complete and total.

13
Single word for shopping after comparing price and features across multiple shops and product types
4
A word or phrase for an unremarkable event that occurs with uncanny frequency
2
Word/phrase for negative side effect(s)
19
Word or phrase for tasking an expert with jobs that a novice could do
1
Word or phrase for inability to enjoy something fun
0
A word that describes both (product) registration and (product) survey data
5
Looking for word or succinct phrase for group incompetence
1
Word or phrase for a commonly-used clause at the beginning of a sentence, such as “It's almost as if”