Idiom / phrase for a treasure in a ruin

How to describe some thing valuable that could be gained from an unexpected place? I heard a Persian Idiom that could be appropriate for this case:

a treasure in a ruin.

Is there any equivalent idiom or phrase for that?

As another (less) probable source for the idiom, below is a poem from another great Persian poet "Sa'di" (alongside with "Ferdowsi, the Great", "Rumi" and "Hafez"):

If livelihood were increased by knowledge /None would be more needy than the ignorant.

Nevertheless the ignorant receive a livelihood/At which the learned stand aghast.

The luck of wealth consists not in skill/ But only in the aid of heaven.

It happens in the world that many / Silly men are honoured and sages despised.

If an alchemist has died in grief and misery/ A fool discovered a treasure amidst ruins.

(The Gulistan of Sa'di from http://classics.mit.edu/Sadi/gulistan.2.i.html)

There is the idiom of a diamond in the rough:

someone or something whose good qualities are hidden This film is one of those diamonds in the rough, a wonderful gem that almost no one has noticed.

Etymology: based on the idea that you cannot see the beauty of a diamond (jewel) when it is rough (not yet cut and filled with brightness)
The Free Dictionary by Farlex

An uncut diamond doesn't look much different from ordinary quartz, as illustrated by the picture below of the 253-carat Oppenheimer Diamond. 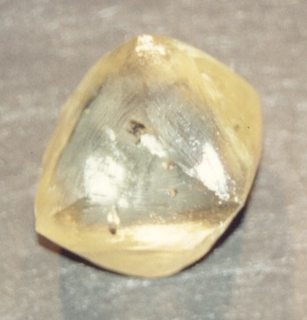 A lily among thorns.

Something positive that stands out from the negative {snakeeyedbarbie at Yahoo! Answers}

As the lily among thorns, so is my love among the daughters

A more literal version would be a treasure trove.

It's funny, the common phrase, today, I think which is honestly closest to just what you mean is simply:

Also, "What a great find." You're talking about the case where you, for example literally, purchase a great thing at a garage sale.

If you are talking about a person, fantasy sports fans and draftniks would refer to such as person as a 'sleeper' edited adding citation

noun ... 5. Informal. something or someone that becomes unexpectedly successful or important after a period of being unnoticed, ignored, or considered unpromising or a failure:

The play was the sleeper of the season.

For the more general the answer might be a serendipitous find.

Further, the act of finding these things would be called "serendipity"

A less poetic synonym might be "salvage", which means something saved from the wreckage.

What's the treasure and what's the name of the ruin? It's, The Lost {blank} of {blank}.

E.g., The Lost City of Atlantis or The Lost Jewels of Nabooti

As also found as an answer to some of your similar questions, and in response to your comments here, I'd go with the word andrew submitted for you:

Some thing valuable that could be gained from an unexpected place is serendipitous.

the occurrence and development of events by chance in a happy or beneficial way.

However, here's the original translated context of the idiom:

–Selected Poems from the Divani Shamsi Tabriz. Edited and Translated by R. A. Nicholson Ist published in 1898; rumi.org.uk/divani_shams.htm

And with this context, I submit my interpretation of the full idiom, The man of God is a treasure in a ruin (I think we might have to ask this on philosophy or one or the religious sites, to better understand it in the first place):

The path of the righteous man is beset on all sides by the inequities of the selfish and the tyranny of evil men. Blessed is he, who in the name of charity and good will, shepherds the weak through the valley of darkness, for he is truly his brother's keeper and the finder of lost children. –Ezekiel 25:17 UD

Or: Blessed is he, the man of god, who is beset on all sides by evil.

7
What's an alternative for "hidden gem"?
5
What does "gold is where you find it" mean?

5
Is there a word/phrase/idiom for temporarily satisfying strong feeling of hunger?
18
Is there an English idiom for Bengali idiom "সবজান্তা গামছাওয়ালা"(wise towelsman)?
8
Equivalent for the Persian idiom "Khaste Nabaashid"
4
Describe someone who chooses the worst option for doing the work
4
Is the idiom "as neat as a pin" an American phrase?
21
Idiom or expression request that would convey same meaning as this Persian set phrase " simple yet impossible to imitate"
4
Idiom, phrase, or word for "no clear division"
10
Idiom or phrase that calls for solidarity with others in problem
1
When a limited but working version of something is better
1
Does the idiom/phrase "place is your swamp" exist or is it worded differently?