Need a bit of help with drawing parse trees

I am experiencing a bit of trouble in drawing grammar trees or parse trees. I can draw simple enough trees such as "The girl with long hair is looking at you" and longer sentences with complements (At least I think I can draw them properly). Since I just started exploring grammar trees a few days ago there are a lot of things which I don´t know how to draw. For example " Living in China for so many years made me miss home" How would I draw the clause "Living in china? Another problem is the relative clause. How does one draw that? A complement clause you would mark with CP, but I am at a loss when it comes to other clauses. I know that this might seem like silly questions but I would love to be able to draw parse trees properly. English is not my first language and my knowledge of English grammar isn't the best so I apologize if the question is strange!

I suggest you search online for the phrase parse tree online

I did so and found this: Parse a sentence

I then pasted in your sentence, Living in China for so many years made me miss home.

Here is the result, 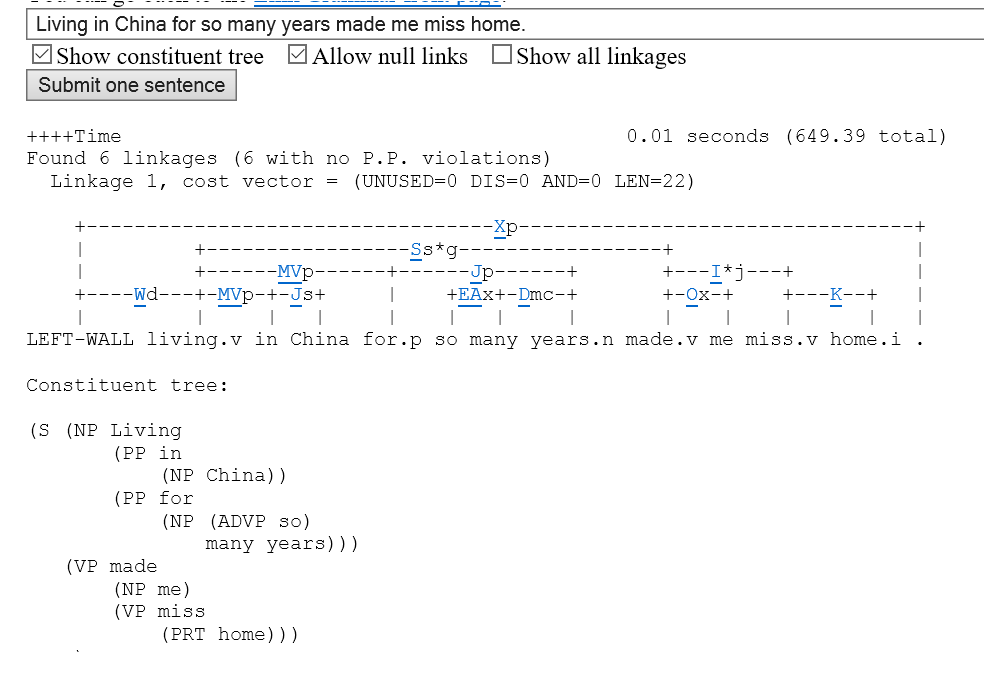 I'd start with a structure that gives an account of the sense, then try to explain the differences between this and the word-for-word details.

But of course there is no "my" present, so the derivation will have to involve deleting it, somehow.

The logical object of "cause/make" doesn't seem to have a complementizer, so this is a problem. But there is a passive of "make" that comes close to working here, "I was made to miss home", where we have a "to" that could be from the for-to complementizer, giving us

Somehow in the derivation the "for" is lost, and the "to" is lost, I guess. The loss of "to", I happen to recall, can be historically documented, since it sometimes turns up in Shakespeare's English, in similar "make" constructions.

So, how I would parse this begins with an idea about its meaning and proceeds with a series of conjectures about how the words get into the sentence form we observe.

4
Can someone help me diagram this sentence?
0
Did I draw this phrase diagram correctly?