What does “It’s always a pig in a poke. So why not a pig who pokes?”mean?

“It is really hard to know who you’re electing. That’s because you can’t foresee what crises will crop up, or what gremlins of insecurity and perversity the White House will inevitably elicit in presidential psyches.

You can have a candidate like W., after sincerely telling us he will have a “humble” foreign policy, proceed to stumble jejunely into decades-long wars in the Middle East. You can have a charming newcomer like Barack Obama, ascending like a political Pegasus, who loses altitude because it turns out he disdains politics. It’s always a pig in a poke. So why not a pig who pokes?” http://www.nytimes.com/2015/08/09/opinion/sunday/maureen-dowd-trump-the-disrupter.html?

I know “a pig in a poke” as a cliché. But I cannot make out what the next line - "Why not a pig who pokes” means?

Does it mean a would-be President is allowed to become a chameleon once he attains the throne? What does the second “poke” as a verb mean?

As the second thought after rereading the quote, I came to think “Why not a pig who pokes” means “Isn't it good to have a pig who pokes out the poke and reveals what he really is, or attempts?” But I’m not sure of whether it’s on the mark or not.

It is play on the old saying a pig in a poke that is something you buy without actually seeing what it really is.

A pig who pokes is a pig who: 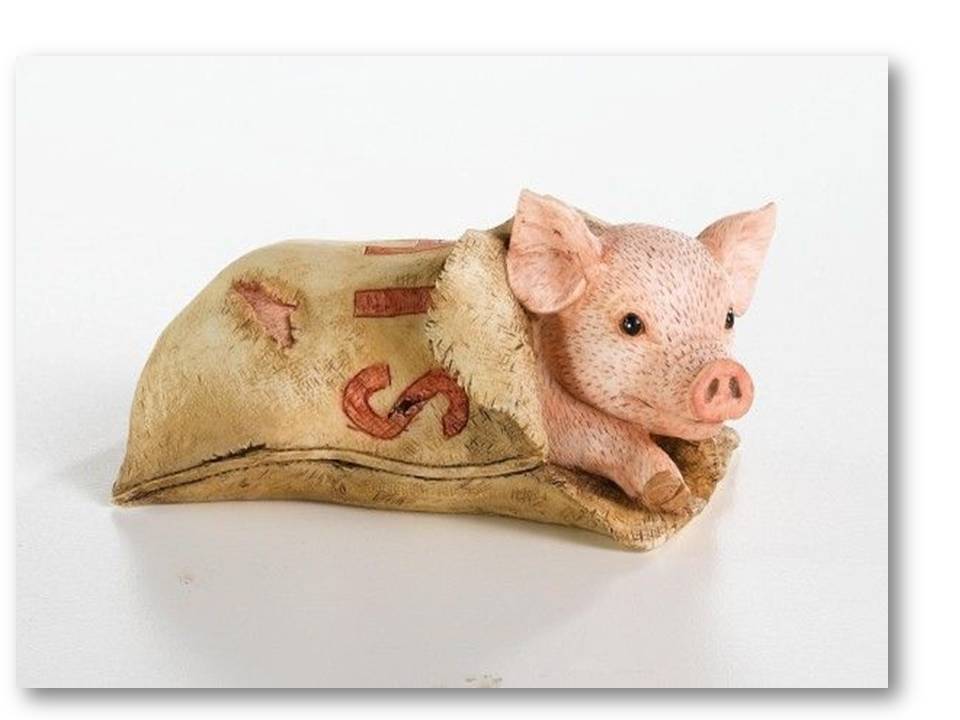 So you know in advance who you are voting for.

The author is saying, whenever we vote for a President, we don't actually know who we are voting for (a pig in the poke) so why not a pig who pokes, a candidate who shows his real nature/intentions during their campaign rather than after being elected.

It means: "Since you can never really tell what you're getting when you go to the polls, why NOT vote for a bad-mannered, bad-tempered, boorish person who throws personal insults at everyone who disagrees with him?"

The author is arguing that many people see casting a ballot as essentially a blind choice - like "buying a pig in a poke" - so the fact that a candidate behaves like a pig during the campaign may not be considered a disqualification by some voters.

"Pig in a poke" meaning "something hidden" has already been answered. Another meaning of "poke" was a an type of women's bonnet, which hid the face from view. There are some 18th century cartoons here: http://mikerendell.com/a-pig-in-a-poke-an-eighteenth-century-view/

For "A pig who pokes", The "pig" part seems straightforward: "Why not a pig...." = "Why not somebody who behaves like a pig," or "who looks like a pig" (see Google images for lots of examples.)

There are several meanings of "poke" that are relevant as well as the literal one of "jab" or "prod":

"Poke a fire" = "cause something to blaze up" (e.g. "Trump poked the immigration fire")

"Poke around" or "Poke ones nose into" = "go searching for something", often used in the sense of "go looking for trouble."

"Take a poke at someone" = literally or metaphorically "hit someone", or "have sex with someone" (not necessarily with their consent).

A poke is a bag. When I worked on a hop-farm, the light hessian bags into which the hop-flowers were fed were called pokes. Oddly, the very large, densely-woven, tubular bags into which the dried flowers were pressed were called pockets, although you'd think that pocket was a diminutive of poke. So buying a pig in a poke was buying a pig in a bag, unseen. Perhaps small pigs were once carried to market in bags.

The phrase "buying (or selling) a pig in a poke" refers to buying something you can't inspect and trusting that it really is as described. "You can't open the bag here, since the piglet might escape, but I promise that it's a healthy little one, definitely worth the price I'm asking for it."

Obviously, the seller may have been lying -- the thing in the bag might not even be a pig. Hence the phrase generally does imply a high (or at best unknown) probability of fraud. It's often used to describe vague political promises, for example.

"Why not a pig who pokes" is just wordplay based on this traditional phrase. To be sure if the intended meaning (if any), I'd need to see it in context.

8
What does “it’s not going to suck itself ” mean?
4
What does Rick Perry’s “God uses broken people to reach a broken world" mean?
13
What does "You are not Irish" mean?
6
What does “binder” mean? Why did it become a political buzzword?
50
What does “Barack Obama’s real crime is presiding while black” mean?
9
What does “Come-to Jesus (moment / stage / meeting)” mean? Is it a popular word?
4
What does "storm–the–gates populism” mean?
5
What does “GOP's 'Pocahontas' problem'” mean?
6
What does “It’s just another day in paradise.” mean in political and diplomatic context in association with U.S. and Russia summit talks?