Is there an English equivalent of the German word-pair "selbe/gleiche"?

In German both words, selbe and gleiche, mean something like same in English. But they have a subtle difference in meaning. Take a look at this sentence:

As you can see in the picture below, both people eat the same (gleiche) kind of soup, but they don't eat from the same (selbe) bowl of soup. 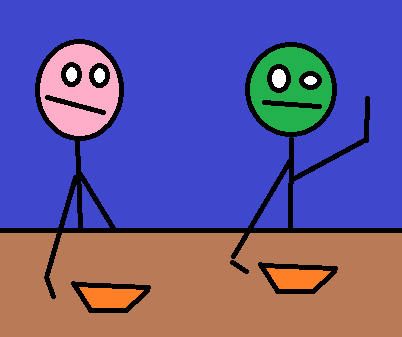 I believe that distinction, or specificity, cannot be found in Romance Languages either.

6
Word for the behavior of people who complain at everything you do
10
Translation of German "Bolzplatz" – what's the name for an outdoor area whose purpose is to provide room for soccer/football?
0
What English construction matches the Boolean condition of nand?
36
What do you call these "rolls" on old clothes?
0
Is there a word for the visual appearance of a word only?
2
Is there a word for messy eating?
11
English equivalent of מסגרת, used to describe a person who gets along in a routine with a rigid routine, responsibilities, etc