Two men standing with clenched fists are US athletes.

Here fist is a noun and to describe a noun, an adjective is used. In this case the adjective should be clenched but the dictionary shows that clenched is a verb.

So does that mean that verbs are also used to describe nouns?

There is nothing special about the word clenched: virtually all participles can be used not only in verb phrases alone but also as participial adjectives in noun phrases.

However, you should also keep in mind that not all words that modify nouns are adjectives, nor does modification of a noun automatically make a word an adjective.

Lack of infrastructure facility can be a major cause for under development.

The word infrastructure is an adjective or a noun, the answer is that it is a noun, not an adjective.

Modifying nouns does not make in and of itself make something an adjective; there are other criteria. Nouns can modify nouns, and so can verbs.

Mr.clenched is both form of words, noun as well as verb. Read meaning of words in full. You may need Google to find meaning use following format

This will show as follows 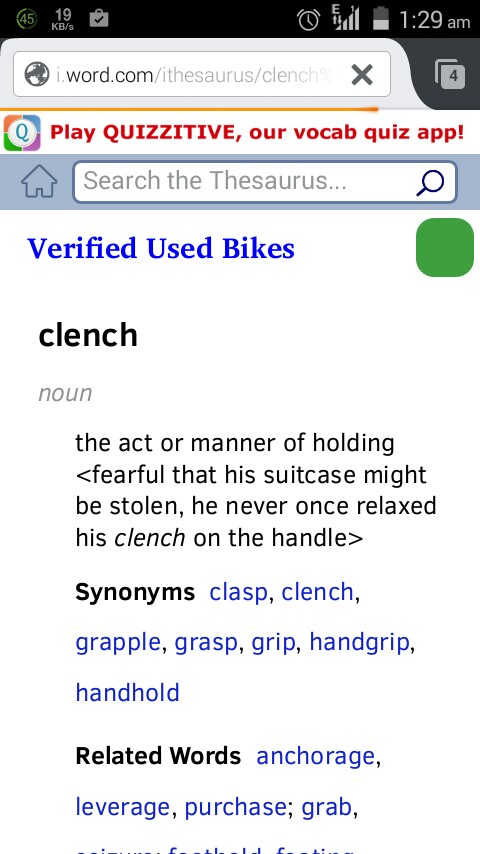 Not the answer you're looking for? Browse other questions tagged grammar verbs nouns adjectives or ask your own question.

6
What do you call a verb which accepts 2 nouns?
5
How to convert verbs to nouns, and nouns to adjectives?
3
Identifying verb types, nouns, adjectives and adverbs in a sentence - 5th grade
2
How appropriate is the usage of Adjective "biweekly" when there is no noun like "biweek"?
0
A verb for loutish, boorish, uncouth behavior