Can “shrugging” only be done with shoulders?

He shrugged his shoulders.

Is there anything else that can be shrugged, besides shoulders? To me it sounds like duplication when used in this way. I'm aware of constructs like "He shrugged it off." but that's not what I'm interested in, and it also implies the use of shoulders, doesn't it?

So why the need to specify the shoulders as an object?

[edit: I also find "he shrugged his eyebrows" but that's rather rare.]

Browsing through COHA and Google Books, I can’t find any body parts that can be shrugged apart from shoulders. In any case, the intransitive use — she shrugged etc. — is certainly always understood as the shoulder-gesture — it is, as you say, essentially redundant.

So shrugged is very nearly a stormy petrel. The only other thing you can do with it (that I can think of or find in the dictionary) is to shrug something off.

(If anyone at a subscribed university or library is reading, by the way, the OED online would be my best bet to look for other usages — their historical quotations will hopefully show how it came to be used this way. Unfortunately I’m currently travelling and so without access. Also, a clever COHA search would probably be able to automatically look there for instances of anything non-shouldery being shrugged, more thoroughly than I could browse.)

According to Google Ngram, men are shrugging their broad, heavy, great shoulders less and less.

But before that, let's see what men and women shrug most often according to Google Books.

For men I entered the expression shrugged his *. The asterisk symbol which follows will display the first word that comes after the pronoun his. Note that it is superfluous and counterproductive to search for "he shrugged his" because the possessive pronoun already tells us the subject is male and moreover you would ignore the innumerable instances where a proper noun or noun phrase would be used, for example "Daniel shrugged his", "Her husband shrugged his" etc. 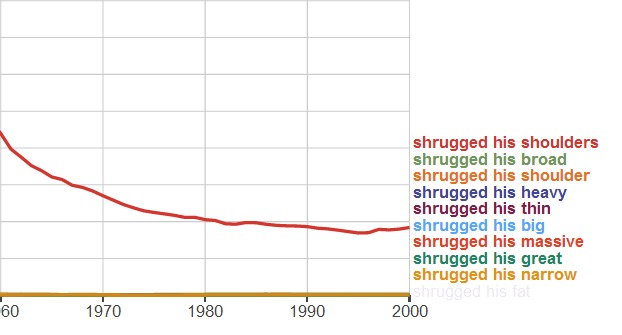 For women I repeated the same operation

The results proved conclusively that shoulders is the only part of the human body associated with the verb, shrug.

Men only shrug their great or massive shoulders, I was hoping for something a little more titillating. You may have noticed that I forgot to add he shrugged his massive * but if you don't believe men have massive shoulders, do the operation yourselves...

Oh, all right. I'll do it myself

Unsurprisingly, the adjective broad is most commonly associated with male shoulders, but what I do find peculiar is the drop in the number of times men shrug their shoulders (see the penultimate chart), apparently there was an impressive peak in the 1930s followed by a steady decline. I wonder why?

Is there anything else that can be shrugged, besides shoulders?

Yes! You can also shrug these things off

I Googled "shrugged off the" in Google Books and found...

I stopped at page forty, but as you can see there are many other things besides shoulders which can be shrugged off, and one of them being hands.

Yes, it does and as far as shrug is performed by lifting both shoulders up, so i think there's no need to say shoulders.

Also, Google Ngram shows that the usage without "shoulder" is more common.

I believe we say this man is shrugging his hands, even if he does not move his shoulders when he does it... 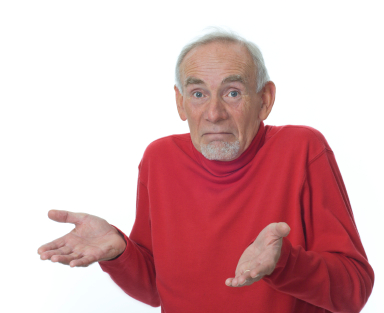 Not the answer you're looking for? Browse other questions tagged word-choice verbs collocation objects or ask your own question.

29
Is there a term for words that have a single meaning or are only used in a single context?
5
“Gnashing teeth” - why only teeth?
5
What do you call the gesture of raising both hands while shrugging your shoulders?

1
What determines the meaning of ‘rise’ with no adverb or preposition?
2
A simple word for one who seeks adventure and tries to help, but hurts more than they help
0
“Drink up”: lost in translation: how can it be regained?
1
Damage incurred/sustained/inflicted
2
How do you concisely make clear something exists only once?
0
How to properly format “systems as diverse as X and Y”?