It isn't related to rhino horn, because rhino horn isn't used as an aphrodisiac in traditional Chinese medicine.

Wiktionary doesn't have any etymology info

The Online Etymology Dictionary says that it is based on the slang expression "have the horn", but it doesn't have any etymology info on that phrase.

The OED has this definition for the slang sense of horn:

An erect penis; an erection. Also in phr. to have (also get) the horn: to be sexually excited. (Not in polite use.)

The earliest two citations in the OED are:

(Horn 5c is the definition of horn that I've cited above.)

Green's Dictionary of Slang gives the following etymology for horn:

[resemblance to an SE horn]

(where SE means "standard English" according to his list of abbreviations).

There doesn't seem much more to say - it's a pretty obvious metaphor.

Something I remember reading a long time ago on Google Books: The Words of the Day. The Unlikely Evolution of Common English by Steven M. Cerutti, Ph.D. 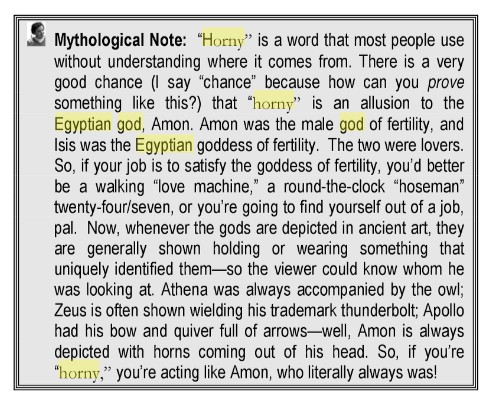 Several words derive from Amun via the Greek form, Ammon, such as ammonia and ammonite. The Romans called the ammonium chloride they collected from deposits near the Temple of Jupiter-Amun in ancient Libya sal ammoniacus (salt of Amun) because of proximity to the nearby temple. Ammonia, as well as being the chemical, is a genus name in the foraminifera. Both these foraminiferans (shelled Protozoa) and ammonites (extinct shelled cephalopods) bear spiral shells resembling a ram's, and Ammon's, horns. The regions of the hippocampus in the brain are called the cornu ammonis – literally "Amun's Horns", due to the horned appearance of the dark and light bands of cellular layers.

7
What's the origin of 'ditzy'?
12
Why is money called "rhino"?
12
Does "grim" share an etymology with the surname "Grimm"?
6
Are "Czech Republic" and "Chechnya" cognates?
1
Etymology of "norton"?
2
etymology: one trick pony
1
What is the etymology of "blameshift"?
2
Etymology of "informal British" word "bent" (meaning: dishonest, corrupt)