Where does "pizza pie" originate?

The Italianissimo pizza—pronounced /ˈpiʦ:a/—is not always spelled or called pizza around the world:

For everyone else it's just plain pizza, except...

in the USA, where some Americans call it pizza pie. I don't think anywhere else in the world (except in Vietnam and China) is the Neapolitan dish a compound word.

Different theories abound on the net: I have read claims that it's called pie because it is cut in triangles, that its round shape is reminiscent of a pie chart, some who sustain that the first pizzas baked in the US were simply called tomato pies, and others who say pizza is Italian for “pie”; however, that last claim is untrue. In Italy pies/cakes/tarts and pizzas are not interchangeable. Un dolce (“a sweet”) is the name for any cake or fruit filled tart whereas the term, torta, covers both cakes and any savoury or sweet-filling open pie. For example, an “open vegetable pie” is torta di verdure, and a “birthday cake” is torta di compleanno. When pizza dough is baked without any topping (but for a generous drizzle of olive oil and a sprinkling of sea salt crystals), it is called focaccia while in some parts of Italy the term pizza bianca (“white pizza”) is used.

I believe the English term pie refers especially to the crust, and as we all know, pies have a filling be it sweet or savoury. The classic open “pie” is topped with tomato and mozzarella cheese, but in the US the choice of toppings is limitless.

Did you know that February 9th is National Pizza Pie Day in the US? Unfortunately, I was unable to discover how old this epicurean feast is and where it originated, but it does tell me that the term pizza pie is alive and well today. Back in 1953 Dean Martin crooned

My guess is that Italian immigrants in the United States themselves adopted the duplicate name as a kind of Rosetta Stone approach to naming things in familiar Italian and unfamiliar English. A Google Books search turns up an interesting but all-too-brief note on the the possible origin of pizza pie in Arthur Livingston, "La Merica Sanemagogna," in The Romanic Review (April–June 1918):

Interpretative combinations are evident in two cases that I know: canabuldogga, “bull-dog,” and pizza-paia. I long supposed we were here dealing with "piece-of-pie" pure and simple, I believe it was Professor Ettari, of the City College of New York, who pointed out to me that pizzapaia is really pizza + pie. It is that infamous tedescheria called “cheese-cake,” a degradation of the American custard pie.

The Neapolitan dialect had a marked influence on Italglish. Ncuop corresponds to the word up. Ncuop was used alone or to form the words for "uptown" (coppetane) and "upstairs" (coppesteso). Dollaro, an obvious rendering of "dollar," never took hold among the southern Italians. Their preference was for the dialect terms scudo or pezzo. Pizza was combined with "pie" to form pizzapaia. Literally, the term is redundant because it means pizza pizza—or pie pie. Pizzapaia had sufficient ambiguity so that even the linguists of the day could only wonder at its origin and true meaning. It was used in a number of contexts: to mean pizza, a piece of pie or a specific type of pastry, or a man of questionable masculinity.

I agree with Josh61's view (expressed in his answer to this question) that the origin of pizza pie (and of pizzapaia) was almost certainly New York City.

The term pie might have been first used in New York where Italian immigrants had settled from the second half of the 19th century. My idea is that Americans rightly called it 'pie'. But since Italians told them its name was pizza, 'pizza pie' was a natural way to call it.

Evidence of usage of the expression "pizza pie" can be found in an April 21, 1939 article by food columnist Clementine Paddleford of New York Herald Tribune :

In a New-York Tribune article, printed December 06, 1903, the journalist clearly refers to the classic Italian dish. The piece is entitled: Do Fiery Foods Cause Fiery Natures? and tells us that Italian immigrants living in New York at the turn of the 20th century used to call it pomodori pizza (tomato pizza). Native New Yorkers saw its semblance to a pie and thus renamed it “tomato pie”.

In the article, the reporter misspells it as pomodore pizza, a forgiveable error, but it is worth noting that the dish did not contain any mozzarella, a cheese which would have been impossible to find in any New York grocery store in the late 1800s.

Take a lump of dough, and, under a roller, flatten it out until it is only an inch thick. On this scatter tomatoes and season plentifully with powdered red pepper. Then bake the compound.

Meanwhile, the American “green tomato pie”, and “ripe tomato pie”, both desserts, were well-known in the 19th century. It is therefore plausible that the more exotic term, pizza, was tagged onto “pie” at a later date to avoid any confusion.

The reporter also mentioned “salami pizza” and translated it as bologna pie. I don't know if “bologna” or “bologna sausage” used to stand for salami in the past, but today it is recognized as being the American name for mortadella. 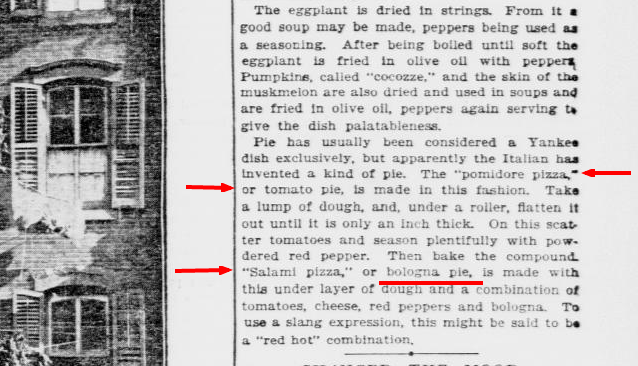 I've heard it used, but still by far, it is not as common as simply "pizza". This Google n-gram specifically of American English, compares usage.

Highly recommended: https://www.youtube.com/watch?v=v0eGUQWENMc , where you will find that "The Gaylords" (very famous in the fifties and sixties) use "pizza" and "pizza pie" indifferently. Italian pizza is simply a type of a pie, that's all. P.S.: I recommend also the other songs of that group.

My parents, who would be in their early 80s now and grew up in Yonkers on the Bronx city line never referred to pizza as pizza, it was always "hot pie"

Dad was Irish and mom was German. In the Yonkers groups on the net, many of us remember hearing hot pie in our youth.

Growing up in Bensonhurst, B'klyn, we always called a (or when ordering) a whole pie, "a pizza pie".

If you wanted a piece, it is called a "slice"

If you wanted a square, you called it "a Sicilian"...Which my favorite was from the center cut of the Sicilian pie...Which by the way, we never called it a Sicilian pie, it was refered to as a "whole sicilian"

Here's how the orders would go: "Frankie Boy, I'll have a slice please" "Two pies to go, thanks Vito" "I'll have a Sicilian from the center Joey, with a fountain Coke". "Give me two pies with pepperoni and a whole sicilian with extra cheese to go"

It's a New York thing

Not the answer you're looking for? Browse other questions tagged etymology american-english food italian or ask your own question.

7
Why is a calzone called calzone?