Describe the whistle one makes when surprised

There are many ways that a person might whistle. I'm searching for a word that describes the slow, contemplative whistle that one might make when digesting new and surprising information.

Is there a better way to describe that whistle that is "slow, contemplative"?

I single word that describes that whistling sound might not exist, but interjections or exclamations like "whew" as proposed by @Josh61 or the similar "phew" might come close

Continuing for a long time or longer than usual; lengthy
OED

Here's an example in a book about golf

One of the caddies gave a prolonged whistle of surprise and admiration. Who was this new, unknown, and infinitely mild-looking champion who made the club hum through the air like a hornet?
Google Books: The Greatest Golf Stories Ever Told By Jeff Silverman

The most common adjectives according to Google Books Ngram are low and long, both were used in the Oxford Learner's Dictionary example

the most common noun is the one you are looking for, and the one used in the Oxford Learner's Dictionary example, surprise 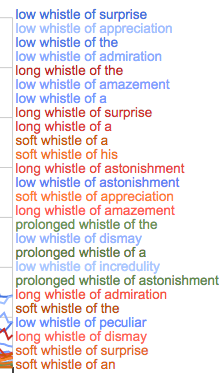 A whew can also convey the idea of a surprise:

If it looks as though you might have to find an adjective for your whistle. It'd be one that means the same as "contemplative".

Ah! But there you have it!

I think this is just fine. And you don't need "long" with it:

contemplative: Expressing or involving prolonged thought: she regarded me with a contemplative eye - Oxford Dictionaries

What I really like about "contemplative whistle" is that it takes about the same time to read as it does to make the whistle. You need a longish adjective, I think.