Is there a word for the feeling of wanting something material?

Is there a single word that describes the desire for something material?

I'm thinking "greedy", but that implies a desire for more material possessions generally, it's not specific to seeing a single item and wanting it. "Desire", of course, is accurate, but again that is too general - it's not specific to material goods. Is there a word (or maybe short phrase) specifically describing the desire to acquire a particular item?

If you want a noun, covetousness. But here is one case where the verb does most nicely: “I covet that.”

If you can denominate sexual desire with the term lust, I anticipate no insuperable problem with the scriptural baggage of covet.

Somewhat obvious suggestion, but how about materialistic?

1) The theory or attitude that physical well-being and worldly possessions constitute the greatest good and highest value in life.

2) Concern for possessions or material wealth and physical comfort, especially to the exclusion of spiritual or intellectual pursuits.

Being covetous often implies what you want belongs to someone else (which could even include your neighbour's wife as well as his ass).

To my ear, acquisitiveness might simply imply a tendency to accumulate possessions (by not discarding things you no longer need, as well as being keen to acquire them in the first place).

Caveat emptor: this answer, offered with levity, is directed specifically toward the example of the desire felt toward an automobile, rather than toward material objects in general, which I believe is a manifestation of MATERIALISM.

Well, if this was a simple one to one proposition, like hunger is want of food, and lust want of sex, then perhaps you could say that the desire for a car was want of mobility, i.e., immobility, or the feeling of being ... stuck i.e., blocked, wedged, or jammed. (links are to Merriam-Webster online)

Unfortunately, I think that this want is less directly tied to the issue of mobility in general, and is instead, highly specific, often directed toward a certain car, one particular car out of many cars (I know. I've seen the look.). So, perhaps the best way to describe this ... desire, is just to call it what it obviously is: lust. In this case, Car Lust. ;-)

Car Lust: extreme desire of an automobile. Usually happens after driving an awesome car, usually a friend’s or a rental. “Dudes, I have serious car lust after driving that 1969 corvette!”

(For definitions of "Car Lust," see definithing.com & the Urban Dictionary) 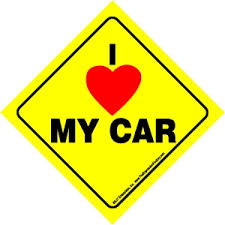 I think acquisitive comes close to what you are looking for:

Another possible word could be longing "He had a longing for the beautiful painting."

Defined as: a strong desire for something, particularly something unattainable.

While it is not commonly used (in my experience) in the first person, to hunger for something seems very close to what you want. It evokes the intense, immediate desire for something tangible, such as food, but can be used to speak about desire for almost any material object.

It can also be used for less material concepts, such as hungering for love or fame.

From "Country Joe and the Fish"'s song, "Porpoise Mouth":

I hunger for your porpoise mouth, and stand erect for love.

Covet is also the word that first came to mind for me. You covet the car. However, can covet anything - a person, money, items, activities. It is not necessarily "material"