Word for Thing Being Described?

The descriptor is the term that describes something. Is there a word for that which is being described?

Many English words exist that have this "affected-affector" relationship. For example, it exists in mathematics, specifically in regards to arithmetic in the following forms:

A person or thing to which a linguistic expression refers.

I did some more research actually and I found exactly what I was looking for! What I did was I looked up descriptor in the Oxford English Dictionary (OED) and looked in the "nearby words" section. Turns out that a word for it was used as early as 1933: descriptum. See clickable screenshot below.

Borrowing from formal grammar, you may be interested in using subject. Quoting from Capital Community College Foundation:

The subject of a sentence is the person, place, thing, or idea that is doing or being something.

For an example, consider:

That is a really pretty painting. It is simply sublime.

The painting is the subject of the sentences; it is the thing being described by the speaker. In the phrasing of the quoted source, the painting is being pretty and sublime.

Another term that could apply is object. In contrast to the subject of a sentence, the object is the recipient. Formal English grammar further breaks it down into direct objects

The art critics said "truly sublime" as they described the painting.

* Subject: The art critics
* Direct Object: "truly sublime" - an adjectival phrase, quoted, turning it into a noun.
* Linking verb: as they described
* Indirect object: the painting

A direct object is the receiver of action within a sentence.
The indirect object identifies to or for whom or what the action of the verb is performed.

In both cases, the definition of object applies to your question.

object [n. ob-jikt, -jekt; v. uh b-jekt]
noun
2. a thing, person, or matter to which thought or action is directed:
an object of medical investigation.

As Jim Reynolds points out in the comment, these words are fairly broad. They are hypernyms of your specific example. It seems that the askers own find of "Descriptum" is the most accurate, most specific word. Nevertheless, subject and object remain well understood parts of speech. The sentence "This painting is the subject/object of the description in question." is perfectly understandable. Whether subject or object is more correct depends on the grammatical voice; in other words, the phrasing of the description itself.

The descriptor and the described thing?

I can't think of a specific word which could be used in any context, but I can suggest:

Anyways, I would prefer saying "the described thing, person, object, place, etc." to using a word most people never heard.

Although Edwin's and Patrick's answers are ideal for the general case, for the specific case of functions such as the ones being listed one can also use argument:

Argument: (Mathematics) an independent variable associated with a function and determining the value of the function. For example, in the expression y = F ( x1, x2 ), the arguments of the function F are x 1 and x 2, and the value is y.

I wonder if 'element' does the trick.

When used appropriately 'el-e-ment' can convey to another a comprehension of the 'thing' being described as well as the context in which that 'thing' is embedded.

El-e-ment is variously defined as follows:-

"an essential or characteristic part of something abstract"

"a small but significant presence of a feeling or abstract quality"

Yet the word generally infer

Element is effective when describing individual/singular objects/events, group/complex things or dynamics, it works when describing observations or contemplation of physical and metaphysical events/phenomena, it is used in mathematics, psychology [i.e., the fundamental principles of Gestalt] and even the spiritual. See below for some examples. 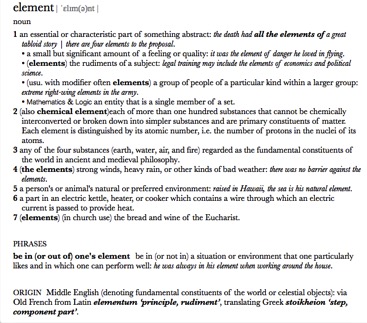 0
What is a word for something that isn't a word?