Something like the old saying "for want of a nail the battle was lost", only highlighting that each intermediate issue was a problem in its own right, not just a stepping-stone to the final disaster.

Is there a common word/phrase that specifically describes this? I'm thinking "cascade of ever-increasing problems", but this seems clumsy, and I suspect there might already be a neat word or expression that covers it.

Snowball effect, which Josh beat me to, is the best choice. 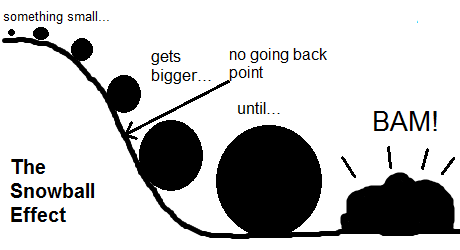 Cascading failure can also be used.

A cascading failure is a failure in a system of interconnected parts in which the failure of a part can trigger the failure of successive parts. Such a failure may happen in many types of systems, including power transmission, computer networking, finance, human bodily systems, and bridges.

In chaos theory, the butterfly effect is the sensitive dependence on initial conditions in which a small change in one state of a deterministic nonlinear system can result in large differences in a later state.

Or the domino effect/chain reaction:

A domino effect or chain reaction is the cumulative effect produced when one event sets off a chain of similar events. The term is best known as a mechanical effect, and is used as an analogy to a falling row of dominoes 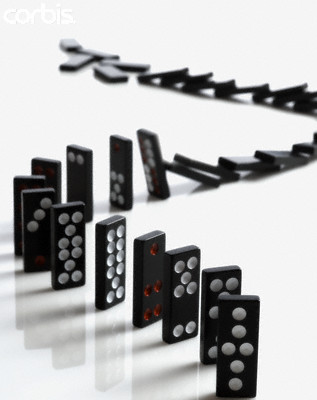 Snowball effect may apply to you description:

While I prefer snowball as an answer (provided by Tusher Raj and Josh61), another possibility is a "death spiral."

The situation or course of action of one who is on a path toward some sort of inevitable catastrohpic failure.

A Vicious circle is another option, not a single word sadly, but an often used phrase.

Found online in multiple locations, this being one.

It seems Murphy's law is the case here. And how about to say simply : It gets worse and worse.

I've heard of cumulative errors and the snowball effect also referred to with the engineering term stacked tolerances, though I can't find much on the internet referring to it in slang, jokes, or nontechnical explanations. I only find it in the literal.

Tolerance Analysis is a process to minimize such errors, and seems to be primary a mechanical engineering term, though the concept multiple sets of tolerances causing a problem at the end of the line can apply to any engineering or cooperative problem.

1
An epigram for when one bad thing happens, it causes a chain reaction of bad things