An old car in bad condition

I am in need of a word to describe an old, bad conditioned car that is yet still running.

However, this shall be used in a work of literature, so a neat paraphrase would be fine.

Somewhat old fashioned, and not an adjective like your examples, but a noun, jalopy:

Comments below suggest adding the following:

Usage example: "We hopped in the jalopy and rattled off to town."

Competitors: Words like junker, heap, and clunker are probably also heard more frequently in the New York than in the south. Jalopy has the advantage of unambiguously denoting an automobile without additional context, which is unlikely to be true of the other words.

Regional note: While it is true that jalopy originated in the USA, it appears to have been adopted in the UK as well, perhaps owing to the American military presence coinciding with the word's peak in popularity. Also note that jalopy has not been surpassed by junker or clunker in either British or American English, according to ngrams, though it must be noted that this does not reflect the spoken language:

Archaic: If we take archaic to mean having the characteristics of the language of the past and surviving chiefly in specialized uses (m-w.com) then yes, "jalopy" is archaic, as "somewhat old-fashioned" was intended to indicate. However, a list of archaic words found at http://www.oxforddictionaries.com/us/words/archaic-words-american consists mostly of words that are far less familiar than "jalopy." It appears to be a question of where we draw the line.

It is also possible that jalopy is enjoying a revival, as evidenced by the popular culture references mentioned in the comments.

An old car in poor condition: they’ve only got an old banger

On a family visit to Windsor Safari Park just to get used to his new car, a jumpy old banger with steering wheel stick-shift gears, Ron was flagged down by a policeman.

They are not supposed to be working but their entrepreneurial skills include buying old bangers at the car market and fixing them up for resale.

You can amplify your meaning with the adjective clapped-out:

(of machinery or appliances) worn-out; dilapidated.

You might consider one of the many slang words for such a car -- hooptie, junker, clunker, beater, etc.

In Australia, a poorly maintained/rusty car is called a "bomb" or a "bomby car" and described as "bomby".

'Look at that bomby Falcon - it's the rustiest thing I've ever seen!'

Here's a noun that can fit your description: rattletrap

something (such as a car) that is old, noisy, and not in good condition

Mate, my car's a shitbox. Barely gets to the local pub before she shits herself.

Before you flame me for profanity (if you even consider that word profanity in this day and age), here's a link to an official rally that is run here in Australia. http://www.shitboxrally.com.au/

old, used a lot, and not in very good condition

That's the actual example from Oxford

A cursory synonym search didn't yield many words applicaple to cars, except this (sort of):

(Especially of a house or vehicle) in a state of severe disrepair: a ramshackle cottage

I'd go with battered, though.

an untidy or dilapidated place or vehicle.
"they climbed back in the heap and headed home"

worn out or ruined, because of age or neglect

'a row of decrepit houses'

Some information on the 'decrepit car' is given through Wikipedia

Using two words will give you an 'old banger' (noun:British informal):

an old car in poor condition

'they've only got an old banger'

3 informal An untidy or dilapidated place or vehicle:

My 1940 Ford Fordor that is mostly original parts is a survivor, but that term is used only by hot rod enthusiasts.

Flivver comes to mind also beside modern slang terms. The use of jalopy superseded flivver over time but flivver has this nostalgic feel.

A flivver is an American slang term used during the early part of the 20th century to refer to any small car that gave a rough ride, esp. one that is small, inexpensive, and old. A contemporary term was a "Tin Lizzy" (referring to a Ford Model T). Wikipedia 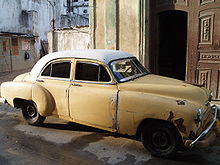 It is an outdated term itself but it is still used, especially in novels.

The luge is the Swiss flivver.

Flivver is also used for cheap and old aeroplanes. The Ford Flivver was a single-seat aircraft introduced by Henry Ford as the "Model T of the Air". 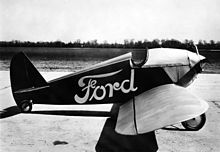 An Embarassment of Choices (For Describing an Embarrasing Car)

Another possible term is bucket of bolts2

a machine which is old run-down, or worn out

another possibility is death trap2

Man, we had to ride in this old car to get to the mall. Things were clanking and the breaks were like almost gone on the thing. That car was nothing more than a death trap, and I am surprised we made it there and back in one piece.

It's a niche British English use for a cheap knockabout car.

: in very bad condition because of age or lack of care

All of my cars in the '70s were "beaters." Aka "rust-buckets" or "heaps." And a few were quite literally possible "deathtraps." (Like the one that dropped a tie rod in a.m. rush-hour traffic on a 4-lane highway; or the engine fire in the middle of the night, on a rural desert road; to fondly recall a couple.) These were the most common names we used for our "junkers" in the Midwest US at the time. A bit of trivia - Average cost: $100-150. Average lifespan: 6-9 months. Money back at the junkyard: $50.

"beater car" is the term I use for my old beat up backup/don't care where I park/leave it car.

An old kronk, a clapped-out motor are my favourites. More over at Wikipedia.

I live in the city, and I hear it particularly from older guys, but may I suggest

Usage: "Your hoopty's missin a hubcap, man!" If I remember correctly, it's got origins in Detriot, but someone might have to check me on that.

If you're trying to describe a car that only looks old and worn out but still runs well, consider rat rod: a style of antique car restoration which leaves rust and other effects of time unaltered, or even simulates them.

'dilapidated vehicle' is the best that I can think of. Cheers!

something that is useless because it fails to work or to work properly:

I soon realized the van was a lemon.

In Cars 2 they use the word lemon many times to describe old rusty cars that malfunction all the time:

The world turned their backs on cars like us. They stopped manufacturing us, stopped making our parts. The only thing they haven't stopped doing is laughing at us. They've called us terrible names: jalopy, rust bucket, heap, clunker, junker, beater, wreck, rattletrap...lemon.

: Worn out by long travel on roads, or (figuratively) in a damaged or depleted state due to constant or prolonged usage or exertion.