What is the job title of these municipal officers?

In some countries, specially in Asia, some vendors spread their stuff for sale on the ground (upper picture), and thereby cause trouble for the pedestrians comeing and going. For preventing this, there are some officers whose job is preventing those vendors from selling their stuff in the sidewalks!

Is there any special word or phrase for referring to those **officers whose task is to alleviate street congestion"?* (lower picture) 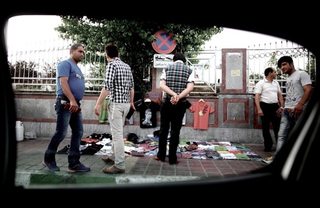 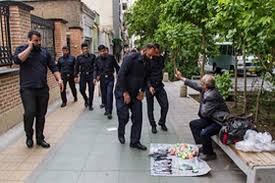 In the US such activities are generally regulated by city or municipal ordinances and often enforced by ordinance enforcement officers or just ordinance officers. These officers may deal with parking, zoning, codes and so on. Larger cities will have specialists for each type of orninance, but in smaller ones a single officer does duty in multiple areas.

In the US, It depends on whether the vendors' "stuffs" (sic)* includes food. If it does, the enforcement is more likely to be for a violation of health-related licensing requirements, so it would be done by (County) Health Department inspectors, who would not just tell them to move out of the way, but would force them to shut down operations until they could get the proper permit(s).

If the selling is actually blocking traffic, police officers would be called to disperse the street merchants. This might be performed by the traffic enforcement division of the police department—the same people who would ticket illegally parked cars.

*"stuff" is generally a non-count noun

Municipal Corporations are in to various spheres - including "property management" like property santitation,taxation,usage etc. They usually have officers to look after hygeine and property usage for assigned areas. And as such Municipal Administrators are the ones you could check with.

Ideally you may want to check with "encroachment" and/or "enforcement" division to update and request action for people causing incovinience and encroaching pedestrian rights. But I might suggest humanitarian view and let them continue earning their livelihood and not further stomp them because you could.

I am glad I could assist you.

Not the answer you're looking for? Browse other questions tagged expressions phrase-requests or ask your own question.

3
What expression are these titles alluding to?
2
What do you call these people on the street?
2
What does “none the worse” mean in these cases?
1
What is the word or term used to describe when a simple job is made unnecessarily difficult?