I was editing a question about the alleged dangers of shaving a dog. 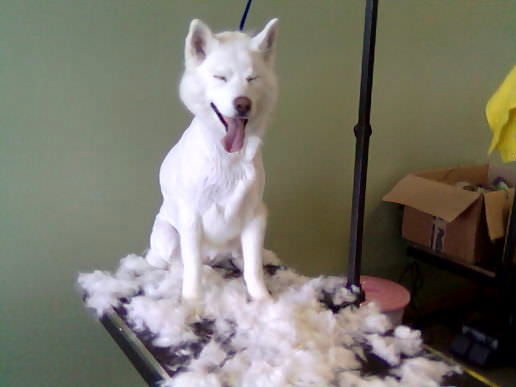 To me, this dog hasn't been shaved, i.e. removing all of the hair down to the skin, especially with a blade. This dog has been shorn - removing most - not all - of the coat with clippers, or perhaps clipped.

Examining a dictionary didn't clarify this distinction, making me wonder if I am making it up.

Is it standard usage to describe clipping the coat from a dog as "shaving", or would correcting it to "shearing" be preferred?

There seems to be a significant diversity in dog grooming terminology. Several popular online resources refer to dogs being shaved rather than shorn, clipped or stripped, as in The LP Grooming Guide, published by the Loose Pooch Kennel Club:

Cocker Cut ... The face is shaved and some pet parents like to leave the head furry,while others prefer it to be shaved along with the top 1/3 of the ear...

Lion Cut ... The rear end of the body is shaved close to the skin while the top part is left long to attain the lion look...

Poodle Face: Typically done on poodles, we are (sic) shave the face clean and very close to the skin...

Tipped Ears ... Some breed cuts have what we call tipped ears. This means the top 1/3rd of the ear is shaved leaving sharply pointed ears...

Poodle Feet: Just like the above mentioned clean face, clean feet are completely shaved exposing the nails and the entire foot up to the ankle area.

GI Cut is a full strip all over the body including the head, ears, and tail. EVERYTHING gets shaved.

Kennel Cut: Many of you out there use this term broadly to mean an all over shave down. In the dog grooming world, a kennel cut is an all over length set either with a blade or a guide comb, but with clean face and clean feet as well as a topknot.

Fanny: A strip shaved from the anus down to the belly area for those dogs that are extremely hairy around the backend like Pomeranians and chows...

Shell Out: A shell out is when the belly area is shaved all the way up to the arm pit area and includes the arm pits...
Emphasis added

The #10 blade is the shortest blade used for shave downs, leaving the hair short and smooth...

.#5 blade – This blade is great for short cuts, but will not show skin. It is perfect for sensitive skin or dogs with white hair because those dogs typically show skin when shaved too short.

Some dogs with undercoat or even those that have straight or wiry hair require a different techniques for shaving than other fluffier haired dogs. To create a super smooth look you sometimes need to shave with a blade in reverse. “In reverse” is a dog grooming term that simply means you shave against the grain of the hair, or from the back of the dog toward the front...

Tight Feet – Tight feet are kind of in between clean feet and rounded feet. They expose the nails, keep the feet free from matting, but are not shaved close to the skin.
Emphasis added

The article Common Dog Grooming Terms Explained, by Petco, concurs with this popular terminology, as does the Canine Groomer’s Glossary.

Other popular resources refer to dogs being clipped and shaved, as in the article An Introduction To Clipping Your Dog, by DIY Dog Grooming:

Clipping is the process of using dog clippers and a blade to shave the dog short. The clippers can be used over the body, down the legs and around the face... The face can be either shaved or if you prefer scissored.
Emphasis added

Although it is not entirely clear what grooming operation is referred to, The American Kennel Club uses clip, but not shave, shear, or strip in their online glossary:

The method of trimming the coat on some breeds.

In the UK, Grooming terminology, by 4 Paws Dog and Cat Grooming, uses clipping in general, reserving shave for a specific type of clipping close to the skin:

As a rule we always prefer to groom your dog according to the characteristics of its breed. That means defining the looks and character of the breed and coat texture, and grooming in line with how best the coat be maintained e.g. clipping or hand stripping...

This is basically a close shave to the feet and is typical for breeds such as Poodles and Bedlington Terriers. For Spaniels and similar breeds we’ll clean feet back tidy but won’t shave them.
Emphasis added

Although there is ambiguity, the consensus seems to be that stripping is a unique grooming operation that uses special tools to pull hairs out by the roots rather than cutting them. The process is described in the article Stripping: Reveal Your Wirehaired Dog's Show Quality Coat, by Pet Place:

Stripping vs. Clipping
A wire hair has a hard point, but is soft near the base. Clipping removes that hard end, and the soft, faded portion grows farther out. Stripping removes the entire hair from the follicle, allowing for a new, wiry, brightly colored hair to grow.

It seems that clipping is the unmarked expression in the industry, so clipping would be a good general term to describe what happened to the dog in the OP. Because the hair was clipped so close to the skin, it also seems appropriate to add specificity by saying that the dog was shaved. Since there is no central authority to determine these grooming definitions, it seems wise for authors to establish working definitions of their terminology, and for speakers to confirm the definitions they are using in conversation.

We might have intuited the word shear, which seems to be distantly related to shave beyond the antiquity of Proto-Indo-European:

A complementary answer discusses the distinction of tools and cutting action associated with shave and shear. In addition to that distinction, shave is now used predominantly for removing hair from humans, and not so much for animals:

1.0 [NO OBJECT] (Of a man) cut the hair off the face with a razor:
he washed, shaved, and had breakfast

1.1 [WITH OBJECT] Cut the hair off (a part of the body) with a razor:
she shaved her legs

1.2 [WITH OBJECT] Cut the hair off the face or another part of the body of (someone) with a razor:
his wife washed and shaved him

1.3 Cut (hair) off with a razor:
professional male swimmers shave off their body hair
ODO

In its literal sense, shear is predominantly used for removing hair from animals, and less often for humans :

1.0 ... [WITH OBJECT] Cut the wool off (a sheep or other animal):
Paul has never sheared a sheep before
(as noun shearing) demonstrations of sheep shearing

1.1 Cut off (something such as hair, wool, or grass), with scissors or shears:
I’ll shear off all that fleece
ODO

Perhaps because they are man's best friend, dogs seem to be an exception to this human/animal distinction:

Whatever you call it, removing the hair from a yak can be hazardous to your health! 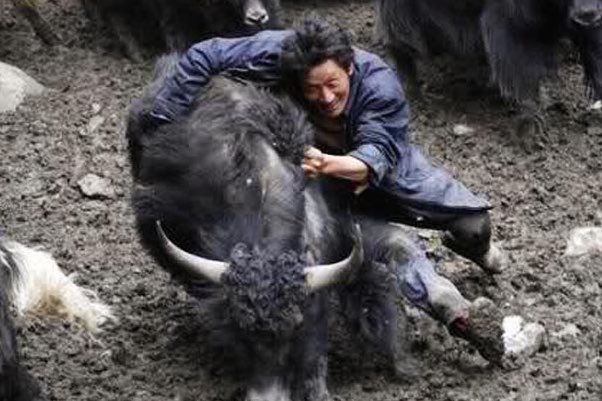 My wife is a Dog Groomer. There are two ways of tidying a dog's coat. These are the terms used by the Kennel Club in Britain. The 'Breed Standard' for a pedigree show dog will define how the coat of a particular breed of dog should be prepared.

Clipping is the term used when using either manual or electric clippers. Even when taking the coat to a very short state. Thus the dog in the picture has been clipped very short.

Stripping is the term for removing the undercoat while leaving the longer hairs trimmed.

The term shaving would only be used if a razor were to be used and that is normally only done for veterinary reasons.

The difference between to shear and to shave, which lexicographers may or may not clearly describe, lies in the type of cutting implement, which affects the nature of the cut.

One shears with scissors or clippers (or a mechanical device that employs multiple small blades in a scissoring action), whereas one shaves with a single bevel-sharpened blade pressed against the skin.

Anticipating the "what about the electric razor"? It consists of multiple tiny bevel-sharpened blades each of which presses in turn against the skin, or as close to the skin as the protective shield will allow them to get.