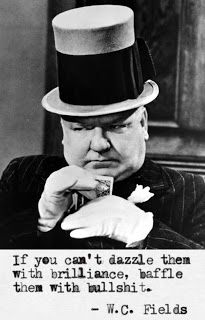 10
Verb for replacing common words with unnecessary jargon?
0
Name for using a big word where a small word would suffice?
17
What is the name of the tactic that politicians use to bury people with torrent of words?
10
Is there an English word meaning "the use of uncommon words"?
3
What do you call the rhetoric strategy of purposely writing a paragraph that no one can understand?
7
Is there a word for the concept of attributing genius to something simply because it's incomprehensible?
0
Sudden popularity of: obfuscate, why?
1
Word for "Trying to confuse people with Scientific and technical jargon"
2
Synonym for "bullshit" in a status meeting

2
Opposite of "blaming people"
13
What are people who 'flee' called?
9
What are "good men that do nothing" called?
3
Word for flaws associated with an overly rule-based cognitive style
2
What is placing name with something called?
1
Word for "Trying to confuse people with Scientific and technical jargon"
28
What are the words for people who cause trouble believing they know better?