Is there a single word used in English for the visibility of dust particles floating in a stream of sunlight? 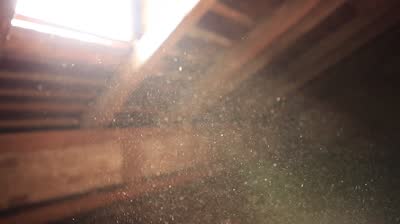 There is an uncommon word, dustlight, mainly appearing in literary works. It may serve as a single word for the whole phenomenon to describe the interplay between dust and light.

...there was no alternative but to count the remnant of the family savings in the feeable ray of moted dustlight that filtered down from the dingy opening.

The Possession of Immanuel Wolf: And Other Improbable Tales by Marvin Kaye

Beyond the dogs, the bottle, the old man, I saw santuario receding from view, glazed as it were by the scrim of dustlight.

However, you can use mote to define the floating dust in sunlight:

A particle of dust, esp. one of the innumerable minute specks seen floating in a beam of light; (contextually) an irritating particle in the eye or throat. [OED]

An example from OED:

Moving freely about like the motes we see in the sunbeam.

Scientifically, the phenomenon is light scattering.

You can check further details in the following links:

The most widely-used technical term is 'scatter', and this is studied in Physics (Light), Astronomy, Meteorology and Hydraulics (measurement of flow). (click @ermanen's link)

Many authors say 'scintillate', for the light-effect, but always 'motes' are mentioned; so, scintillation by itself might not work.

Home By Marilynne Robinson
A few motes of straw managed to scintillate in any shaft of sunlight.

The definition from Lexico:

Of light: full of motes.

You could, circumstances being appropriate, call the dust murk. Though it'd have to be sun shining into an otherwise gloomy place. And it's not specifically the sun-illuminated dust, but all the dust.

An adjective for the air is turbid, in that it has suspended particles.

motes/sunbeam/Tyndall effect are all more appropriate given the photo. Just adding some more terms in the event someone's not satisfied with the more straightforward words.

The diffuse light from the sky, scattered by air molecules, as distinguished from the direct radiation from the sun.

Tyndall effect, also called Tyndall phenomenon, scattering of a beam of light by a medium containing small suspended particles—e.g., smoke or dust in a room, which makes visible a light beam entering a window. The effect is named for the 19th-century British physicist John Tyndall, who first studied it extensively.

It's called a colloid! It's a chemical term that means evenly dispersed particles in gas solid or liquid.

0
How do you describe bits of hay floating in the air?
26
English equivalent of komorebi (木漏れ日) — "sunshine filtering through leaves"
1
What's a word for "Scattering of light by water droplets in the air" like the tyndall effect